With Covid-19 still affecting economies across the globe, the "World Energy Outlook 2020" from the International Energy Agency (IEA) comes with a greater level of uncertainty that past reports, but its message is still clear: Renewable power is rapidly overtaking fossil fuel power, but meeting global needs for carbon reduction will require a transition at a rate more rapid than is occurring today.

For 2020, global energy demand is expected to fall by 5% from 2019, and energy-related CO2 emissions will fall by 7%. Demand for coal (-8%) and oil (-7%) are most affected, while demand for gas will fall by 3%; renewables will rise by less than 1%. But the setbacks are seen as temporary, probably lasting through 2021 as a vaccine is developed to halt or at least severely slow the spread of Covid-19. 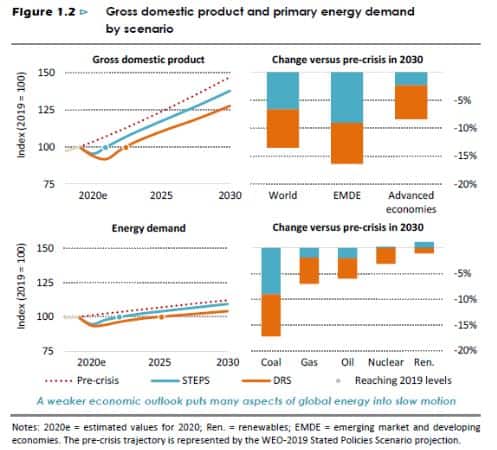 The question, according to IEA, is what happens in the next decade. "It is too soon to say whether today's crisis represents a setback for efforts to bring about a more secure and sustainable energy system, or a catalyst that accelerates the pace of change. The pandemic is far from over, many uncertainties remain, and crucial energy policy decisions have yet to be made," the IEA's report states.

IEA presented three scenarios: Stated Policies (STEPS) in which Covid-19 is brought under control in 2021; Delayed Recovery (DRS) in which the global economy does not return to pre-crisis size until 2023; and Sustainable Development (SDS) in which the recovery matches STEPS, but with a greater commitment to sustainable energy investments. A fourth model, Net Zero Emissions by 2050 (NZE2050) is the most far-reaching, as it represents IEA's first detailed forecast of how the world could accelerate the energy transition. 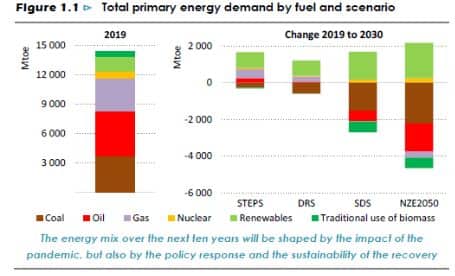 Below are brief summaries of the key conclusions of the three primary forecasts:

Regardless of scenario, IEA forecasts that solar energy will represent the majority of new investment in power generation around the world. "Renewables grow rapidly in all our scenarios, with solar at the centre of this new constellation of electricity generation technologies. Supportive policies and maturing

technologies are enabling very cheap access to capital in leading markets. With sharp cost reductions over the past decade, solar PV is consistently cheaper than new coal- or gas-fired power plants in most countries, and solar projects now offer some of the lowest-cost electricity ever seen," IEA said. "In the STEPS, renewables meet 80% of the growth in global electricity demand to 2030…as it sets new records for deployment each year after 2022, followed by onshore and offshore wind." 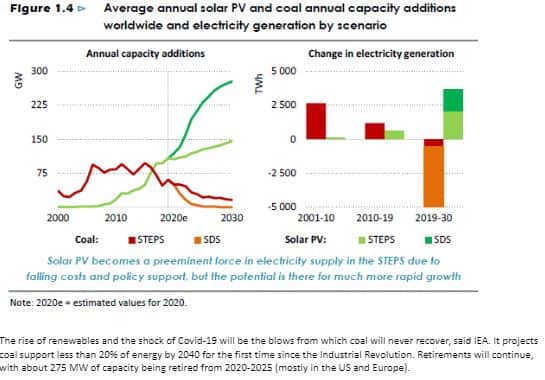 s noted above, oil demand will be flat, as the gains from an economic recovery will be offset by efficiency of the vehicle fleet and expansion of the use of electric vehicles in all applications. As for natural gas, IEA sees a strong rise in Asia through 2040 of about 30%, but it added, "This ist he first WEO in which the STEPS projections show gas demand in advanced economies going into slightly decline by 2040."

Given the trends for fossil fuels, IEA highlights the financial risks for companies and nations that are dependent on the revenue from oil and gas production. "Lower prices and downward revisions to demand, resulting from the pandemic, have cut around one-quarter off the value of future oil and gas production," it said. "Now, more than ever, fundamental efforts to diversify and reform the economies of some major oil and gas exporters look unavoidable."

In the US alone, shale producers have written down an estimated $50 billion in assets in the last year, which IEA called "a palpable expression of a shift in perceptions about the future." 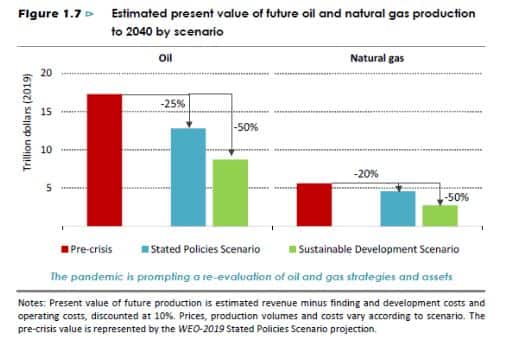