Even as installations of onshore and offshore wind power continue to increase around the world, several of the largest turbine manufacturers and installers say supply chain difficulties are interfering with the industry's ability to reach its potential.

In quarterly earnings announcements in the last month, three of the five largest wind turbine original equipment manufacturers as tracked by the Global Wind Energy Council—Vestas, GE Renewable Energy, and Siemens Gamesa—bemoaned COVID-19-induced supply chain delays and the rising cost of steel used to manufacture turbines. And while two of the companies scaled back their 2021 earnings guidance, all three said the outlook beyond this year is very promising.

The other top five companies, Goldwind and Envision, are based in China and do not release a great deal of financial or operational information publicly. 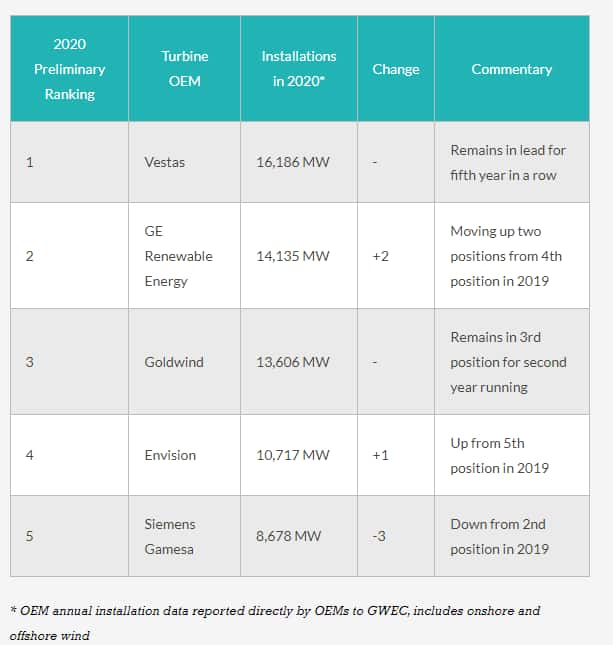 Executives' comments affirm findings by IHS Markit in its quarterly industry review, published in May. "Sharp price increases in steel, copper, and aluminum were recorded in the later part of 2020 due to the rebound in global consumption. These will put cost pressures on wind turbine manufacturers in the near term before prices stabilize," IHS stated.

High prices have persisted throughout the summer. For instance, the front-month US Midwest hot-rolled coil steel futures contract stood at about $1,880/metric ton (mt) on 11 August. The front-month was about $550/mt in August 2020, representing a jump of 240% since that time.

With the cost of steel at record levels in North America and well above historic averages in the other key markets of China and Europe, IHS Markit said it would take until the end of 2021 for the market to balance enough for prices to fall back to 2019 levels.

However, IHS Markit said the global pandemic "hardly dented confidence in the offshore wind market," with record new investment commitments in 2020 of more than $27 billion for 7.8 GW of projects. The pace is accelerating, as the first quarter of 2021 showed another 3.9 GW of projects ($11 billion) reaching final investment decision (FID).

Trade group WindEurope has a similarly optimistic picture of current and future installations. Europe connected 1.3 GW (166 turbines) of offshore wind to the grid in the first half of 2021, it reported on 11 August. "The installations took place in the UK, Denmark, and the Netherlands, all in the North Sea," it said. Those three countries, plus Germany and Belgium, account for nearly 81% of Europe's 26.4 GW of existing offshore wind capacity.

Eight wind farms are under construction, for another 5.4 GW of capacity, and WindEurope said another 2.6 GW of new offshore capacity was financed for a total €7.4 billion ($8.7 billion) in the first six months of the year.

Those figures do not include the UK's major ScotWind auction in July.

However, in the short term, comments from the top wind turbine manufacturers reveal the pressure points as well as the opportunities.

Vestas, which has topped the annual installation volumes table for the past five years, showed slower-than-expected growth in the first half of 2020, due to "supply chain constraints in key markets," CEO Henrik Andersen said on 9 August.

"We've also seen here that some of the logistical challenges and supply chain bottlenecks have probably been amplified by the COVID-19 restrictions in some of our strategic markets," he told analysts. "We have seen a cost inflation further accelerated [in] a number of raw materials and also components…"

CFO Marika Fredriksson referenced another cost issue as well: transportation. With shipping channels bottlenecked for all types of goods, she said the company has faced slippage on project deadlines because materials have not been delivered. "You have cost increases, but you also have scarcity," she explained. "So, it is the changes that are the most costly part."

Asia is particularly troublesome now, especially in countries such as Vietnam where "you have a complete lockdown so you cannot install the projects," she said. "So, it is the sort of unprecedented situation due to the pandemic as well as the cost inflation. A little bit unfortunately of a double whammy from that perspective."

Still, the company has scaled back its spending in 2021, which was reflected in its earnings guidance. "The expectations are now a revenue of €15.5-16.5 billion (previously €16-17 billion), including service. Total investments are now expected to be below €1 billion in 2021 (previously approximately €1 billion)," Andersen said.

The reductions reflect short-term delays in some decisions, Andersen observed. "Whenever you have a price or a cost adjustment to the magnitude of what we are experiencing now, customers will go back … and revisit their internal processes, either for internal approval of investment committees or external financing," he said.

On the positive side, he noted that inflation in Europe has affected the price of electricity, which is beneficial for new projects. In Europe, he said the rate in a new power purchase agreement is about €70/MWh now, compared with about €20/MWh a year ago. "From a customer point of view, I think it's about connecting also the full value chain" of zero-carbon power, he said.

GE Renewable Energy, second in the 2020 global rankings, reported a steep drop in orders for wind turbines for new projects in the April-June quarter, falling to 398 units in 2021 from 645 units in the same period in 2020. But its repower (retrofitting and refurbishing) business nearly tripled to 349 units from 118 units. Overall, the company's renewables business, which includes services as well as installations, saw a revenue increase of 16% year on year in the quarter to $4 billion.

"While both onshore and offshore equipment orders are lumpy, we expect them to increase significantly in the second half versus first half," said Carolina Dybeck Happe, General Electric Company CFO, in a 27 July call with analysts.

In the US onshore wind sector, GE expects near-term decline, said Happe. Ironically, she said an extension of the US production tax credit for solar, which would be immensely helpful in the long run, would likely reduce demand in the short run because it would lessen the urgency of FIDs.

In the offshore market, GE Renewables is the supplier of the Haliade-X turbines, whose blade tips can be more than 260 meters (853 feet) above the sea. GE Renewables signed an order in Q2 for 87 turbines for Dogger Bank, the world's largest wind farm, which is located off England's east coast, and an order for turbines at Vineyard Wind, the first US offshore wind farm.

"We are operating in what is currently a very difficult environment and have taken additional steps to balance our risk profile as we focus on delivering long-term sustainable profitability," said Andreas Nauen, Siemens Gamesa CEO, in a prepared statement on 30 July.

Whereas Vestas said Asia's lockdowns are a challenge, Siemens Gamesa is struggling in Brazil. "The impact of these elements has been exacerbated by the pandemic, especially in countries like Brazil where we face supply chain shortfalls and execution-related bottlenecks," Nauen said.

Deliveries of some next-generation Siemens Gamesa 5.X onshore platforms, being developed in Brazil, will be delayed into 2022 and 2023.

The company said full-year revenue will be at the low end of its prior announced range of €10 billion-€10.5 billion.

One way the company is addressing unpredictable costs is through escalator clauses on the steel towers in its projects, tied to commodity prices. "In addition to such mechanisms, Siemens Gamesa continues to incorporate cost inflation into contract pricing and to ensure the necessary procurements to execute its backlog in FY22," the company said.

Still, Nauen said the company is enjoying "the huge potential of wind energy, which is reflected in our strong order backlog."

Its Asia operations were particularly strong, as the company finalized a deal to supply Taiwan's largest offshore project to-date, the 1.044-GW Hai Long facility. "The company continues to work very closely with customers to prepare for the large volume of auctions expected in 2021 (17 GW projected in the next six months in the offshore market) and subsequent years, given offshore wind's role as the top energy source for attaining [Taiwan's] decarbonization targets," it added.

Indicative of its optimism about the future, on 9 August Siemens Gamesa announced that its Hull, England, turbine blade factory will be more than doubled in size through an investment of £186 million (approximately $257 million) and retooled for the "manufacturing of next-generation blades in 2023." The facility has made more than 1,500 blades since opening in 2016.

Despite the promising outlook, the Global Wind Energy Council urged the world's largest energy users to upgrade their commitment to onshore and offshore wind.

In an open letter, the top executives of wind industry companies reminded G20 leaders that planned wind energy installations fall short of the energy needs of a decarbonizing world. "Should this pace of growth persist, we will fall short of the wind capacity required for carbon neutrality by 2050 by 43%, and effectively be condemned to fail in our collective climate goals," the CEOs wrote July 19 in a letter that the trade group coordinated.

They noted that a record 93 GW of wind power was installed in 2020 despite the global pandemic, largely in China and the US, but that "annual deployment will have to quadruple in the next decade to set big economies on the path to reach climate targets."

"However, this will be unachievable without decisive and urgent policy change across the G20 countries," they added.

They called for national targets for wind energy, aimed at supporting a 1.5 degrees C maximum global temperature increase compared with pre-industrial levels. A "cohesive" net-zero strategy by each nation must include "rapid buildout of clean energy, including grids and transmission," they added.