The latest draft of Vietnam's 8th Power Development Plan (PDP8) shows a ramping up of its intentions during the next decade away from coal-fired power and toward renewables and natural gas, even as the country seeks to keep up with rapid demand growth.

The Vietnam Ministry of Industry and Trade released the third revision of PDP8 in February, and it covers the period 2021 through 2030, supplemented with a more general outline of intentions through 2045. A final draft is expected in the second quarter of this year.

In contrast with the current PDP7 strategy, PDP8 scales back coal-fired power significantly — showing Vietnam's intentions to reduce its GHG emissions as well as to reduce its dependency on imported fossil fuels.

PDP8 proposes no new coal-fired power plants except those already under construction or planned for completion by 2025 or sooner. A total of 13 coal projects on the books for 2026-2035 would be canceled if the plan is adopted.

However, as IHS Markit pointed out in a report, fossil fuels are a long way from exiting Vietnam's power market. "The draft PDP8 envisions gas-fired power as the backbone of the power system," wrote Cecillia Zheng, IHS Markit principal analyst-power, in an analysis in April. "Thermal capacity addition remains significant in the plan, with 39 GW of thermal capacity (17 GW coal and 22 GW gas/LNG) projected to come online in the next decade, as opposed to an additional 19 GW of solar and wind capacity in the same period."

Coal and gas will have a combined market share of about 57% in 2030. "The plan clearly prioritizes gas power projects to replace coal," Zheng wrote. 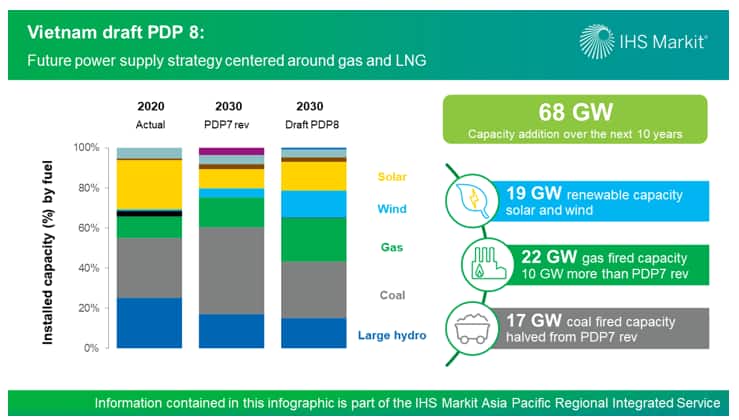 Currently, Vietnam obtains about 22% of its power from hydro, but The Borgen Project, an international development organization, said new projects are limited by geopolitics. "Hydropower in Vietnam is mostly reliant on the Mekong-Delta, a river that many countries have access to. As a result, it is vulnerable to how other nation-states utilize the river with infrastructure projects that restrict the river's flow and intensity," The Borgen Project said.

Any review of Vietnam's energy planning must take into account that its power demand has grown by about 10% per year for the last decade, one of the fastest rates in the world. The COVID-19 pandemic slowed this trend slightly, according to the Asian Development Bank, but power demand nonetheless increased by 7.5% in 2020 to 225 Terawatt-hours (TWh).

Alongside an economic recovery, Vietnam's power demand will increase by nearly 10% per year to reach 335 TWh and 491 TWh by 2025 and 2030, respectively, according to IHS Markit.

As a result, Zhang explained in her report, even significant increases in renewable capacity cannot keep pace with power demand, let alone start to replace fossil fuel-fired power as is being seen in more mature economies.

For this reason more than any other, Vietnam's announced goals for reducing GHG emissions in this decade are modest compared with most countries.

Speaking at the Leaders Summit on Climate last week, Prime Minister President Nguyen Xuan Phuc said Vietnam is aiming to reduce its GHG emissions by 9% from 2005 levels by 2030, using internally generated investment. But this goal could be increased to 27% if sufficient international funding is provided to support more rapid turnover of the power generation fleet, he said.

Investment in the grid will not only expand transmission lines, but it will also better accommodate renewable power, according to the ministry. The ministry proposed extensive revisions to the grid code last year to accommodate non-synchronous generating systems that are typical of renewable power operations, and they are in the process of being implemented.

IHS Markit said the plan revealed Vietnam's "development constraints, such as fuel supply, infrastructure development, power supply reliability, lack of investment support, and the need for market reform ... [and] does not fully address the key concerns or provide a practical approach to achieve the long-term targets."

Including added fossil fuel power plants, IHS Markit estimates that 84% of thermal generation will use imported fuel in 2030, which Zheng said "rais[es] concerns about energy security."

On the positive side, she observed that Vietnam's grid investment plan includes goals of having 90% of the thermal power (coal, gas, oil) transmission grid meet the highest standards of reliability by 2025, and for 100% to meet it by 2030.

The Institute for Energy Economics and Financial Analysis (IEEFA), a nonprofit, criticized the planning mindset on which PDP8 was based, saying it ignores improvements in the relative costs and reliability of renewable generation.

"Traditional power sector planning disciplines [in Vietnam] were developed during a period when technology was relatively static and generation-led planning was the norm. That is not the right approach for an unprecedented period of innovation and cost reduction we are witnessing now," IEEFA said in a report in March. "This calls for a fundamental shift away from the traditional planning approach of assessing technology choices on an 'as is' basis to a pathway development process that sees each generation technology more holistically."

Most prominently, IEEFA said the cost of renewable power available to Vietnam's developers has fallen by 90% for solar PV and 70% for wind from 2009 through 2020. Coal power's price has been static during that time, but the plan for the next decade does not reflect the relative shift in costs, nor "designing the system in a way that can optimize a complementary portfolio of technologies," IEEFA said.

IEEFA was particularly critical of caps on solar and offshore wind capacity at 2 GW each in PDP8, which it said are driven by reports that the intermittency of renewable power could be harmful to the national grid. But IEEFA said these limitations "could have severe implications that would reverberate across the wider economy," in terms of keeping the country dependent on imported fossil fuels and undermining its environmental goals.