Two tracts in waters off South Carolina and North Carolina enticed combined high bids of $315 million from the pockets of Duke Energy and TotalEnergies in the US Bureau of Ocean Energy Management (BOEM)'s latest offshore wind lease auction 11 May.

While the high bids for lease areas capable of siting 1.3 GW of capacity were not in the same zip code as the combined $4.7 billion forked over in February's record-breaking New York Bight lease sale, industry observers say the auction maintained momentum in the Biden administration's push for 30 GW of capacity by 2030.

Atlantic leases are prime (and pricey) locations for offshore assets because winds are the strongest in the region during the afternoon and early evening, concurrent to peak demand. But the latest auction did not break the bank, relatively speaking, analysts say.

The two lease areas in the Carolina Long Bay auction are slightly bigger than the most modest of the February New York areas at 54,937 and 55,154 acres, respectively. However, that relatively compact 43,056-acre plot of New York seabed (which was estimated to be able to offer some 523 MW of capacity) still managed to attract a high bid of $285 million by itself.

TotalEnergies' presence in the winners' circle underlines oil majors' ongoing push into offshore wind in general, and lease areas in US East Coast waters in particular. The Carolina Long Bay auction is TotalEnergies' second auction win this year in a BOEM auction. 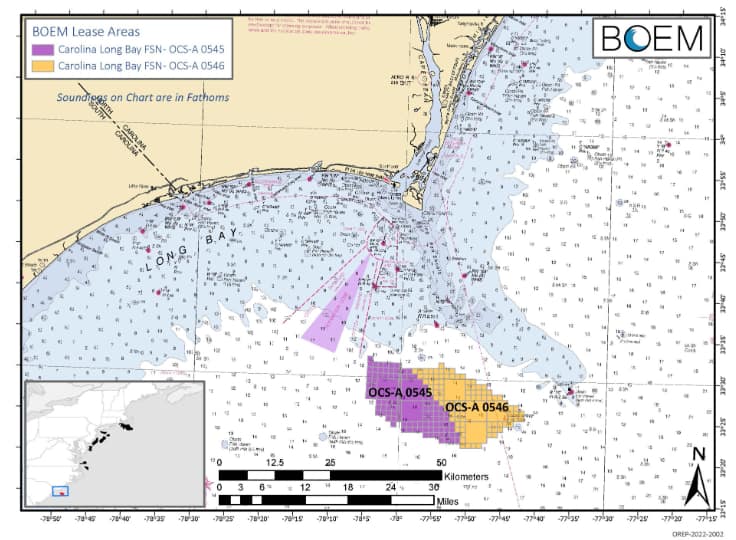 However, this is the first time Charlotte, North Carolina-headquartered Duke has put its toe in the water, so to speak. Duke, the biggest electricity provider in both its home state and South Carolina (where it just pips a unit of Dominion Energy for top spot), needs to build more renewable capacity to meet goals set by North Carolina Governor Roy Cooper.

Cooper issued a June 2021 executive order that laid out 2.8 GW by 2030 offshore wind target and 8 GW by 2040 goals for the state. The company also expects any wind farm resulting from the auction win to contribute to a proposed carbon plan it expects to file with the North Carolina Utilities Commission on 16 May, it said.

"Securing this lease creates optionality for future offshore wind if the North Carolina Utilities Commission determines it's part of the least cost path to achieve 70% carbon reduction by 2030 and net-zero by 2050," Stephen De May, Duke Energy's North Carolina president, said in an 11 May statement released after the results of the auction were announced.

Duke, which is already the US' largest nuclear power plant operator, said it expects to begin site assessment of the OCS-A 0546 lease area in 2023, and foresees an in-service date in the 2030-2032 time frame.

TotalEnergies, meanwhile, has been on a buying spree in the US since the start of the year. In February, it teamed up with Germany's EnBW to pay $795 million for lease area OCS-A 0538 in the New York Bight auction, which could accommodate as much as 3 GW of capacity. Days later, the French company bought its partner out. It also took over the rest of EnBW's US portfolio, including the proposed 1-GW Castle Wind project.

On 27 April, TotalEnergies then bought Core Solar, adding 4 GW of US photovoltaic projects to its pipeline, and raising its US portfolio to 10 GW. The acquisition of Core Energy showed how TotalEnergies is looking for proven business models for a significant part of its energy transition, Dhroov Sharma, research analyst, S&P Global Commodity Insights, told Net-Zero Business Daily when the deal was announced.

The New York Bight win and EnBW deal, TotalEnergies CEO Patrick Pouyanné said in February, was a "grand entrance" into the US offshore wind market, and part of an ambitious plan to reach 100 GW of renewable generation capacity by 2030.

Prior to its US debut, TotalEnergies was already developing 10 GW of offshore wind capacity around the globe, including the French floating Eolmed project on which construction began earlier in May, and in the UK, where it was successful in the 10-GW ScotWind auction.

S&P Global Senior Research Analyst Samantha Bobo told Net-Zero Business Daily 12 May that TotalEnergies is already fairly established in offshore wind in Europe so the US is the next best market option to keep expanding its business. Bobo said market watchers should expect the French energy major to be a competitive bidder in auctions of California leases.

BOEM is scheduled to hold northern and central California lease sales later this year. Further auctions are expected on the US West Coast beyond those in California. On 27 April, BOEM published calls for information and nominations for possible leasing in areas off the coast of Oregon.

The California Energy Commission, meanwhile, said 6 May it expects the state to be able to develop at least 3 GW of floating offshore wind energy by 2030, and as much as 20 GW of floating wind energy by 2050 to meet its climate and clean energy goals. AB 525, passed in 2021, requires the state to meet 100% of its power needs with clean energy by 2045, with offshore wind expected to contribute a substantial proportion of that total.

In the meantime, the Carolina Long Bay lease sale had to be held before the end of June due to a Trump administration moratorium on leasing in Outer Continental Shelf waters south of Virginia, which takes effect July 1.

A repeal of the ban was included in the House-passed America COMPETES Act, but not in the Senate-passed companion bill, the United States Innovation and Competition Act. A conference of House and Senate members is currently negotiating the final version of the legislation, the Bipartisan Innovation Act. A repeal has the backing of the National Ocean Industries Association (NOIA), it said, adding that quashing the moratorium would "help ensure the door remains open for offshore wind."

The leases won by Duke and TotalEnergies aren't the first leases offered in North Carolina waters. In 2017, BOEM held a lease sale for the Kitty Hawk lease area. The lease was won by Avangrid Renewables, but little progress was made in the Trump administration years. In July 2021, BOEM said it would prepare an environmental impact study for Avangrid's 800-MW Kitty Hawk North site, the first phase of a potential 2.5 GW of capacity.

However, the leases auctioned 11 May are the start of a new era, according to one observer. "With three separate wind projects now in the area, and potentially more on the way, the Carolinas are positioned to be the next American offshore wind hub. Today's winning bids were each more than seventeen times larger than the winning bid from the Kitty Hawk offshore wind lease sale just five years ago," NOIA President Erik Milito said in an 11 May statement.

Offshore wind leasing is one piece of a bigger energy transition puzzle for the Biden administration and the US though. Phil Kangas, natural resources and renewables leader in Grant Thornton's Energy Advisory Practice, said this week he saw "substantive actions by the Biden Administration in the move toward a clean energy economy." The Department of the Interior canceled plans for auctions of oil drilling rights in the Gulf of Mexico and Alaska's Cook Inlet on the same day as the Carolina Long Bay auction.

Kangas added that the 11 May announcement of a Permitting Action Plan, which the Biden administration expects to strengthen and accelerate federal permitting by "fully leveraging existing permitting authorities" should not be forgotten either.

Bobo said, however, that while the permitting action plan is a great idea in concept, the key points are still very high level with no specific implementation plans. And James Auslander, a natural resources and environment attorney with Beveridge & Diamond law firm, was even more scathing.

"It's just the latest iteration of project streamlining policy that every administration announces," he told Net-Zero Business Daily 12 May: "Each of the last four or five administrations have put out guidance, executive orders and policy documents that do the exact same things as most of the things in the plan. Restate best practices that already exist under the [National Environmental Policy Act] for environmental reviews."