Net US greenhouse gas emissions totaled 5.769 billion mt of carbon dioxide-equivalent in 2019, a 1.7% decrease from 2018, according to the 28th annual Inventory of US Greenhouse Gas Emissions and Sinks, released by the US Environmental Protection Agency (EPA) 14 April. This left annual emissions 13% below 2005 levels, but 1.8% above their level in 1990, the first year for which EPA began collecting the data.

"While many long-term and short-term factors influence annual [GHG] emissions in recent years, the downward GHG emissions trend can be largely attributed to falling emissions in the electric power sector," EPA said in a statement.

The report came out about a week before the 22-23 April Leaders' Climate Summit, organized by President Joe Biden to bring together more than 40 nations to discuss how to speed up reductions in emissions around the world (see related article). 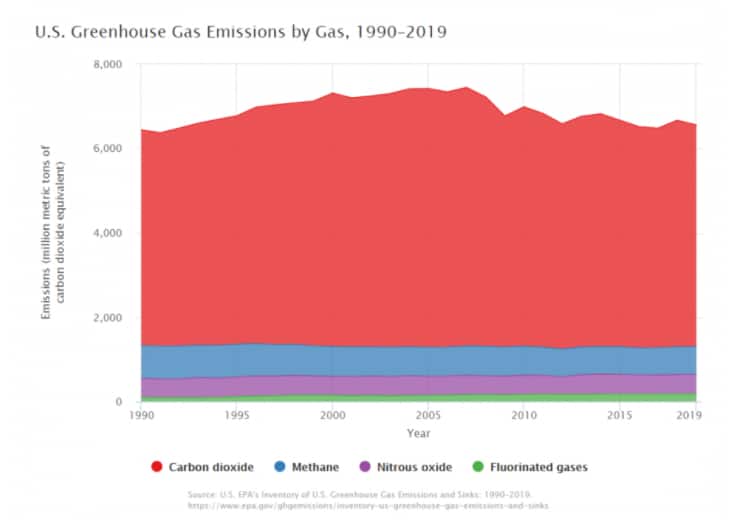 Methane's emissions, however, have a global warming impact 84 times more potent than that of CO2 over a 25-year period, which has led to a governmental focus on reducing those emissions. US methane emissions were 13.9% lower in 2019 than they were in 1990, EPA said, with the energy industry reducing its methane emissions by 25.9% during that period.

Looking at GHG emissions by economic sector, in 2019, transportation was the largest contributor at 29%, followed closely by power generation (25%) and industry (23%). Further behind were agriculture (10%), commercial buildings (7%), and residential buildings (6%). 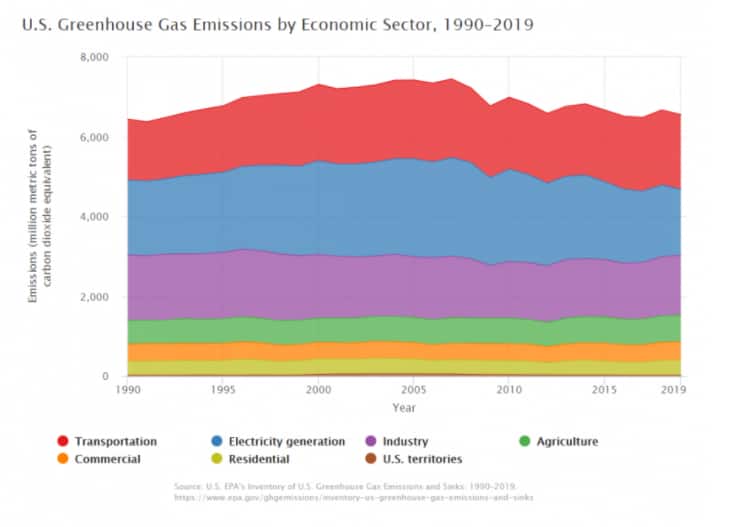 Under the United Nations Framework Convention on Climate Change (UNFCCC), national inventories are submitted to the UNFCCC Secretariat each year by 15 April.

Although EPA's data are the official numbers submitted to the UNFCCC, environmental groups say that advanced emissions monitoring technology suggests that EPA's methods of calculating emissions could be undercounting key sectors.

"Direct scientific measurements suggest that actual oil and gas methane pollution is twice the new EPA GHG inventory estimate," Lauren Pagel, Earthworks policy director, said after the GHG inventory was released. "Knowing about the undercount, President Biden should include concrete methane targets in the Nationally Determined Contribution (NDC), which sets the national climate reduction goal, and use the full power of the Clean Air Act to reduce oil and gas methane emissions 65% by 2025."

The NDC is the US' commitment to reducing GHG emissions by 2030, as part of its participation in the Paris Climate Treaty. Biden has been encouraged by environmental groups and more than 300 businesses to propose a 50% GHG reduction from the 2005 baseline as the new US NDC in time for the next global climate meeting in November in Glasgow, Scotland. The current US figure, set by President Obama in 2016, is a goal of 26-28% GHG reductions by 2030.