The Biden administration opened the door to greater certainty for US offshore wind developers and the sector's nascent supply chain 13 October while also bolstering the prospects for its own ambitions in the burgeoning generation segment.

Speaking at an American Clean Power Association conference, Secretary of the Interior Deb Haaland promised to hold as many as seven lease sales before 2025 in the Gulf of Maine, New York Bight, Central Atlantic, and Gulf of Mexico, as well as off the coasts of the Carolinas, California, and Oregon.

"We are working to facilitate a pipeline of projects that will establish confidence for the offshore wind industry," added Amanda Lefton, director of the Bureau of Ocean Energy Management (BOEM). 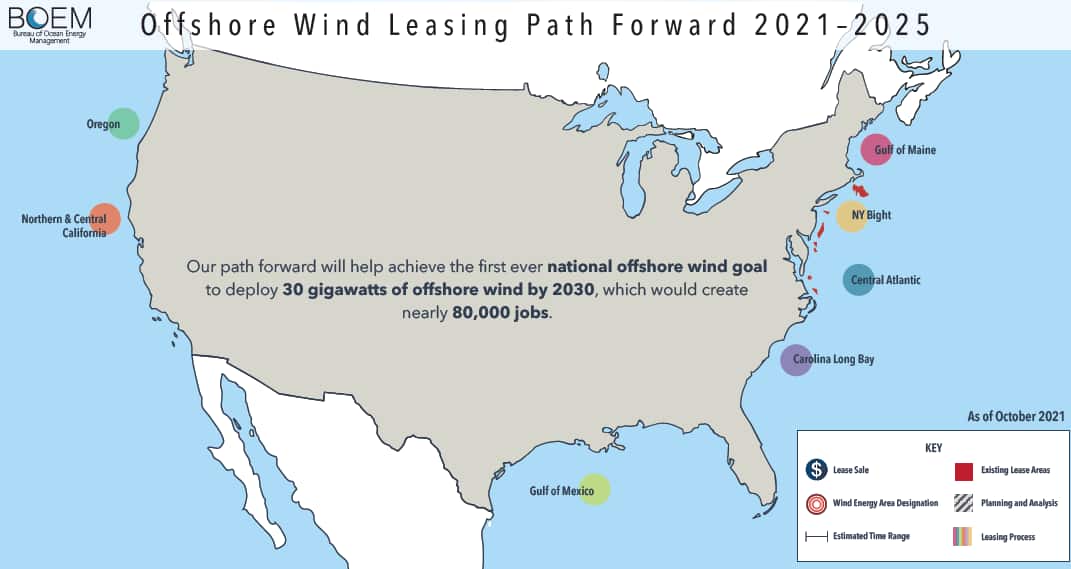 The opening up of such areas to offshore wind development is one of the major advances required to achieve plans announced 29 March to build 30 GW of offshore wind capacity by 2030, equivalent to a 1,000-fold expansion of the current commercial capacity of 30 MW.

IHS Markit Principal Research Analyst Andrei Utkin told Net-Zero Business Daily the new lease areas and later solicitations will be vital to achieving the 30-GW target and the development of the industry in the US beyond this timeframe.

"To invest billions of dollars in the supply chain and associated infrastructure, the industry must be confident in the future and willing to see a solid pipeline of projects at various stages of development. And there is nothing that boosts confidence better than new allocation rounds," he added.

A rapid expansion of offshore wind capacity will also be required if the Biden administration's hopes for an emissions-free power generation sector by 2035 are to be realized. The White House's offshore wind ambitions don't end at 30 GW though. It is targeting 110 GW of capacity by 2050.

As a result, BOEM is considering "innovative lease stipulations" consistent with the Outer Continental Shelf Lands Act, such as lessee reporting requirements on efforts to minimize conflicts with other ocean users; mechanisms for project labor agreements; and investments in the US domestic supply chain, it said 13 October.

Such stipulations were included in the New York Bight Proposed Sale Notice announced in June. That lease is one of at least three, and possibly four, lease sales scheduled for 2022. BOEM will also hold Carolina Long Bay and Northern and Central California lease sales next year. By 2025, Central Atlantic, Oregon, and Gulf of Maine auctions will have been held, Haaland said 13 October.

BOEM completed its review of a Construction and Operations Plan (COP) for the Vineyard Wind project in Massachusetts waters earlier this year, and is currently reviewing nine additional COPs. It plans to complete the review of at least another six by 2025, the Department of the Interior said 13 October. (BOEM is part of the Department of the Interior.)

The announcement at the Boston conference illustrates the steady commitment the Biden administration is showing to the offshore wind industry, John Ugai of law firm Farella Braun + Martel told Net-Zero Business Daily 14 October, a consistency he said is energizing the sector.

That excitement, however, must be tempered by a measured and inclusive approach, according to Hallie Templeton, Friends of the Earth legal director. "We urge the administration to proceed with utmost caution in placing these new facilities by relying on sound science, community stakeholder input, and thorough environmental reviews, consultations, and assessments," she told Net-Zero Business Daily.

Battles with stakeholders may be more difficult to navigate for offshore wind than environmental issues, said San Francisco-based Ugai, who specializes in environmental and permitting issues. Previously, California overcame long-standing Department of Defense objections to start the ball rolling on offshore wind leasing there in May. Meantime, California Governor Gavin Newsome signed AB 525 on 23 September to aid offshore wind development.

To the north, Oregon is unlikely to face any specific environmental issues beyond those other lease areas are already tackling, he said, adding that the toughest challenge for developers eyeing that lease area will be infrastructure issues, including the supply chain.

However, Liz Burdock, CEO of the Business Network for Offshore Wind, a nonprofit focused on growing the offshore wind industry and its supply chain, said the announcement "sent a clear signal to the offshore wind market today that will spur needed investment in our domestic supply chain. Laying out clear, long-term development timelines, with specific locations, is exactly the kind of action that significantly strengthens investor confidence in the US offshore wind industry and attracts larger manufacturing facilities to our shores and harbors.

Erik Milito, president of the National Ocean Industries Association, which serves the wind, oil, and natural gas industry, echoed that stance. "A successful American offshore wind future needs clarity around the leasing schedule and Interior's outline of potential wind lease sales through 2025 helps provide that," he said in a 13 October statement.

"Providing a reliable and predictable road map of offshore wind opportunities will help boost critical investments into the supply chain, ports, and workers," he added.

Some environmentalists also backed the roadmap. Environment America Research and Policy Center Federal Clean Energy Associate Hannah Reid said in a 13 October statement: "By developing offshore wind across the country, we can take bold steps toward repowering our nation with renewable energy. Expanding offshore wind means cleaner air to breathe and would take us closer to ensuring a liveable climate."

Still, bottlenecks in the permitting and supply chain market and a crucial lack of infrastructure mean the 30 GW by 2030 target will almost certainly be missed, despite the surge in activity in the industry this year, July research by IHS Markit's Clean Energy Technology Service showed.

American Clean Power Association Federal Affairs Director Claire Richer told an August conference that if she had a magic wand that could alter one thing in the offshore wind arena, it would be a speeding up of the understanding of permitting at BOEM and the National Oceanic and Atmospheric Administration.

Several of the largest turbine manufacturers and installers are already saying global supply chain difficulties are interfering with the wind industry's ability to reach its potential.

Vestas, which has topped the annual installation volumes table for the past five years, showed slower-than-expected growth in the first half of 2020, due to "supply chain constraints in key markets," CEO Henrik Andersen said on 9 August.

GE Renewable Energy, second in the 2020 global rankings, reported a steep drop in orders for wind turbines for new projects in the April-June quarter, falling to 398 units in 2021 from 645 units in the same period in 2020.

As a result of these and other difficulties, GE Renewable Energy teamed up with US automaker General Motors earlier in October to evaluate the opportunities to improve supplies of heavy and light rare earth materials and magnets, as well as copper and electrical steel used for manufacturing of electric vehicles and renewable energy equipment.

The initial focus of the collaboration will be on creating a North America- and Europe-based supply chain of vertically integrated magnet manufacturing that both companies will use in the future, they said. The direct drive turbines typically used for offshore wind installations tend to use rare earth-based permanent magnets.

The two US companies will also work together to help establish supply chains for additional materials, such as copper and eSteel that are used in automotive traction motors and renewable power generation.

Another bottleneck could be the vessels required to service all these new leases areas, but Ugai said 14 October the certainty provided by Haaland's roadmap may incentivize construction of Jones Act-compliant vessels. Offshore wind industry observers have long worried about a scarcity of vessels that comply with the Jones Act—which requires goods shipped between US ports to be transported on ships that are built, owned, and operated by US citizens or permanent residents.

At present, there are no Jones Act-compliant wind turbine installation vessels (WTIVs) operating. WTIVs are the biggest vessels the sector uses to put steel in the ground—and the scarcest.

Dominion Energy is furthest along toward ending that problem with the Charybdis, currently under construction in Brownsville, Texas. The vessel is expected to enter service in 2023.

In May, New York-listed Eneti said it plans to commission a Jones Act-compliant WTIV. Eneti, formerly known as Scorpio Bulkers, became the third prospective owner of a US-flagged WTIV to make its plans public, although sources say talks are progressing for as many as five such vessels.

Work is advancing elsewhere in the supply chain too. Ørsted on 6 October said it would build an offshore wind operations and maintenance facility in Ocean City, Maryland. The $20 million facility will service Ørsted's Skipjack Wind facility. Skipjack Wind 1 is a 120-MW project under development in Maryland waters. In July, Ørsted submitted a bid to build a 760-MW expansion of the project, Skipjack 2.

Meantime, Ørsted and Eversource, the 880-MW Sunrise Wind project's developers, on 11 October signed a $86-million supply chain contract with Riggs Distler to construct advanced foundation components for wind turbines at the Port of Coeymans in New York. The state hopes to develop at least 9 GW of offshore wind by 2035.