The US Department of Energy Loan Program Office (LPO) wants more energy storage industry entrepreneurs and developers to knock on its door seeking money, its top official told executives, even while the sector already has the deepest pool of applicants seeking its support.

"We're taking a lot of risks. We're open to any business models," said Shah. The LPO, an agency of the US government, closed its first loan guarantee to a clean energy project since 2014 earlier in June with $504.4 million in backing for a hydrogen storage project in Utah.

Long duration energy storage, including hydrogen, will play a critical role in meeting President Joe Biden's goals to achieve a clean grid by 2035 and reach net-zero emissions economy wide by 2050, DOE said when announcing the guarantee on 9 June.

The guarantee went to the Advanced Clean Energy Storage (ACES) facility in Delta, Utah, which will combine 220 MW of alkaline electrolysis with two 4.5-million barrel salt caverns to store green hydrogen. The hydrogen will then be deployed as fuel for Intermountain Power Agency's (IPA) IPP Renewed Project.

IPA's Intermountain Power Project (the IPP being renewed) is a coal-fired power plant its owners—23 municipalities in Utah—are initially turning into a natural gas and hydrogen-fired facility, with the ultimate aim of using just hydrogen for fuel by 2045 or earlier.

At the 22 June event, Shah compared the Utah hydrogen project to pumped storage hydro, also a sector with growth opportunities in the US. Considering how desperate the Western US is for storage capacity, he said, then the ACES project and similar facilities were "super valuable" to Utah and its neighbors, especially California. Such hydrogen projects are not dissimilar to the storage caverns for gas that currently powers and heats much of America in the winter, he added.

In addition, massive amounts of wind and solar capacity won't get built without the offtaker being onsite green hydrogen, Shah, the former head of solar company SunEdison said.

With the ACES guarantee on the books, the LPO had 76 other active applications (see breakdown by technology sector below in graphic) at the end of May asking for combined loans in excess of $78 billion, the agency's latest monthly update shows. 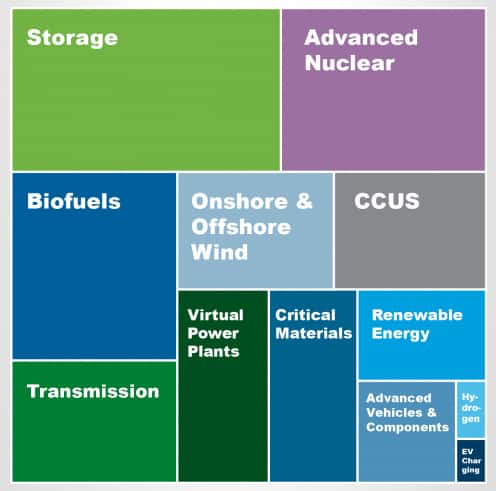 The LPO has $17.7 billion in direct loan authority to support US manufacturing of fuel-efficient, advanced technology vehicles and qualifying components and $10.9 billion in loan guarantee authority for nuclear projects.

However, the fossil and nuclear funds can also find their way to "energy storage technologies for residential, industrial, transportation, and power generation applications," the LPO noted in an April blog.

No matter how energy storage capacity is built though, the US is going have trouble getting to 90% clean energy, Shah said, warning that advocates and planners must be realistic. "I don't know the answer" on how to fix that conundrum, he said.

Shah said he did know, however, that collaboration was required and no answers should be vilified. That includes accepting that oil and natural gas cannot just be erased from the energy picture.

Much as there is a need for greater interconnection, reaching the Biden administration's climate targets isn't just a matter of fixing the transmission grid, he said.

"Its about [the clean energy sector] growing up and taking responsibility for [its] actions," said Shah, and doing so by figuring out the big picture, connecting the dots, and accepting that nothing is off the table. The renewables sector can't just see itself as an upstart disruptor and avoid working within the existing system, and dealing with the consequences of its actions and rise, he said. Honest conversations must be held, he said.

Shah said it was obvious communities with coal plants don't want storage and solar, they want a nuclear plant more, or some form of facility that offers more full-time jobs and taxes for the local authorities. The diverse cast of actors in the wider energy industry need to work together to figure out how to bring all Americans along for the energy transition ride, he said.

And all that comes against a backdrop of commodities markets betting against clean energy, he said, adding that if traders thought renewable energy developers would succeed then prices would reflect that. But, he said, commodity traders don't understand what their investment banking colleagues know—that the energy transition will succeed.

Even as that planning gets underway and the LPO receives more applications, the US energy storage market set a new record in Q1, with grid-scale installations totaling 2,399 megawatt hours (MWh), the highest capacity for Q1 on record, and four times that of a year earlier, ACP data show.

But driven by that need to balance intermittent renewable energy, US energy storage installations will grow by more than eight times their level at the end of 2020, a National Renewable Energy Laboratory (NREL) report concluded.

NREL's reference forecast is that more than 200 GW of storage will be installed in the US by 2050. In terms of gigawatt hours (GWh), total US capacity in 2020 was about 300 GWh and will be about 1,200 GWh in 2050, said NREL, or even greater if the cost curve improves more rapidly than expected.

Costs for lithium-ion batteries have been falling sharply for a decade, helping to boost interest in the technology, said NREL. Lithium-ion battery pack prices dropped by 80% from 2010 through 2020, and NREL has modeled them falling 18% per year through 2030. This would move the price from $132/kWh in late 2021 to about $50/kWh by the end of the decade.

S&P Global Commodity Insights said in a February report that prices for lithium-ion batteries globally were about $110/kWh in the second half of 2021. Reflecting this trend, S&P Global found that in 2021, 57% of new battery installations were co-located with solar, compared with 8% in 2020. It forecasts that over 50% of new US battery systems will be paired with solar through 2025, given current incentives in the federal investment tax credit.

Since the end of 2021 though, battery storage costs have risen and are expected to continue to do so, according to an April S&P Global report. Battery costs are set to increase globally by 22% in 2022 compared with January expectations and 31% in 2023. Battery manufacturers are passing on raw material price volatility, which disproportionally burdens the stationary storage market, the S&P Global analysts said.