US energy-related CO2 emissions remained below pre-pandemic levels in 2021: EIA

An increase in travel along with a surge in demand for electric power drove US energy-related CO2 emissions to 4.9 billion metric tons (mt) in 2021, though the total remains 5% below pre-pandemic levels, according to recent US Energy Information Administration (EIA) data.

The EIA attributed the increase in CO2 emissions in 2021 to "the rise in economic activity and energy consumption once the initial economic impacts of the COVID-19 pandemic began to subside."

Although EIA noted that US energy-related CO2 emissions were 6% lower in 2020 at 4.6 billion mt, it said that was the result of COVID-induced lockdowns.

The EIA highlighted the CO2 emissions increase in a 13 May note though it had released the estimates as part of its Monthly Energy Review that came out on 26 April. 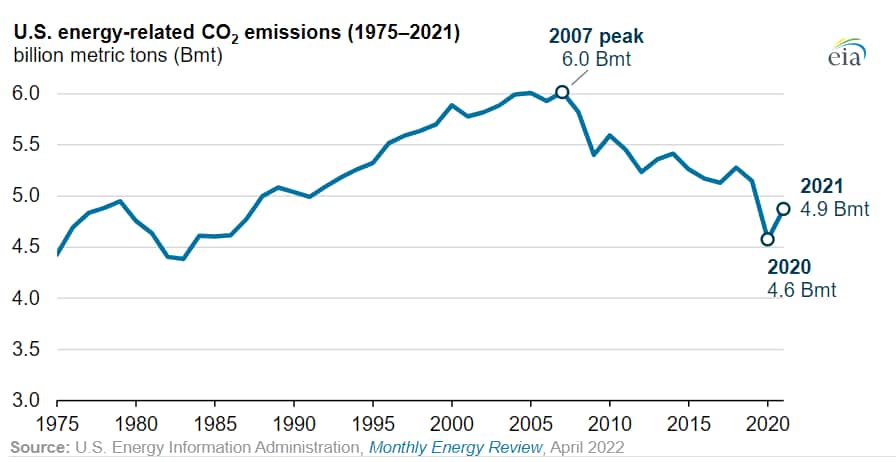 The US remains the second-largest global emitter of GHG emissions, with CO2 taking up the lion's share from transportation and power generation.

The EIA said the transportation and power generation sectors were mainly responsible for the emissions hike in 2021.

More petroleum products were consumed in 2021 when people resumed their traveling either by air or by road with the easing of COVID-related restrictions. As a result, jet fuel emissions increased 27%, motor gasoline emissions increased 9%, and emissions from distillate fuel oil (which is primarily consumed as diesel) increased 6%.

The scale of the demand increase for oil towards the end of 2021 caught most oil companies unaware, as US Secretary of the Treasury Janet Yellen recently observed.

As the US economy began revving up its engine, EIA said emissions from coal-fired generation reported an increase to 1.12 billion mt from the low of 900 million mt seen in 2020.

This reversed the year-on-year declines EIA has been recording in coal-fired power emissions since 2014 and contrasts with the US pledge to move away from coal-fired generation as part of net-zero carbon goals.

Stable coal prices and significantly higher natural gas prices contributed to greater use of the former in power plants, and consequently an increase in emissions, it added.

In a 31 December 2021 note, the EIA reported that the year-to-date delivered cost of natural gas to US power plants averaged $4.93/MMBtu, more than double the previous year's price.

In contrast, S&P Global Commodity Insights reported high sulfur, bituminous coal prices averaging $63.63 per short ton in 2021. This converts to a cost of about $3.20/MMBtu, based on the coal's heat content.

In 2022 though, the EIA does not expect coal-fired generation in the US to return to 2021 levels of providing 23% of total power generation. Rather, it projects that renewables, driven mostly by wind and solar installations, will be responsible for 22% of power generation, while coal will slip a tad to about 22%.

China and India, which are two of the top GHG emitters in the world, have introduced policies to boost coal-fired generation despite warnings from scientists about its contribution to climate change.

In late April, the IEA announced it was convening a group of energy, finance, and climate leaders to brainstorm approaches for phasing out coal-fired emissions globally. The report is scheduled for release in the fourth quarter of this year.