Legal battles over how deeply US government agencies can regulate GHG emissions continue, with environmental groups winning the latest skirmish when the US District Court for the District of Columbia on 27 January invalidated an 80.8-million acres oil and natural gas lease auction held in November. The 17 November auction resulted in bids of $192 million for 1.7 million acres, though the leases had not yet been awarded.

The auction was held reluctantly by the Biden administration, after a lower court ruled in favor of the State of Louisiana and the American Petroleum Institute (API) that the president had illegally imposed a moratorium on all leasing for oil and gas on federal lands. The moratorium was a signature campaign promise of Biden that he implemented through an executive order in his first week in office.

The Bureau of Ocean Energy Management (BOEM), which held the auction, estimates that the leased acreage could yield 1.2 billion barrels of oil and 4.4 trillion cubic feet of natural gas over a 50-year period.

In the ruling, Friends of the Earth, et. al, v. Haaland, et al., Judge Rudolph Contreras said the auction did not meet the standards of environmental review under the National Energy Policy Act (NEPA). Key to his ruling, and repeated numerous times in the 68-page opinion, are references to a prior federal court ruling that NEPA forces federal agencies to take a "hard look" at the environmental consequences of their actions and "ensures that these environmental consequences, and the agency's consideration of them, are disclosed to the public."

BOEM had argued in approving the leasing acreage during the Trump administration that it does not need to consider cumulative emissions impacts until the leases are awarded, not when they are auctioned. For this reason, it did not prepare a supplemental environmental impact statement (EIS). This argument was taken up by Louisiana and API. But that argument was rejected by the court in sending the leasing plan back to BOEM for a supplemental EIS.

"The court believes that … error was indeed a serious failing," the decision stated.

After the district court's ruling was announced, the Department of Interior, which oversees BOEM, released an I-told-you-so statement.

"We were compelled to proceed with Lease Sale 257 based on the previous administration's environmental analysis and its decision to approve the lease sale. We are reviewing the court's decision concerning deficiencies in that record," said Department of Interior spokesperson Melissa Schwartz. "We have documented serious deficiencies in the federal oil and gas program. Especially in the face of the climate crisis, we need to take the time to make significant and long overdue programmatic reforms. Our work will be guided by the law, science, and sound policy."

Oil and gas groups expressed concerns about the effects on the industry, markets, and consumers.

"At a time of geopolitical uncertainty and rapidly rising energy prices, US oil and gas production is more important than ever to curb inflation and to fortify our national security," said Eric Milito, president of the National Ocean Industries Association, in a statement. "Uncertainty around the future of the US federal offshore leasing program may only strengthen the geopolitical influence of higher emitting—and adversarial—nations, such as Russia."

The industry will closely monitor future decisions by BOEM, Milito said. "It will be incumbent on the [Biden administration] to defend responsible US offshore production and to take the necessary steps, including the development of a new US offshore oil and gas leasing program, to ensure continued leasing and energy production from the US Gulf of Mexico, for the benefit of all Americans," he said.

Environmental groups said the ruling sets a key precedent and they will keep watch just as closely to ensure that cumulative climate impacts are properly considered. "The federal government can no longer rubber-stamp the status quo on fossil fuels," said Lena Moffitt, chief of staff of Evergreen Action. "The decision today makes it clear that climate change must also be central to their decision-making on public lands leasing."

"The court decision holds Interior accountable for grossly underestimating the climate impacts and risks to Gulf communities before deciding to hold the largest oil and gas lease sale in US history," said the Center for Biological Diversity, which is one of the plaintiffs who challenged the Trump administration's lease sale.

Over the longer term, however, the ruling could be significant. US Gulf production has represented 15-18% of total US crude production each year since 2018 and about 3% of gas output, Lucian Pugliaresi, president of the Energy Policy Research Foundation, told a 20 January US House of Representatives Committee on Natural Resources hearing. In 2020, production on offshore federal lands amounted to 642 million barrels of oil and 910 million cubic feet of gas, with 90% of that coming from the Gulf.

"The Gulf of Mexico yields substantial revenues to the US Treasury, contributes to American energy security, and is a prolific and low-cost resource for sustaining the North American oil and gas production platform," he said.

Even as the US shifts away from fossil fuels, capitalizing on new finds is crucial to keeping prices stable during the energy transition, he said.

IHS Markit has warned that oil and gas producers in the US and elsewhere have underinvested in maintaining production in both 2020 and 2021, and that government decisions that make it harder to obtain leases could exacerbate the situation. "Several factors are currently making it more challenging to meet adequate investment levels this decade compared to decades past. These include record price volatility, changing government regulations, divergent long-term demand scenarios, and non-standardized ESG criteria that are driving up investment hurdles and hiking the cost of capital for long-cycle projects," IHS Markit said.

There's even an environmental argument to be made in favor of US Gulf oil production, Pugliaresi said. US deepwater oil and gas production is among the cleanest in the world, he explained, so removing it from the picture would only drive other nations to increase their production of dirtier fossil fuels. 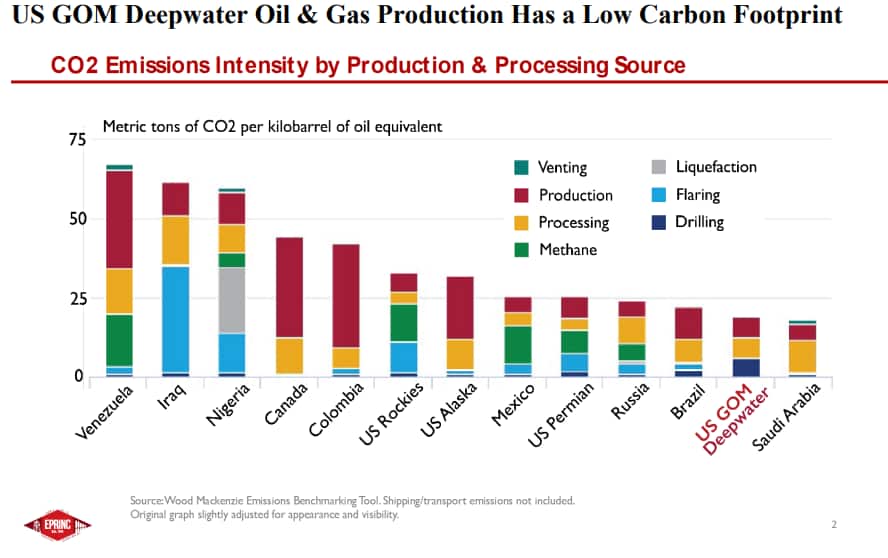 The DC court discussed that replacement-oil argument because it was contained in BOEM's analysis, and it found the agency's work flawed. Specifically, the court said BOEM recognized that if US oil production was lower, it would raise prices for foreign oil exported to the US, and thus reduce oil consumption in other countries. But the agency declined to calculate the emissions impact of lower consumption in other countries.

At that same US House hearing, environmental groups focused on the need to reduce US GHG emissions to explain why they object to Lease Sale 257 and any future new offshore leasing by BOEM. They said that Biden's pledge that US GHG emissions will be reduced by 50-52% by 2030 from 2005 levels and to net zero by 2050 cannot be met if oil and gas production continues at or near its current pace.

Using the US Environmental Protection Agency's Greenhouse Gas Equivalency guidelines, the combustion of the oil and gas produced over 50 years would add 0.76 gigaton of CO2, said Kristina Dahl, senior climate scientist for the Union of Concerned Scientists. In 2019, US fossil fuel emissions totaled 4.7 gigatons of CO2, so the cumulative increase from the new Gulf leases would be 16% of a single year's emissions.

"While the potential emissions from these Gulf of Mexico lease sales may seem limited, viewing them in isolation fundamentally mischaracterizes the cumulative and collective action challenge of climate change. It will take joint efforts by all nations to address the scale of the climate challenge—each contributing their fair share, cutting emissions across every sector of their economies, so that together we can meet science-based emission reduction goals," she said.

That's exactly the point made in the federal court decision about the need to take into account cumulative emissions in a supplemental EIS.

Democrats on the House Natural Resources Committee stated on 27 January that they support the court's ruling. "These leases were a climate disaster waiting to happen. Judge Contreras is correct in finding that the law requires careful analysis of all future greenhouse gas emissions that would result from this harmful sale. This decision is a welcome chance to reset our federal fossil fuel leasing policies and limit carbon emissions while there is still time to prevent the most disastrous outcomes of climate change," said Chair Raul Grijalva, Arizona, and subcommittee chairs Alan Lowenthal, California, and Jared Huffman, California, in a statement.

With the strength of the ruling behind them, environmental groups want BOEM to include no offshore leases in its next five-year plan. The current plan covers the fiscal years 2017-2022, and it expires on 30 June 2022.

Republicans have argued that there's another way to look at climate mitigation and oil production—that smart use of oil and gas revenues can actually improve environmental outcomes. "Cutting offshore energy production directly reduces hurricane protection and coastal restoration funds," said Louisiana Representative Garret Graves, citing Louisiana's experience with Hurricane Ida in August and September 2021. Under federal leasing rules, nearly half of the revenue from the now-voided leases would have been returned to the states adjoining the offshore areas, and Louisiana would have been able to use the funds to improve its climate protections, Graves said.

In another ironic twist environmentally, ExxonMobil was the high bidder for 94 leases for shallow offshore tracts in Lease Sale 257. Many caverns in those tracts had been previously developed, and they are considered to have little oil production potential remaining. Thus, it's widely believed the company intended to use them to store captured carbon. ExxonMobil last year proposed a $100-billion carbon capture and storage (CCS) hub in the Houston area, and the idea is taking root in the industry. In January, Air Liquide, BASF, and Shell announced they were joining the partnership to develop the hub.

ExxonMobil did not respond to a request for comment on whether the possible loss of its leases in the Gulf would affect its CCS storage hub plan.