Utilities in the US are poised to leapfrog each other in the race to have the largest installation in the country and the world, as a California facility was expanded this month, but a Florida utility will soon finish an even bigger project.

These developments support an assessment of the industry's near-term potential issued by the US Energy Information Administration (EIA) in August. EIA said project developers are on track to install at least 10 GW of large-scale battery storage capacity in the US during the years 2021 through 2023, which would be about 10 times the storage capacity available in 2019.

On 19 August, Vistra Moss Landing Energy Storage Facility said it completed Phase II of the world's largest battery storage facility in Monterey County, California. The facility can now store 400 MW of power and provide up to 1,600 MWh of delivery capacity.

Phase I, coming in at 300 MW of capacity, was connected to the power grid in December 2020 and has been storing and delivering power since then. The next tranche of 100 MW of storage came online this month. The batteries are charged by excess wind and PV power during the daytime, and then can release that power to the grid in the evening when PV output drops.

Utility PG&E is the buyer of the power, and LG Energy Solution provided the battery racks.

"With the disruptions that we're seeing to our energy grid from wildfires to other extreme weather events, of course caused by climate change, we need these types of low-emission grids that are resilient and yes, that are very, very green," California Representative Jimmy Panetta said at the ribbon cutting.

Ultimately, Vistra says it can reach 1,500 MW/6,000 MWh of storage at the site. And at that point, it could again recapture the title of largest facility in the world.

But temporarily at least, it will have to cede its position to Florida Power and Light's (FP&L) Manatee Energy Storage Center in Manatee County, Florida. FP&L said on 20 August that the facility is 75% complete, with 100 of its 132 battery units installed and all 132 inverters in place. (Inverters convert DC electricity from batteries to AC electricity.)

The Manatee site is expected to be completed and hooked up to the grid by the end of 2021, FP&L said in a statement. At completion, the facility will have capacity of 409 MW and a delivery capacity of 900 MWh.

IHS Markit tracks battery projects globally, and the other largest projects currently in operation are a 202.8-MW facility in Qinghai, China; a 111-MW facility in Jiangsu, China; and a 100-MW facility in Tullamore, Ireland. Projects at 1,000 MW or larger have been proposed for Qinghai, as well as Queensland, Australia, and Oregon in the US, said Tiffany Wang, research analyst at IHS.

The lesson of the Moss Landing facility, though not Manatee, is that augmentation of storage at existing sites is the way the storage industry is evolving, said Jason Burwen, acting CEO of the Energy Storage Association (ESA). Augmentation is adding more than a marginal amount of new capacity at existing storage locations.

On 23 August, ESA announced that its members have approved a merger with the American Clean Power Association, which will likely become effective on 1 January 2022.

"Augmentation is going to become a very regular part of these battery storage facilities," Burwen said. "Costs [of storage] are continuing to decline. As long as you have the footprint and interconnection, there's no reason you can't keep expanding service over time."

Burwen observed that augmentation at a modest level already is common in the industry because battery systems degrade over time, and some operators counteract this by replacing aging units with the same-sized or slightly larger-sized systems. But the type of augmentation at Moss Landing is of a different degree, as it added 100 MW to an existing site.

"A lot of folks have not really thought about it, but you can augment fairly expeditiously," Burwen said. "You have all the footprint you need [for placing the battery units]. You just need interconnect service—upgrading the transmission line and adding inverters to manage the power."

The other augmentation trend that Burwen sees involves increasing the duration of power, rather than output for a moment in time. In other words, new storage can lengthen the number of hours that power can be sent back to the grid.

These expansions come from the modular nature of battery storage industry, which enables quickly adding components where opportunity and need arise. "The ability to build [along modular lines] doesn't have a whole lot of precedent in the power sector," Burwen said.

This gives operators tremendous flexibility, which will help to drive further growth. For example, a utility that's considering a storage option does not have to decide between four-hour and six-hour storage, Burwen explained. Thanks to modularity, "you can have a four-hour battery today, and it can be an eight-hour battery at the same site thanks to augmentation."

EIA's study also identified a feature of the new facilities that is going to become increasingly common: co-location with generation, including renewable power. Currently, about 38% of US battery storage is co-located with generation, of which 8% is natural gas-fired and 30% wind and solar.

In the next few years, this will shift dramatically. "If all the currently announced projects from 2021 to 2023 become operational, then the share of US battery storage that is co-located with [renewables] generation would increase from 30% to 60%," EIA said.

To put it another way, EIA said that nearly 25% of all the planned solar PV capacity for years 2021-2023 will include co-located storage, compared with less than 2% of existing solar PV capacity as of December 2020. 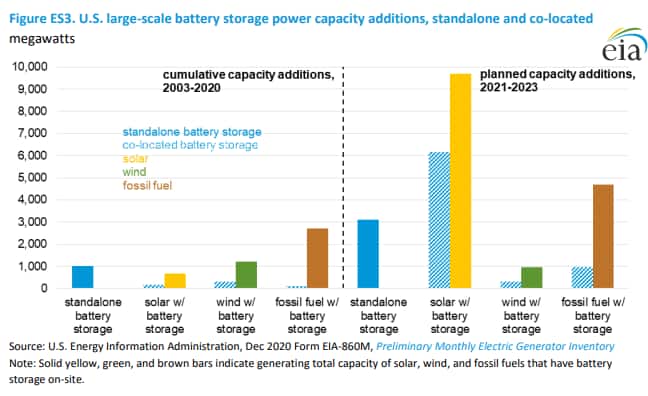 Burwen said several factors are driving the growth in battery storage. The first is cost. "As cost comes down … you are finding developers who are bringing on projects of larger and larger sizes," he said.

Size has a complementary benefit, which is that as capacity grows, stored power can become more important to energy reliability. "You now have assets that can play the roles that power plants have traditionally played through generation," he said. "And there's no reason that [developers] can't build even larger [facilities]. It's just a matter of making sure that your cost points are hit well and that the intended application is sized appropriately."

Furthermore, the small size and modular design means that battery installations can be online in a matter of months, not the years it takes to bring on new power generation, he said.

The modular design also saves money for battery developers, as they do not have to invest large amounts of capital years before power is needed, Burwen pointed out.

To continue the momentum or even increase the pace of battery storage installations, Burwen said obtaining a federal storage investment tax credit is at the "top of mind for us." He added that the availability of such credits for wind and solar installations has been proven to encourage new investment by improving cost competitiveness, and he sees the same opportunity for batteries, both in the number of installations and their size.

The other issue is one of planning, Burwen said. "In states that have decarbonization goals or utilities that have made net-zero pledges, they need to realize that investments being made today are 20- or 30-year investments," he said. "It raises the question in a state that has to be carbon free in a couple of decades, what if my utility is coming in with a [proposal for a new] gas-fired power plant? Should we be doing that? Why not a portfolio of storage and clean energy resources?"

Utility regulators in those states should demand the utility explain why clean energy assets won't work, he said, rather than the typical practice today of accepting the gas-fired unit if the demand projections look reasonable.

The planning mindset also needs to recognize that battery technology will continue to improve, Burwen said. "A lot of utilities are doing larger [renewable energy] procurements, but it's one of these things that if your planning process is looking back even 18 months or two years old, you going to be missing how fast storage is moving," he said.