US 2020 climate, health benefits more than twice the cost of wind energy: DOE

The health and climate benefits of wind generation installed in the US in 2020 were more than twice the levelized cost of energy (LCOE) of the facilities, according to data released by the US Department of Energy (DOE) 30 August.

DOE valued the health and climate benefits of wind energy installed in the US in 2020 at $76/MWh, while the nationwide LCOE—or the lifetime cost divided by production—for wind was $33/MWh, it said in a report on onshore wind energy, one of three on wind the agency issued concurrently.

Such disparity between the cost and benefits supports the Biden administration's plans to ramp up US renewable power generation capacity and cut the country's emissions by 50-52% compared with 2005 levels by 2030 as part of efforts to limit global warming to 1.5 degrees Celsius compared with pre-industrial levels.

The reports "show that the clean energy future is well underway in America. Strong demand and technological improvements have made wind and solar the most affordable sources of new electricity in the US," American Clean Power Association CEO Heather Zichal told Net-Zero Business Daily.

In Land-Based Wind Market Report: 2021 Edition, analysts at the Lawrence Berkeley National Laboratory evaluated the benefits by extrapolating the positive climate impact by multiplying the amount of avoided CO2 emissions by the social cost of carbon.

Health benefits were calculated by estimating the cost of avoided nitrogen oxide and sulfur dioxide emissions, including cost of premature mortality, increased hospitalization, and workdays missed, the report said.

The average US LCOE for wind was consistent with the previous two years—even as the COVID-19 pandemic raged and raw material and labor costs rose. BP Chief Economist Spencer Dale said in the oil giant's 70th Statistical Review of World Energy that the global cost of onshore energy had fallen by around 40% over the past five years, more than double the pace the company expected.

Over the last decade, wind represented 29% of total US capacity additions, and an even larger fraction of new generation capacity in the Southwest Power Pool (75%), Electric Reliability Council of Texas (54%), and Midcontinent Independent System Operator (52%) regional transmission operator footprints that span the middle of the US, according to the report. 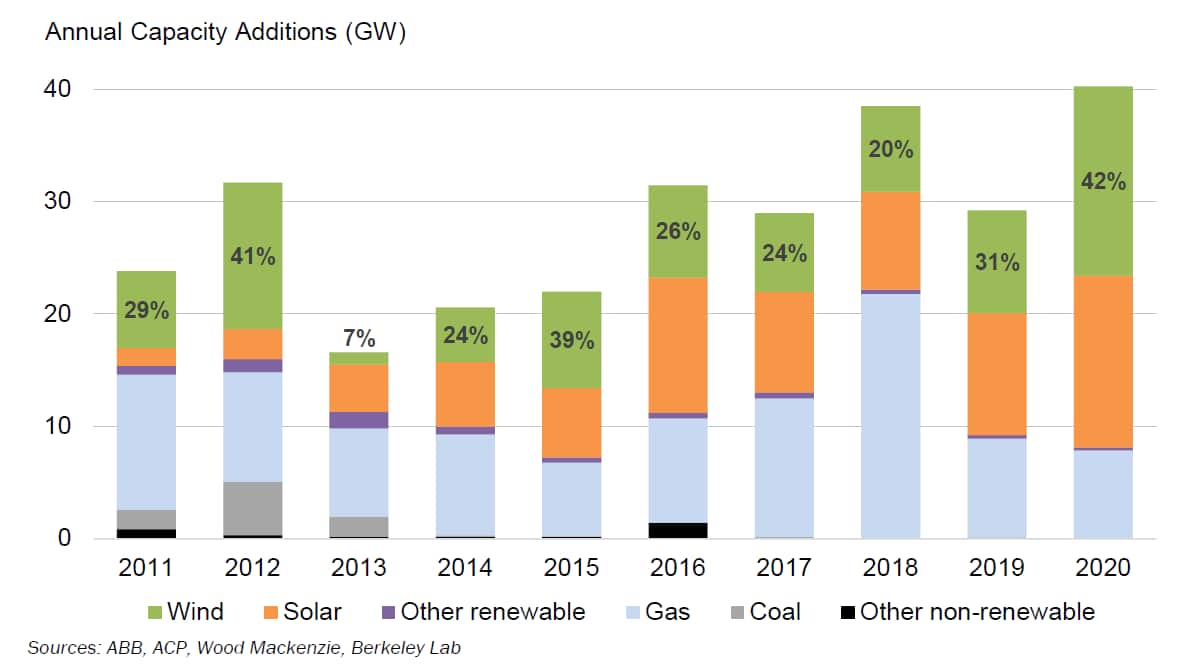 Wind installations formed the largest percentage of US generation newbuild, outpacing solar power capacity additions for the first time in several years in 2020, and represented $24.6 billion of investment, DOE said. Since the beginning of the 1980s, a cumulative $240 billion has been spent on building utility-scale wind farms, it added.

Wind provides more than 10% of electricity in 16 US states, and over 30% in Iowa (57%), Kansas, Oklahoma, South Dakota, and North Dakota. Utility-scale land-based wind turbines were installed in 25 states in 2020. Texas installed the most capacity with 4.14 GW, DOE said.

The US Energy Information Administration, part of DOE, in January said it expects about 12.2 GW of US wind capacity to come online in 2021. More recent forecasts for domestic wind installations in 2021 range from 13 GW to 16 GW, DOE said in the 30 August report. 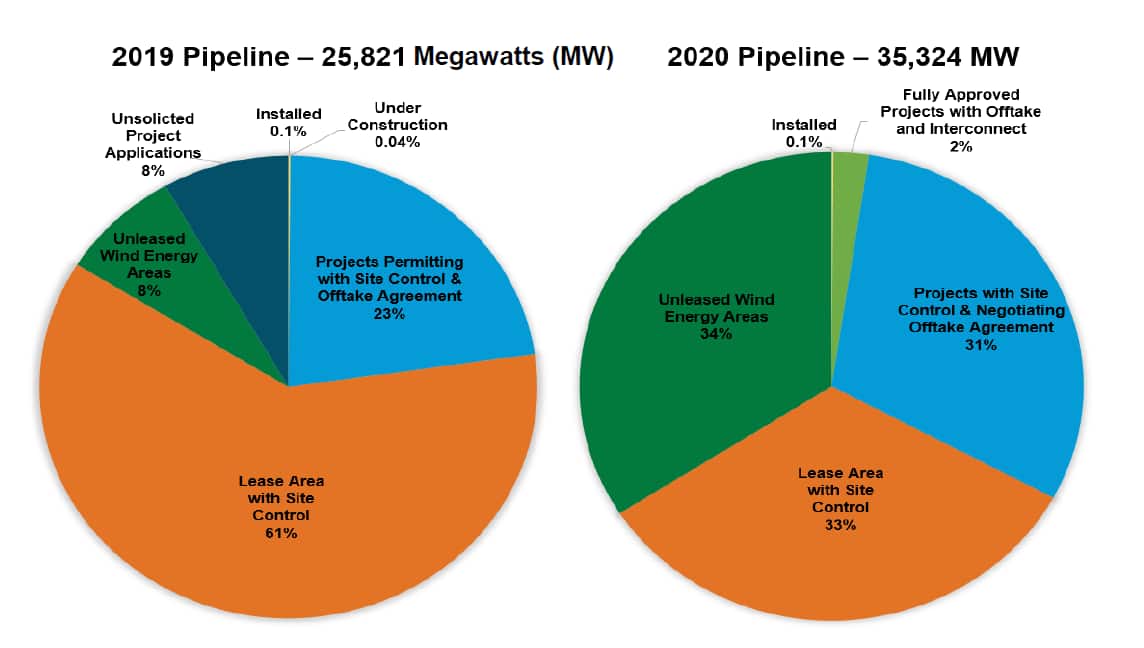 As a means of meeting much of its own and the states' goals, the federal government plans a dramatic increase in offshore wind lease sales in 2022. The Bureau of Ocean Energy Management (BOEM) could hold as many as three offshore wind lease sales in 2022, the agency's director, Amanda Lefton, told the Business Network for Offshore Wind's 2021 International Partnering Forum (IPF) 26 August, and more could be on the agency's to-do list.

And on 30 August, the Department of the Interior said BOEM plans to conduct an environmental review of an up to 1.3-GW offshore wind project in New York waters proposed by Sunrise Wind, a joint venture between Orsted North America and Eversource Investment. The project is intended to help New York State meet a 70% of electricity from renewable sources by 2030 goal.

But more help is needed, according to analysts and lawmakers. In a study released at the end of July, the Bipartisan Policy Center called for stronger governance and improved interagency coordination as well as increased federal support for offshore wind development.

Among the support measures needed, the think tank said, are DOE organizing multi-level task forces to improve federal, regional, and state collaboration; clarification of which federal agency has the lead on transmission planning; the creation of a new Offshore Wind Power Administration; increased support for building out port infrastructure; and larger federal appropriations and tax incentives.

Senator Mark Warner, Democrat-Virginia, told the IPF conference 26 August there were options for expediting the permitting process. He said the US could learn from other countries, such as naming a facility a project of national importance. "We need to bring that kind of expedited process to offshore wind," he said, adding: "We have no time to lose."

Any offshore wind acceleration will add to cost reduction momentum. Globally, the average LCOE of fixed-bottom offshore wind installations is now below $95/MWh, according to DOE's offshore wind report. This LCOE for projects that began commercial operations in 2020 represents a year-on-year reduction of 16%, it said.