The United Nations-backed Net-Zero Asset Owner Alliance called for the rapid imposition of a binding global carbon price with a minimum price and a ceiling. The 43 institutional investors in the alliance manage $6.6 trillion in assets.

Citing a study in 2018 for the Organisation for Economic Co-operation and Development (OECD), the alliance said a carbon price of $147/mt is required by 2030 to reach net-zero emissions by 2050. That compares to the current price of about €59/mt ($69.56/mt) in the EU's Emissions Trading System, the largest in the world today. Prices have been rising steadily since fall 2020, from under €24/mt at the start of November.

The alliance's members have each committed to transitioning their investment portfolios to net-zero GHG emissions by 2050 to limit global warming to 1.5 degrees Celsius above pre-industrial levels, the aspirational goal of the Paris Agreement.

The paper came out a month after the US and EU launched the High-Level Climate Action Group, which is designed to raise pressure on nations around the world to be "ambitious" with elevating their emissions goals in advance of the COP26 meeting in November in Scotland.

The carbon tax as proposed would act as a "price corridor" for fossil fuels, giving investors greater certainty about pricing. The carbon trading programs in place today have the perverse effect of reducing demand for fossil fuels, but also reducing their cost, incentivizing ongoing use by keeping them price-competitive with alternatives. "This is where carbon pricing comes into play as it makes fossil fuels and other high-emission activities more expensive," the report said. 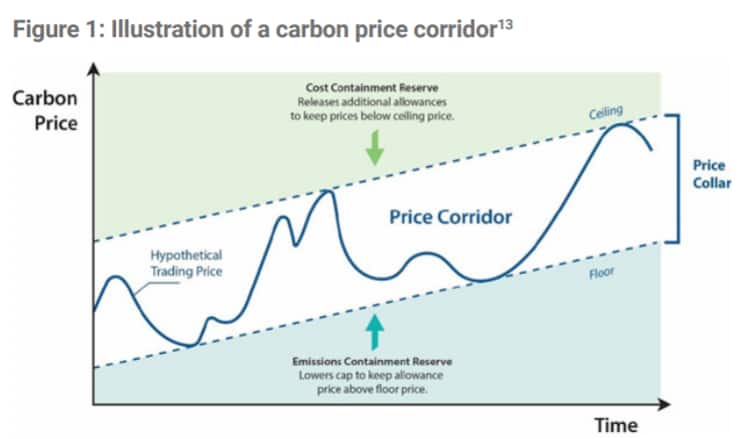 By keeping fossil fuels relatively expensive, governments can send "a broad signal across the different industries and associated investments" that they are committed to a net-zero transition, the alliance said.

This would complement the many efforts by governments and private stakeholders—in the US, EU, China, and elsewhere—to put pressure on investors to incorporate climate risk into their decision-making and to increase their disclosure of exposure to climate risks (see articles here and here).

Those carbon prices also can raise revenue to further support the energy transition and to lessen the impact on affected parties.

The group said both the floor and ceiling should be increased over time, though it also acknowledged that the OECD carbon price of $147/mt is on the high side of recent estimates of what is needed to control global temperatures. The largest varying factor in those estimates is a model developer's assumptions about the pace of advances in carbon capture technology and how industrial processes can be revised to reduce emissions, the report said.

Again citing the OECD report, the alliance said that 64 countries, regions, and states have some type of carbon-pricing initiative, covering about 20% of carbon emissions. Prices vary considerably, not only by country, but also by the form of emissions they cover.

A global price corridor will balance those differentials, and do it in a simple, direct way, the report said. Other options for carbon pricing, such as border adjustment mechanisms applied to imported goods, are much more complicated and would be subject to World Trade Organization disputes.

The alliance also emphasized that the carbon price must be accompanied by other major policy measures, such as ending fossil fuel subsidies, investing in development of zero-emissions energy technologies, boosting green construction and building retrofits, and moving vehicle transportation away from fossil fuels.