A clearer path to the UK's ambitious 50 GW of offshore wind by 2030 goal emerged in recent days as National Grid ESO laid out what it sees as the optimal transmission requirements and nearly 7 GW of projects won financial backing from the Department for Business, Energy & Industrial Strategy (BEIS).

British electricity system operator National Grid ESO's "Pathway to 2030 Holistic Network Design" (HND) would link 23 GW of projects with each other and demand centers, partly through hubs, in the first step away from the radial transmission design that until now underpinned the UK's reign as the top-ranked nation in Europe for offshore wind installation at 12.2 GW currently.

How to connect the offshore wind farms on the horizon will be key. The HND defines a network topology (see map below), capacities, and interface sites. It provides connection recommendations for 23 GW of offshore wind and the associated transmission network to get the power produced to where it is needed.

S&P Global Commodity Insights Senior Research Analyst Diego Ortiz Garcia told Net-Zero Business Daily what struck him about the plan was that it was a cost efficient path to developing the offshore areas needed to make a stab at getting to 50 GW. 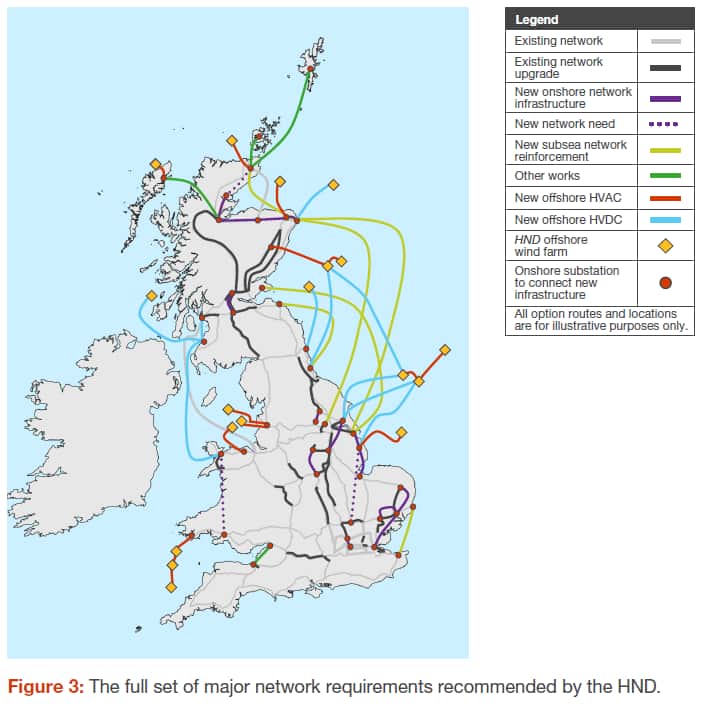 National Grid ESO said its recommended path offers overall net consumer savings of about £5.5 billion. The design leads to an extra £7.6 billion in capital costs due to additional offshore infrastructure, but this is outweighed by £13.1 billion in constraint cost savings compared with a radial design, it said.

Tom Thackray, Confederation of British Industry decarbonization program director, told Net-Zero Business Daily on 12 July, the plans "will support a modern and flexible energy system and ensure all parts of the UK can benefit," but "to enable this vision it is essential that planning and consenting regimes are streamlined to enable the swift roll out of the infrastructure this decade."

On 5 July, the Crown Estate, which oversees government lands in England, Wales and Northern Ireland, advanced those Celtic Sea efforts, announcing the areas expected to be part of the "mid-2023" auction. It expects the areas to deliver 4 GW of floating offshore wind by 2035. HVDC is a much better option for floating offshore wind because the sites tend to be further from the shore, Ortiz Garcia noted.

SSEN Transmission Managing Director Rob McDonald said the plans were a "huge step forward" for the UK's energy security and an electricity system independent of imported gas. He added that "this blueprint can unlock Scotland's vast offshore wind resources."

Until now, the UK's offshore wind fleet has connected to shore using a "radial" model, with each facility requiring its own transmission connection. However, as the country's capacity increases, such a model is unsustainable. Germany is the only European country with what is known as a "mesh" system, where power flows across the system and comes ashore at integrated landing points, minimizing the onshore impact. Both Sweden and Norway are looking into this model though, Ortiz Garcia said.

Ed Birkett, head of energy and climate at Onward, a center-right thinktank, tweeted: "Interestingly, this still looks like mainly a "radial" design, with a few "mesh" elements. I can see why this makes sense, as you can't just run a single massive cable from Scotland to southern England."

Complementing the transmission plan was the release of the results of the biggest round yet of the UK government's renewables auction scheme—AR4. A total of 93 projects won support from the government. The 10.8 GW of projects are equivalent to 14% of the UK's current 75.8 GW of capacity.

AR4 cements the UK's position as the European leader in offshore wind, trade group WindEurope said in a statement.

The prices, said Claire Mack, chief executive of trade group Scottish Renewables, "showed how competitive renewable energy can be with the right government support," but she warned such prices made it harder to invest in the UK supply chain, where prices are generally higher than overseas, arguing that cost cannot be the only factor when selecting successful projects.

CBI's Thackray added: "The results from the latest CfD auction round are a vote of confidence in the UK's plans for the energy transition. Amid huge volatility in global wholesale markets, renewables are attracting investment at low prices that can boost energy security and affordability for households and businesses."

However, the UK's 50 GW by 2030 target is too optimistic, even with the start it has already made, said Ortiz Garcia, citing the three or four years required to obtain permitting, a shortage of vessels, and supply chain issues as three of the key impediments.

Not enough to meet goals?

Even with all this planning and support for offshore wind, the UK is still not far enough along the path to meeting its net-zero goals. The independent Climate Change Committee (CCC) said in a Progress Report issued 29 June that the government had set ambitious targets, but it found "scant evidence of delivery against these headline targets so far."

In most areas, the likelihood of under-delivery is high, it said, warning that "this is a high-wire approach to net-zero. For the UK's climate lead to be effective, the world must have confidence that we will keep our promises and that we have a clear and effective program to achieve our commitments."

Deployment of renewable electricity is one of the UK's strongest suits, but the government was failing badly when it came to energy efficiency in homes plus agriculture and land use, it said.

As a result, the CCC called for contingency plans that could include curbs on demand growth for flights, comprehensive reform of planning legislation, fixes for the skills gap bottlenecks, and a promised Future Homes Strategy.