The UK government has launched a consultation on a sustainable aviation fuel (SAF) mandate with the potential to introduce blending targets that would be more ambitious than the targets announced earlier this month as part of the EC's Fit for 55 package.

The UK Department for Transport said on 23 July it could require flights departing the country to begin using a minimum SAF blend as early as 2025, rising to a 10.3% minimum blend rate by 2030, and reaching a 75% blending floor by 2050. The plan is now open for public comment through 19 September.

By 2050, the increased use of SAF would avoid up to 23 million mt/year of CO2 emissions, compared to scenarios spelled out by the Department in a report published earlier this year. 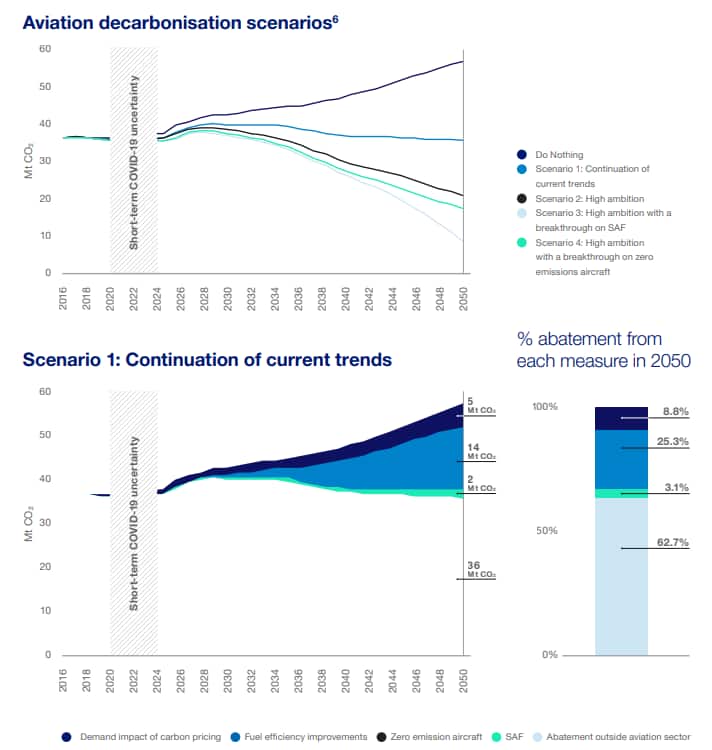 This would be necessary to decarbonize an industry that is projected to be the second-highest CO2 emitter for the UK by 2050, unless its trajectory is changed. In 2020, the UK set a goal for at least a 68% reduction in GHGs by 2030, on track to reach net-zero by 2050.

On the same day that the consultation was published, the ministry announced that eight companies have been shortlisted for sharing government grants of £15 million (almost $21 million) to convert household waste and sewage into SAF. It has already provided about £65 million (almost $91 million) in prior grants.

"Aviation will be central to our future growth and plans to build back greener from the pandemic, which is why we have invested over £20 million in the past year to decarbonize the sector in line with our world-leading net zero targets," said Transport Secretary Grant Shapps in a statement.

The government said it wants the UK's SAF industry to be "world leading and as ambitious as possible," he said.

The UK's consultation was spearheaded by the Jet Zero Council, a group of government, fuel producer, and environmental groups that was formed last summer. The council in October 2020 said that it would support investment in "first-of-a-kind" SAF plants and pursue new production pathways as it works to decarbonize UK aviation.

Stakeholders are asked to comment on the need for the mandate, the eligibility criteria for SAF, compliance and reporting schemes, and how the program might interact with EC other international aviation fuel programs.

Comments are expected on the types of fuels to be allowed in the program. The department proposed that only SAF produced from waste-derived biofuels (also known as hydrotreated esters and fatty acids, or HEFA), renewable fuels of non-biological origin, nuclear-energy-based, and recycled carbon fuels would be counted toward the mandate. Any hydrogen used in production processes must be low-carbon, the department added.

At the same time, the consultation proposes that HEFA SAF might be capped "to drive commercialization of less developed SAF production pathways and to prioritize biofuels use on roads in the short term."

The majority of SAF plants announced in Europe will use HEFA as a feedstock until 2027, whereas other pathways, such as alcohol-to-jet fuel, hydrogen, or gas-based Fischer-Tropsch processes will likely come into play in later decades as the EU aims for its 2050 SAF target.

Any of these technologies could receive support from the UK government, Shapps said. "Some have suggested that a [blending] mandate alone will not be enough to grow a UK SAF industry quickly," Shapps said. "Through this consultation, we are also beginning a conversation about whether there is more we can do to provide certainty for producers looking to build SAF plants and invest in the UK."