The Netherlands to refit natural gas network for pure hydrogen

The Netherlands has asked its grid operator to build a ring-shaped hydrogen pipeline to supply industrial clusters in two countries at first, and later trucks, ships, and buildings.

State-owned infrastructure operator Gasunie, which runs natural gas networks and storage in the Netherlands and Germany, is set to develop a Dutch national hydrogen network, after a request by the State Secretary for Energy and Climate. Because green hydrogen is not yet a profitable sector, the pipeline would have seen only gradual investment without the move.

Gasunie already operates the 12-km Yara-Dow hydrogen pipeline, commissioned in 2018. The pipeline in the Netherlands runs between Dow Chemical Benelux's facility in Terneuzen and Norwegian ammonia producer Yara's facility in Sluiskil. The collaboration is part of the Dutch government and Gasunie's Green Deal on Hydrogen, a green industrial growth partnership agreed in 2016.

Gasunie says the planned national hydrogen infrastructure will be the first large-scale retrofit of natural gas pipelines, making use of existing pipelines for 85% of the backbone to save substantially on costs. The project, with an estimated price tag of €1.5 billion ($1.77 billion), is scheduled for completion in 2027.

The move follows publication of a report, the HyWay27 report by PwC, commissioned by the Dutch government, the Rotterdam Port Authority, and network operators Gasunie and TenneT.

The report examined whether the gas grid could be cheaply repurposed for hydrogen and identified sources of hydrogen supply and demand.

To be reused, the 1,200 km-long, 36 inch-diameter pipelines would need to be cleaned and prepared, according to the report. Gasunie would also need to buy the existing gas networks from its own network operator, GTS. 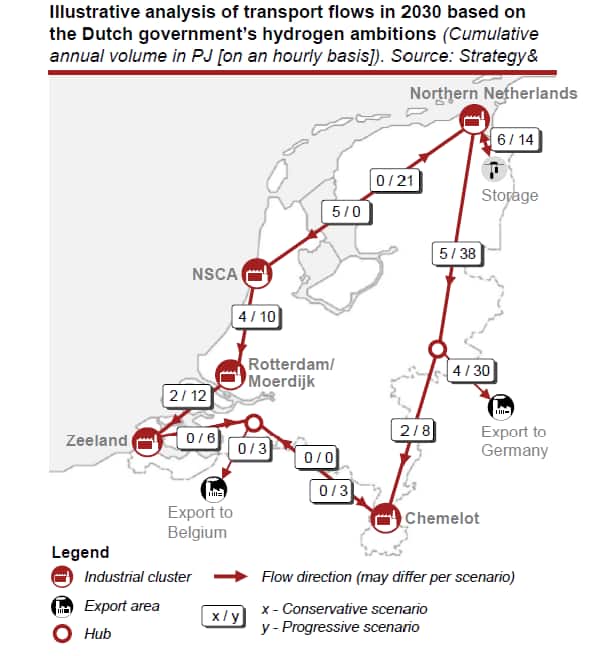 The pipeline would make hydrogen cheaper to transport and could also boost the development of the hydrogen market by connecting more producers and consumers, allowing a broadening of potential markets and a greater number of producers.

"These dynamics will contribute to the development of a liquid (commodity) market for hydrogen," wrote the authors of the report. The report found both green and blue hydrogen could make a contribution by reducing CO2 emissions.

From the perspective of the Dutch government, the project follows up on to initial efforts to position the country at the forefront of hydrogen transportation in Europe by 2030. In 2019, the government laid out a National Climate Agreement, a policy targeting 3-4 GW of electrolysis capacity by 2030, and the following year it published a strategy on hydrogen.

The Dutch government is seizing the chance for the Netherlands to become a "hydrogen hub" in Europe.

The Netherlands has a head start in the hydrogen race, with proximity to Europe's largest container seaport in Rotterdam, an international natural gas pipeline network, North Sea offshore wind farms, national salt caverns and depleted natural gas fields that might be used for hydrogen storage, found the report.

The proposed connections would be part of a future European Hydrogen Backbone, an interconnected hydrogen network stretching across Europe unveiled in a 2021 paper by Gas for Climate, a group of 10 companies including Gasunie that represent 75% of Europe's gas demand. 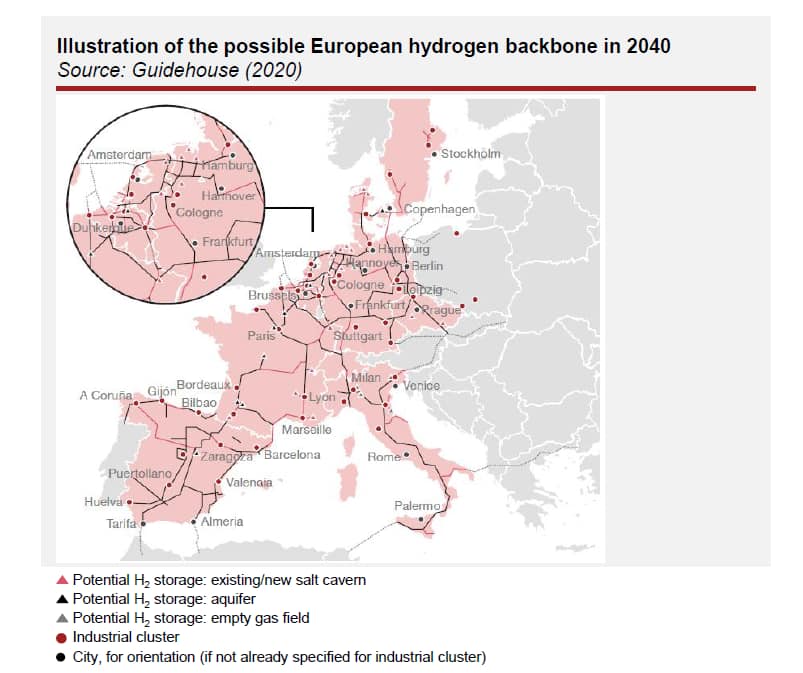 The heart of the hydrogen pipeline is the Dutch Rotterdam and Groningen industrial areas, where many of the planned or active EU hydrogen production projects are located, but it will also serve other industrial clusters in the Netherlands like Chemelot in Limburg.

German energy company Uniper and the Port of Rotterdam Authority are planning a hydrogen production plant in Rotterdam by 2025 with an initial capacity of 100 MW.

In Groningen, a consortium of Gasunie, Groningen Seaports, and Shell Nederland, banded together as the NortH2 project, will complete a feasibility study this year with the aim of generating green hydrogen from offshore wind farms, Gasunie said.

While the pipeline would supply hydrogen to northwest German industrial customers, another pipeline could import captured CO2 from there to projects like the Port of Rotterdam and Gasunie's Porthos Carbon Capture, Utilization and Storage (CCUS) project.

The pipeline will be engineered for hydrogen compression. "International research and testing show that the design parameters for high-pressure natural gas pipelines are in line with the new hydrogen pipelines that will be constructed," a Gasunie spokesperson told Net-Zero Business Daily.

Gasunie has decided to modify the pipeline so it can deliver 100% hydrogen rather than a blend. "Although it is technologically possible to blend natural gas and hydrogen, Gasunie [is focusing] on the development of a pure hydrogen backbone for several reasons. Not only does the Netherlands have the opportunity to make a separate hydrogen backbone quite easily [by] using existing natural gas pipelines, but also it is not very efficient to blend pure hydrogen with natural gas and separate it at the end to enable the use of hydrogen as a resource, e.g. for the petrochemical industry," the Gasunie spokesperson said.

Gasunie in 2018 said it would increasingly transport different energy carriers, such as hydrogen and green gases, through its pipelines.