A new survey and a new report each show how world leaders are being challenged by the complexity and costs of responding to the COVID-19 pandemic, reducing GHG emissions, and transitioning to secure, cleaner energy supplies.

The 13th annual survey by the World Energy Council (WEC), released on 27 January, finds the highest levels of uncertainty—defined as "What keeps you up at night?"—about energy commodity prices, geopolitics, economic growth, and climate change management. More than 2,200 respondents from energy companies and governments from 100 countries shared their viewpoints.

"Economic growth continues to concern global energy leaders, with the route out of the disruption caused by the COVID-19 pandemic far from certain," WEC said.

The concern about global, regional, and national economies is reflected in the "keeping me up at night" response that energy leaders gave across the board. Every economic, energy, and social indicator in the survey, except for nuclear power, showed an increase in survey respondents' uncertainty rating in 2021 compared with 2020 (see graph). 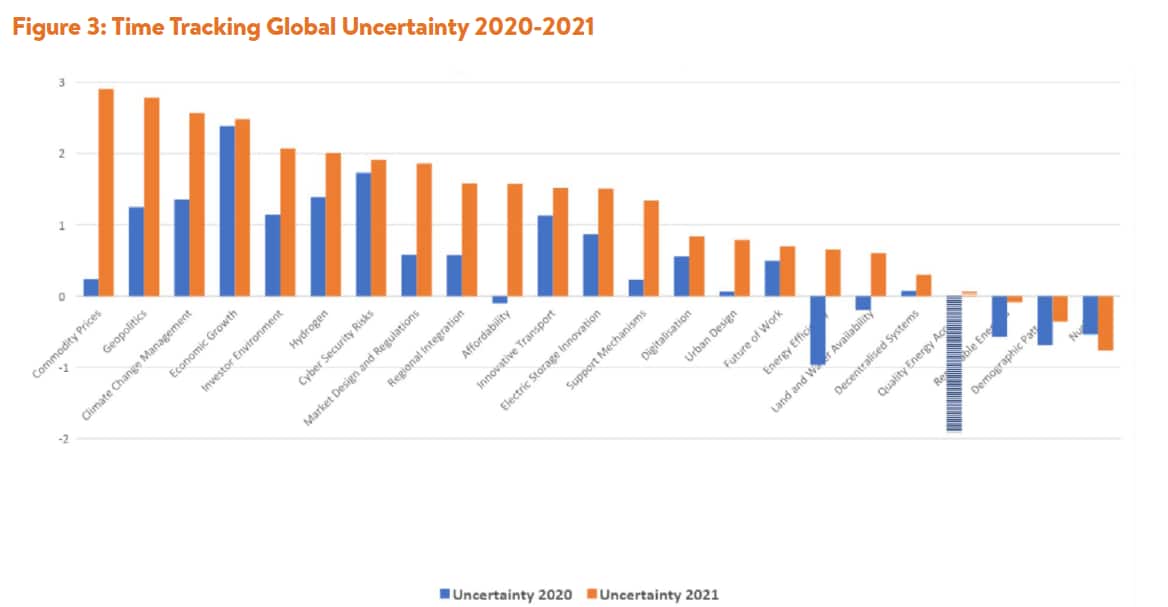 Volatile energy prices in 2021 are reflected in the surge by commodity prices to the top of leaders' concerns.

IHS Markit raised the same concern in December. In completing a report for the International Energy Forum, IHS Markit estimated upstream investment in the oil and gas sector was $300 billion and $341 billion 2020 and 2021, respectively, compared with $525 billion in both of the two preceding years. Fossil fuel investment needs to return to that higher range, if the world is to avoid volatile prices and a cycle of energy cost inflation, it said.

"While the energy transition proceeds, underinvesting in oil and gas before renewables and other low-carbon technologies are ready to scale up to meet energy demand could create recurrent energy crises of the kind we saw in Asia and Europe over the last few months, resulting in elevated prices and adverse economic consequences," IHS Markit Vice Chairman Daniel Yergin said last month. 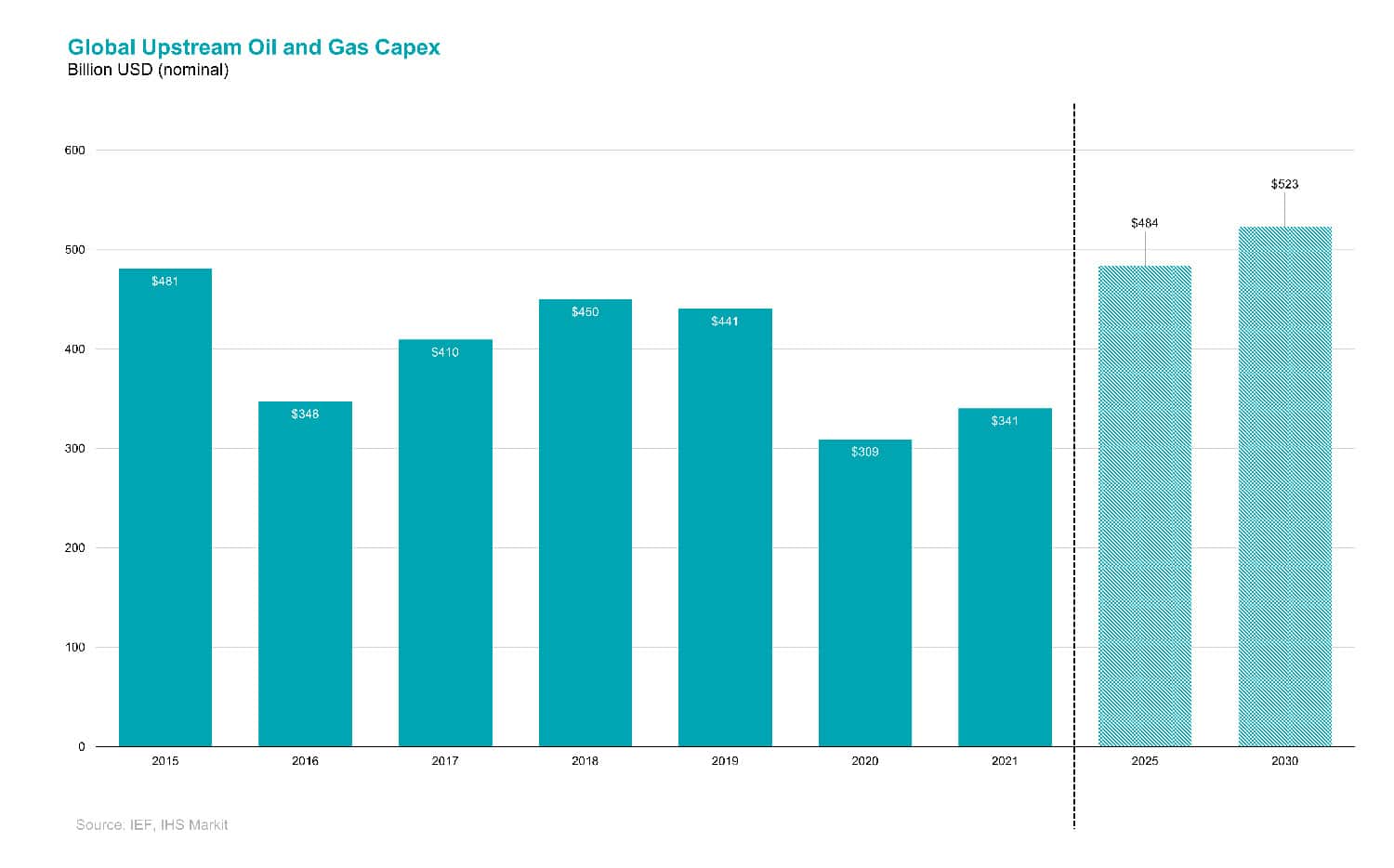 Climate change management came in third on the WEC survey list of concerns, which was conducted in the weeks after the COP26 climate summit in Scotland.

At the same time, the summit laid bare how much remains to be done. "It is difficult to aspire for a global consensus on transition pathways when the 'how-to-get-there' directions are not the same for everybody," WEC said. "The real challenge becomes how to get all the different actors from energy and adjacent sectors around the table, with all their varying circumstances and perspectives, to be able to better navigate the energy transitions challenge together."

The survey also asked the global energy leaders about what they are doing now to move forward on meeting their climate goals and obligations. Renewable energy topped the list in 2021, as it did in 2020. But, for the first time, it's the top action item for leaders in every region of the world, including the Middle East and Gulf states, according to WEC. Within renewables, hydrogen energy has become the highest priority, but the report noted there was "a high degree of uncertainty across most regions … [on] how to build a functioning hydrogen economy."

WEC found that another issue that emerged strongly in 2020 has remained top-of-mind. "Even before the onset of COVID-19, we had already begun to see the rise of the social energy agenda. A consequence of this health crisis is that it has put people at the center of the conversation on [the] global energy transition and given humanity a clearer voice in an otherwise polarized and fragmented debate," Angela Wilkinson, secretary general and CEO of WEC, said when last year's survey was published.

WEC's surveys show "a growing awareness among energy industry leaders of the unavoidable truth that we must humanize our energy systems and address new energy justice concerns to be successful," she said.

WEC's report came during the same week that McKinsey & Co. released an update on what the cost would be to achieve a net-zero transition by 2050, a global-scale calculus of the decisions facing WEC survey respondents.

McKinsey said that global capital investment through 2050 will need to reach $275 trillion to achieve a net-zero carbon economy. That's about $9.2 trillion per year, or an increase of $3.5 trillion annually from the current level, according to the consulting firm.

In addition, McKinsey said that about $300 billion per year of current capital investment must be shifted from high-carbon assets to low-carbon assets.

"The economic transformation required to achieve net-zero emissions by 2050 will be massive in scale and complex in execution, yet the costs and dislocations that would arise from a more disorderly transition would likely be far greater, and the transition would prevent the further buildup of physical risks," McKinsey said.

The world will have to simultaneously double the amount of energy produced and eliminate or neutralize its carbon emissions. "By 2050, oil and gas production volumes would be 55% and 70% lower, respectively, than they are today. Coal production for energy use would nearly end by 2050," it said. "Production of hydrogen and biofuels would both increase more than tenfold between 2021 and 2050."

These types of changes will not fall evenly on each country or region—which highlights WEC CEO Wilkinson's observation that the energy transition must reflect social needs for jobs and equitable energy access. For example, McKinsey said that 185 million jobs will be lost worldwide by 2050 in high-carbon industries, but that 200 million new jobs will be created, not necessarily in the same regions or nations.

And while the energy transition is critical to the net-zero world, McKinsey emphasized it's only part of the puzzle. "The seven energy and land-use systems that account for global emissions—power, industry, mobility, buildings, agriculture, forestry and other land use, and waste—will all need to be transformed to achieve net-zero emissions," it said.