Singapore Exchange seeks to phase in climate risk disclosure from 2022

Publicly traded companies in Singapore would be required to disclose their climate risk under internationally recommended guidelines, starting as early as fiscal year 2022 under a Singapore Exchange proposed roadmap.

The Singapore Exchange (SGX) proposed 26 August to phase in climate risk disclosures over a three-year period as part of a roadmap, which spells out the requirements it seeks for reporting and verification.

The SGX proposal comes on the heels of a US-Singapore agreement to collaborate on climate risk and clean energy technology development. Although Singapore contributes only 0.1% of global GHGs annually, it remains a vital shipping hub and financial center for Southeast Asia, located at the intersection of the Malacca Strait and South China Sea and prone to climate-fueled coastal flooding, according to the city state's National Climate Change Secretariat.

Driven by investor demand for consistent material information, the SGX said, the climate-risk disclosures would apply to financial and non-financial sectors, the latter including agriculture, food and forest, energy, materials and buildings, and transportation. These are the sectors the Taskforce on Climate-Related Financial Disclosures (TCFD) has said would be most affected by climate change and the transition to a lower carbon economy.

The SGX said these non-financial industries account for more than 90% of the GHG emissions and 40% of the economic activities among members of the Association of Southeast Asian Nations.

The TCFD, which is an international advisory group formed in 2015 to provide support and promote standardization for climate risk disclosure, recommends a two-pronged approach, where general applicable recommendations are supplemented by specific sector guidance.

"I believe we are the first exchange in Asia to propose mandating climate disclosures in accordance with the TCFD recommendations," Tan Boon Gin, CEO of SGX RegCo, said of the proposed roadmap and the start of the one-month comment period, which ends 27 September. SGX RegCo is a wholly owned subsidiary of the exchange that is responsible for enforcing SGX regulatory actions. 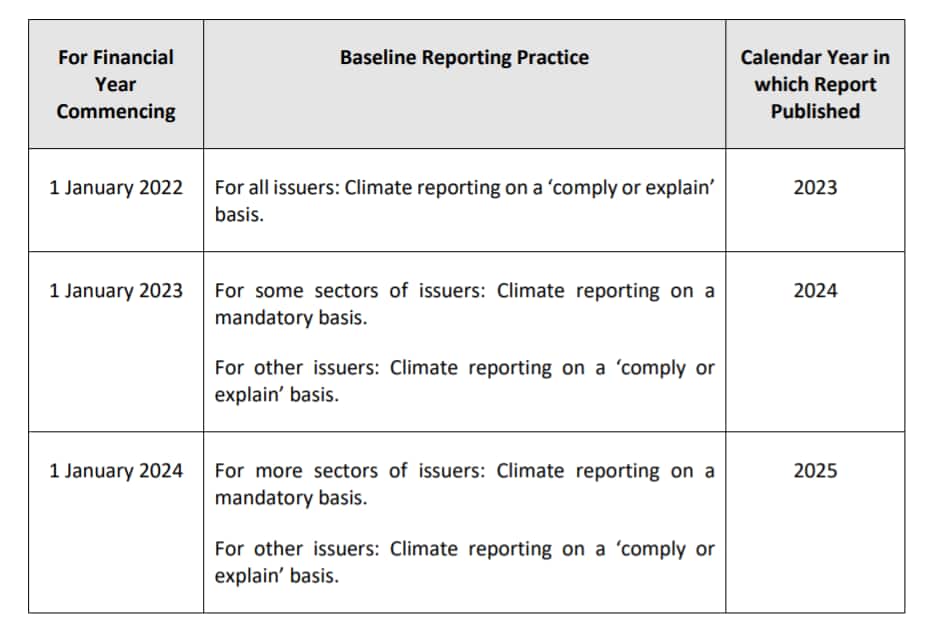 The SGX, which has 40% of its listed companies based outside of Singapore, has been mandating sustainability reporting since 2016, but a May 2021 review of reports published as late as December 2020 revealed that less than a quarter of companies disclosing risks identified climate change as a material topic, according to Tan.

The movement toward TCFD disclosures is being driven by stakeholder demand, "and I am not just talking about investors, but also lenders, insurers, customers, and suppliers," Tan said, adding: "If your company fails to act, you risk increasing your cost of funding and being denied access to financial facilities and supply chains."

The SGX is proposing to require companies disclose Scope 1 and 2 GHG emissions; reporting of Scope 3 emissions, if deemed appropriate, would be included as well. All disclosures would follow an internationally accepted GHG accounting protocol. Scope 1 covers direct emissions from owned or controlled sources, while Scope 2 covers indirect emissions from the generation of purchased electricity, steam, heating, and cooling consumed by the reporting company, and Scope 3 includes all other indirect emissions that occur in a company's value chain.

With its announcement, SGX is seeking comment on requiring the disclosures to include methodologies and emission factors as well as climate-related scenario analysis that describes how resilient company strategies are to climate-related risks and opportunities.

"In particular, issuers should take into consideration a transition to a lower carbon economy consistent with a 2 degrees Celsius or lower scenario, and where relevant, scenarios consistent with increased physical climate-related risks," SGX said.

The exchange is not proposing to require companies to follow a standard reporting framework for disclosures, given the mixed response of companies, and also is not requiring outside audits of sustainability reports that include climate risk disclosures.

Rather, SGX is proposing that companies subject their sustainability reports to internal assurance provided by auditors to enhance reliability of reporting.

The purpose of the assurance would at minimum include whether the data being reported is accurate and complete, SGX said, adding that the listed companies may also choose to have their sustainability reports checked by external auditors or an independent assurance services provider.

The Bank Policy Institute, which represents large banks such as HSBC, Citibank, and Goldman Sachs, has cautioned against requiring outside audits of climate disclosure in comments to the US Securities and Exchange Commission, which is due to issue its own climate risk disclosure proposal by the year's end.

To further assist companies with sustainability reporting, SGX said it has proposed a list of 27 environmental, social and governance (ESG) metrics that companies may use with their submissions. SGX also said it is seeking comment on a proposed data portal where investors can access ESG data in a structured format as reported by companies in alignment with these 27 metrics and disclosure requirements.

In its proposal, SGX also is seeking views on whether it should prioritize mandatory disclosure for companies based on a size-based approach, market capitalization, or other thresholds.

The Swiss Federal Council on 18 August approved parameters for writing climate disclosure rules that would apply to companies with at least 500 employees and $21.8 million in assets.

Lim Tuang Lee, assistant managing director for capital markets with Singapore's central bank—the Monetary Authority of Singapore (MAS)—called the SGX proposal "a timely one" because it is an important step in facilitating Asia's transition to a low-carbon economy.

The MAS itself is gearing up to protect its foreign reserves against climate-related risks. It has dedicated $1.8 billion to a specially created Green Investment Programme that is charged with catalyzing sustainability projects in Asia and positioning Singapore as a hub for green technology.