The company is the latest top-three original equipment manufacturer (OEM) to ramp down US operations or consolidate its supply chain. In June 2021, top-ranked Vestas sold a tower manufacturing facility in Pueblo, Colorado, to South Korean firm CS Wind for $150 million.

Mothballing of SGRE's blade manufacturing plant in Fort Madison, Iowa, and nacelle assembly plant in Hutchinson, Kansas, will take place in 2022 and July 2022, respectively, it said.

SGRE said it continued to mull its US onshore options, a sector where the company sees prospects undercut by supply chain problems and Congress' failure to advance a climate bill with vital extensions for subsidies.

S&P Global Commodity Insights Senior Research Analyst Indra Mukhurjee told Net-Zero Business Daily on 25 May that the onshore sector's fundamentals remain very strong, but it is about which companies can "outlast the storm" in order to capture future opportunities.

In addition to streamlining their operations, wind OEMs are also looking at lower cost locations than the US and western Europe, said Mukhurjee. Mexico has emerged as an important blade producer. It currently has factories owned by TPI Composites, LM Wind Power, and Nordex (currently run by TPI).

The company blamed a GE intellectual property lawsuit as well as delays in a US onshore market anticipating climate legislation (and the tax breaks developers are seeking) for its decision to take the plants offline, stressing the move was temporary and it remained "committed to the US wind market and to US manufacturing."

SGRE said it was unable to pursue orders in the US while it waited for the GE spat to be resolved by the US International Trade Commission, and in the intervening period, the pace of installations in the American onshore wind arena slowed, leading to a "production gap" in 2022.

Shannon Sturgil, SGRE Onshore North America CEO, said in a statement last week that the company "explored many options to address the current shortfall, and ultimately found the hibernation plan to be the most viable option for the long-term success of our manufacturing and assembly plants" in the US. Hutchison and Fort Madison, the locations set to be mothballed, are the company's only North American manufacturing sites.

About 4 GW of wind capacity had experienced delays at the end of 2021, ACP said, adding that around 1.1 GW of that total came online in the first quarter. However, a further 1.693 GW had been delayed by 31 March, the trade group said.

It's a picture that looks even worse in 2023. In its April Short-Term Energy Outlook, the US Energy Information Administration estimated the US added 14 GW of new wind capacity in 2021, but only expects 10 GW of new wind capacity will come online in 2022 and 4 GW in 2023. The pace of growth is set to slow because a tax credit is currently set to expire at the end of 2022 and much-publicized offshore wind auctions will not net significant installations for some years.

The delays and SGRE mothballing come after global turbine sales hit record levels in 2021 and after SGRE climbed the rankings table. According to GWEC, 30 wind turbine manufacturers installed 104.7 GW of new wind power capacity in 2021 even as the COVID-19 pandemic and increasing pressure from commodity price increases and logistical problems disrupted supply chains.

A total of 29,234 wind turbines were installed worldwide by 30 wind turbine manufacturers in 2021, of which 18 are from Asia Pacific and 9 from Europe, the GWEC data show.

Vestas remained the top turbine supplier, accounting for 17.7% of the new installations. Chinese company Goldwind placed second with 11.8%, holding its ranking from 2020, while Siemens Gamesa also had a record year with a 9.7% global market share, moving it up two positions to third place in 2021, the trade group said.

GWEC said 19 May it was aware financial results were worsening due to an ultra-competitive price environment, higher external costs, and continuing bottlenecks that are preventing a faster expansion in wind energy.

Bottlenecks are one of the problems SGRE's newly installed CEO is squaring up to. The executive, Jochen Eickholt, was parachuted in from Siemens Energy to fix the company's production woes, specifically with its flagship new onshore turbine.

The company also expects to pass through more raw material price increases (see below) to customers and implement cost indexation or escalation in new contracts, he said. 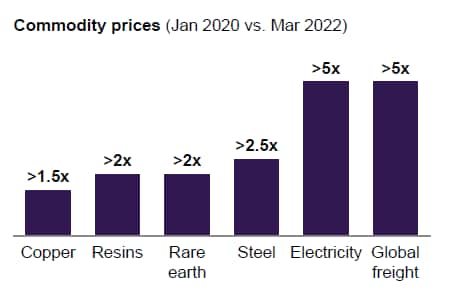 But prior to February when Russia invaded Ukraine, SGRE launched its Mistral program, which is intended to transform the company's operations, including streamlining its product line and becoming a levelized cost of energy (LCOE) "market leader," Eickholt said. The company hopes to increase its margins in the medium-term.

S&P Global analysts said in January the LCOE for new US onshore wind supply are set to rise over the next five years from 2020's record-low LCOE. That record low was due to lower prices and a commoditization of the onshore manufacturing arena.

The 2022 onshore wind LCOE will be higher than the 2021 level owing to significantly increased capital costs, but extensions of the Production Tax Credit (PTC) qualification window have mitigated an equivalent impact on LCOE, they said. Of greater impact to the LCOE than the temporary capital cost increase is the looming PTC phaseout at the end of 2022, they added. This also contributed to SGRE's plant closures.

The looming phaseout and its chilling impact on installations come as wind's role in the US generation stack reached new heights this spring. On 29 March, wind turbines in the Lower 48 states produced 2,017 GWh of power, making wind the second-largest source of generation that day, behind only natural gas, according to the US Energy Information Administration's (EIA) Hourly Electric Grid Monitor.

Wind garnered a larger slice of the power mix than either coal-fired and nuclear generation on other days earlier in 2022, and then surpassed both sources combined on a single day for the first time on 29 March, the EIA said.

The US is the second largest market globally for wind installations. ACP data show more than 138 GW of onshore wind capacity was installed at the end of first quarter.

But the need to ramp up wind capacity installation is now more dire if the world is to avert catastrophic global warming, GWEC said 4 April. A four-fold increase in the pace of the global wind fleet buildout is now necessary to avoid a temperature increase of more than 1.5 degrees Celsius compared with pre-industrial levels, as the Paris Agreement seeks, GWEC added, rather than the three-fold hike in the pace of construction called for a year earlier.

According to the International Energy Agency, the world needs to be adding around 390 GW of energy from wind generation by 2030 to keep the world on track to limit warming to 1.5 C.