Crown Estate Scotland said 22 July it had received 74 applications to secure rights to seabed leases across 15 areas (see map below) in waters off the northern-most part of the British Isles. The bidders will start receiving initial offers to move forward with their applications in January 2022, it added.

The agency, which oversees government lands in Scotland, is in charge of a process that the devolved Scottish government expects to lead to the construction of up to 10 GW of fixed-bottom and floating offshore wind capacity. 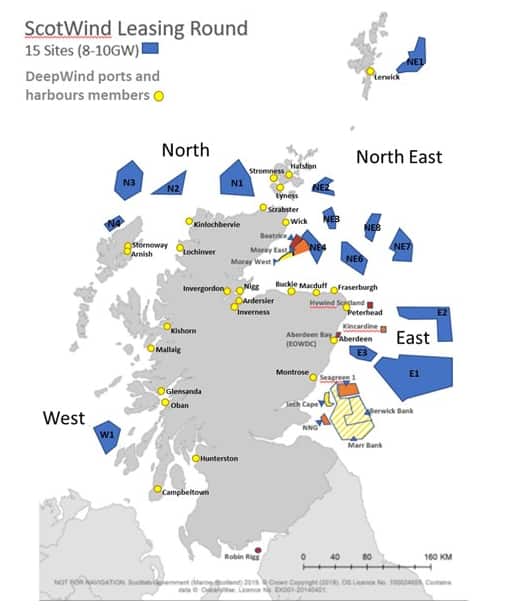 ScotWind is the first tender globally that offers both fixed-bottom and floating technology opportunities. The deadline for bids was 16 July, and it attracted some of the biggest names across the fixed-bottom offshore wind and the oil and natural gas sectors.

That's partly because, as ScottishPower CEO Keith Anderson put it in announcing his company's participation: "Scotland is the windiest country in Europe." It is also a result of the UK's position as the largest offshore wind market in the world at the moment, and the momentum created by a hard-fought, pricey auction for leases in English waters earlier in 2021.

Oil and gas majors pile in

Anglo-Dutch oil and gas major Shell teamed up with ScottishPower, a subsidiary of Spanish renewables giant Iberdrola. The companies said 16 July they had submitted a floating wind-only bid for leases off the northeast coast of Scotland.

By 2030, BP aims to have developed around 50 GW of net renewable generating capacity, up from 3.3 GW in 2020. The BP and EnBW ScotWind bid follows a pattern established in the 2021 auction in English waters, where they secured the rights to develop two 1.5-GW projects in the Irish Sea.

The Scottish government has said bids will be evaluated on experience, local content, and delivery readiness, rather than on price. While the UK tops the global offshore wind capacity table, criticism has been leveled at leaders in Westminster and Holyrood (the seats of the UK and devolved Scottish governments, respectively), plus developers, for failing to replicate that growth when it comes to local content and supply chain development.

BP in particular took heed of those stipulations, promising Scotland would become the company's "global center for offshore wind excellence." It also promised to invest in an electric vehicle network, green hydrogen, and shipbuilding in Scotland. In addition, BP signed a Heads of Terms agreement to financially back Forth Ports' plan for a "renewables hub" at the Port of Leith on Scotland's east coast.

Rival energy major TotalEnergies, also a successful bidder in the UK Crown Estate (UKCE) Offshore Wind Leasing Round 4 for English waters earlier in 2021, teamed up with a familiar partner in a ScotWind consortium of its own.

The French company is working with Green Investment Group, controlled by Australian financial group Macquarie. The two partnered successfully on a 1.5-GW project located off the east coast of England in the UKCE auction, and have added Aberdeen-based offshore wind developer Renewable Infrastructure Development Group (RIDG) to their "Offshore Wind Power Limited" consortium.

Deep-pocketed Eni bought its way into the UK offshore sector for the first time in December 2020. Its first step into the sector involved acquiring a 20% stake in the first two phases of the 3.6-GW Dogger Bank project for GBP206.4 million. Dogger Bank will be the world's biggest offshore wind farm when completed in 2026.

The pressure is on oil and gas majors to diversify and some are willing to push hard for a slice of the offshore wind pie, Dalia Majumder-Russell, a partner at law firm CMS Cameron McKenna Nabarro Olswang, told Net-Zero Business Daily.

Eni purchased its Dogger Bank stake from two of the more established players in the offshore wind sector: Equinor and SSE Renewables. Each submitted ScotWind applications; floating offshore wind pioneer Equinor on its own and homegrown champion SSE Renewables as part of a consortium.

Equinor developed the 30-MW Hywind Scotland, the world's first operational floating offshore wind farm, and submitted an all-floating wind ScotWind bid. It said 19 July that ScotWind was a "good strategic fit with its ambitions to continue to develop its North Sea offshore wind cluster and further deepen its presence across the UK."

The cost of floating offshore wind (as well as the technological difficulties) has long hindered the sector's progress compared with its fixed-bottom cousin. However, Equinor noted in a statement announcing its ScotWind application that the company reduced its floating wind capital expenditure per megawatt by 70% between its Hywind demonstration project in 2009 and Hywind Scotland in 2017. Equinor said it is on track to reduce costs by a further 40% plus for Hywind Tampen.

SSE Renewables, meanwhile, teamed up with Japan's Marubeni Corporation and Danish investment group Copenhagen Infrastructure Partners. SSE said it has Scotland's "largest offshore wind portfolio and is building more offshore wind energy in the world right now than any other company." SSE's 1.1-GW Seagreen (see map above) offshore wind farm in the Firth of Forth will be Scotland's largest when completed in 2023.

The oil and gas companies as well as the established offshore wind players were expected to have submitted multiple applications, IHS Markit's Utkin said, but they're not the only ones doing so.

Magnora Offshore Wind, a partnership of Norway's Magnora and Franco-American engineering and project group TechnipFMC. The consortium submitted two bids with unnamed local partners, a source close to the company told Net-Zero Business Daily 21 July. When the consortium was unveiled in March, the partners said they had already begun work on their ScotWind application and would also be participating in a Norwegian lease sale in 2021.

Magnora and Equinor are not the only Norwegian bidders.

Norwegian-owned French platform developer BW Ideol, Belgian wind farm operator Elicio, and Munich-headquartered project developer BayWa r.e. announced their intentions to submit a ScotWind bid as early as July 2020. A spokeswoman for BW Ideol confirmed to Net-Zero Business Daily that a bid had been submitted and more details on its bid would be released in the coming days.

The results of the bidding were highly anticipated after the UKCE auction plus delays to the ScotWind process, sources said.

Crown Estate Scotland in February began a review of the details of the tender after the results of UKCE's auction came out. On 24 March, it announced the results of the review, which came in response to "revised market dynamics." The maximum fee was raised to £100,000/square km ($138,000) of seabed from £10,000/square km, and the threshold for local supply chain commitments that applicants must meet to request a lease increased to 25% from 10%.

Despite the added requirements, the number of bids didn't disappoint. "The high number of applications from developers shows just how much potential Scotland's seas hold for the future expansion of offshore wind," Crown Estate Scotland Director of Marine Colin Palmer said as the agency announced the total.

Competition is extremely high in offshore wind tenders at the moment, and 74 applications is a big number, said Utkin.

Clean energy advocates said the figure exceeds expectations. "It's great to see the sky-high volume of applications that ScotWind has attracted. This underlines our industry's ability and ambition to scale-up to reach net zero," RenewableUK CEO Dan McGrail said in a statement.

As part of efforts to reach its net-zero by 2050 target, the UK government wants to see 40 GW of installed offshore wind capacity in Scottish, English, and Welsh waters by 2030. As of March, the UK had 14 GW of capacity either fully commissioned or under construction, according to government-backed technology incubator Offshore Renewable Energy Catapult (OREC). A further 3.5 GW is in the pre-construction phase and consent has been authorized for 9 GW, it added.

There were seven offshore wind farms either fully commissioned or under construction in Scotland as of March, for an installed capacity of 2.3 GW. A further 3.5 GW is in pre-construction or has consent authorized, including the Inch Cape, Moray West, and Seagreen facilities. The Scottish government wants to see 11 GW in Scottish waters by 2030.

According to OREC's calculations, released in March, floating foundations would be used for 97% of the offshore wind capacity enabled by ScotWind, or around 633 structures in a 10-GW deployment scenario. That's because many of the ScotWind plan options have large areas of waters greater than 70 meters, making them unsuitable for even the largest fixed-bottom monopiles. OREC estimates show at least 1,295 km of high-voltage export cables will be required for the ScotWind facilities too.

IHS Markit is excited to share our first-ever diversity report, which showcases the work we’ve done to drive DEI in… https://t.co/YdsBx0Atvr

This recognition reaffirms our commitment to creating an inclusive workplace where everyone feels valued and apprec… https://t.co/pb1thbNdFT

IHS Markit is honored to be named as one of the Best Places to Work for LGBTQ+ Equality in @HRC Foundation's Corpor… https://t.co/BLRU14Hary

[2/2] Formed through representation from our global affinity networks, each of our regions, and key business areas,… https://t.co/0rkUi3Vqx4