Utility ScottishPower and Storegga, a decarbonization project developer, announced a partnership to begin operating the first of several intended green hydrogen production plants in Scotland in 2024, with the nation's iconic whisky industry lined up as early customers.

Cromarty Hydrogen will be located just north of Inverness, and it initially will produce 20 metric tons (mt) of green hydrogen per day, the partners said in a joint statement on 5 May. It will use renewable energy to drive electrolysis to produce green hydrogen. "Subject to customer demand, [it has] the potential to scale to 300 MW in a series of modular expansion phases," they added.

Depending on the performance of electrolysis units, 300 MW equates to about 130 mt/day of green hydrogen, according to information provided by Storegga to Net-Zero Business Daily by S&P Global Commodity Insights.

The initial customers will be distilleries, which use electric power or natural gas heat for mashing, fermentation, and distillation. Three distillers—Diageo, Glenmorangie, and Whyte & Mackay—participated in a feasibility study that led to the investment decision, the partners said. Other potential customers are food producers and industrial processors that use high levels of heat.

"This is a really exciting milestone in our ambitions to support the growth of green hydrogen production across the country and the decarbonization of heavy industry," said Barry Carruthers, hydrogen director at ScottishPower, in a media statement.

"Green hydrogen will enable fuel switching from natural gas at all the distilleries involved, as part of the distillers' ambition to achieve net-zero by 2030," added Storegga in a statement to Net-Zero Business Daily.

Storegga has already made a name for itself with carbon capture and storage (CCS) ventures, such as Acorn CCS with Ineos, Shell, and others in the UK; and River Bend CCS with Talos Energy in Louisiana. The company said it views the green hydrogen venture as a strategic fit. "Storegga is a pure-play decarbonization business; it's natural for us to be active in all projects and investments that reduce carbon emissions to the atmosphere," it said. "Green hydrogen is a natural transition for Storegga as it builds its low-carbon hydrogen portfolio. You can expect to see more on this in the coming months."

The distillers signing up for hydrogen from the Cromarty hydrogen project are helping to deliver on the Scotch Whisky Association's (SWA) "Sustainability Strategy," which aims for industry-wide net-zero operations by 2040. That would be five years ahead of Scotland's national net-zero goal and 10 years ahead of the global goal set by the Paris Agreement.

SWA's vision also includes elimination of all fossil fuel use when making whisky, reuse of whisky byproducts for bioenergy or raw materials for other industries, solely recycled materials in all packaging, and net-zero emissions from distribution.

Last year, SWA issued a report that stated its members had reduced direct, operational GHG emissions by 53% from 2008 through 2020. This was achieved through a combination of a 13% improvement in energy efficiency and a shift to renewables, which now account for 40% of energy use.

For Scotland, the planned green hydrogen projects represent one of many commercial ventures envisioned in the November 2021 draft Hydrogen Action Plan that set goals of 5 GW of hydrogen by 2030, and 25 GW of hydrogen by 2045. At the start of 2022, the Scottish government committed £100 million ($123 million) from its Emerging Energy Technologies Fund.

In the early years, industry will utilize CCS to offset emissions from blue hydrogen derived from natural gas, but because the country intends to use 100% renewable electricity by 2035, it said all hydrogen by that time will potentially be produced through electrolysis.

"Our priorities are to get as much renewable hydrogen into the energy system as quickly as possible while supporting the establishment of low-carbon hydrogen production at scale in the 2020s, linked to CCS," said Net Zero & Energy Secretary Michael Matheson when the plan was announced.

Numerous projects are underway across the country in addition to the Cromarty Project. One recent announcement came from H2 Green and the Highland Council. The two companies in March said they will install green hydrogen production and a storage hub in the Highlands region. Their first customers will be vehicle fleets.

Analysis by Scottish Enterprise, a government agency that supports business development, indicated that Scotland could deliver 21-126 TWh of hydrogen per year by 2045. That's approximately 600,000 mt to 4 million mt a year of hydrogen. If production at the high end of the range is achieved, Scotland will become a major hydrogen exporter to Europe, the report stated.

Production of green hydrogen in Scotland contributes to the hydrogen goal of the UK overall, which was outlined in a strategy announced in October 2021. That strategy was updated in April to increase the UK's targets to 2 GW of hydrogen production by 2025; 10 GW by 2030; and 20 GW by 2037 (green and blue hydrogen). 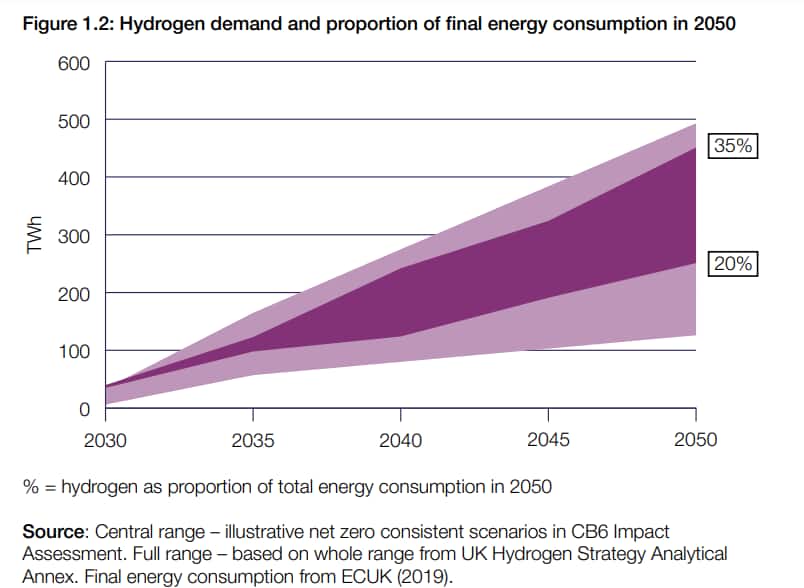 The UK Department for Business, Energy & Industrial Strategy (BEIS) is distributing $2 billion or more through 2025 to support the industry's growth, including in Scotland. Funds will back technology development and construction of at least four hydrogen hubs and pipelines for distribution. The backing also will include $1 billion for CCS hubs to offset CO2 emissions from blue hydrogen made from natural gas though the UK is targeting "at least half" of future production being green hydrogen.

In addition to distributing funds, BEIS is developing the UK Low Carbon Hydrogen Standard, which was issued in draft form in April. It identifies how to calculate the GHG emissions through the value chain and defines "low-carbon hydrogen" as having an emissions intensity of 20g or less CO2-equivalent per megajoule of produced hydrogen.