European power utilities making massive investments in offshore wind are still emitting too much carbon to stop global warming, a report by a think tank found.

Think tank Ember and the Europe Beyond Coal campaign released a report on decarbonization by electricity generating utilities, some of which were affiliated with oil and natural gas producers.

The report looked at 21 EU and UK power utilities, of which 16 have pledged to reach net-zero emissions by 2050.

The report covered a mix of private and state-owned companies from France, Italy, Germany, Bulgaria, Romania, the Czech Republic, Finland, Denmark, and Spain.

It used as a benchmark the International Energy Agency's (IEA) 2021 Net Zero Emissions by 2050 report, which caused a stir last year with its recommendations that generators in advanced economies stop using unabated fossil fuels by 2035 among the steps the energy sector must take to limit global warming to 1.5 degrees Celsius.

But all 21 of the utilities assessed were found to fall short of meeting the IEA's expectations.

Ember said all but two utilities planned on operating fossil fuel power plants beyond 2035, including the utilities that are "most actively investing in wind and solar."

What's more, utilities are not pledging to divest from coal quickly enough. While all but two of the utilities have pledged to phase out use of coal-fired generation, only nine (43%) of the group had aligned with the IEA's deadline for a coal phase-out by 2030 for the EU and Organisation for Economic Cooperation and Development and 2040 elsewhere.

In a table of the utilities' coal emissions, the top emitter was Germany's RWE. It was followed Poland's PGE and ENEA; the Czech Republic's EPH; Bulgaria's ČEZ; and Finnish Fortum/Uniper.

Last year, RWE closed three of its 11 coal plants in Germany due to the country's pledge to phase out coal by 2038. RWE has also pledged to invest $57 billion in renewables, for example, 8 GW of offshore wind capacity.

Not just RWE, but also utilities around the world are using more coal to meet post-pandemic demand, particularly in China and India, despite international pledges to phase-down coal to protect the climate. 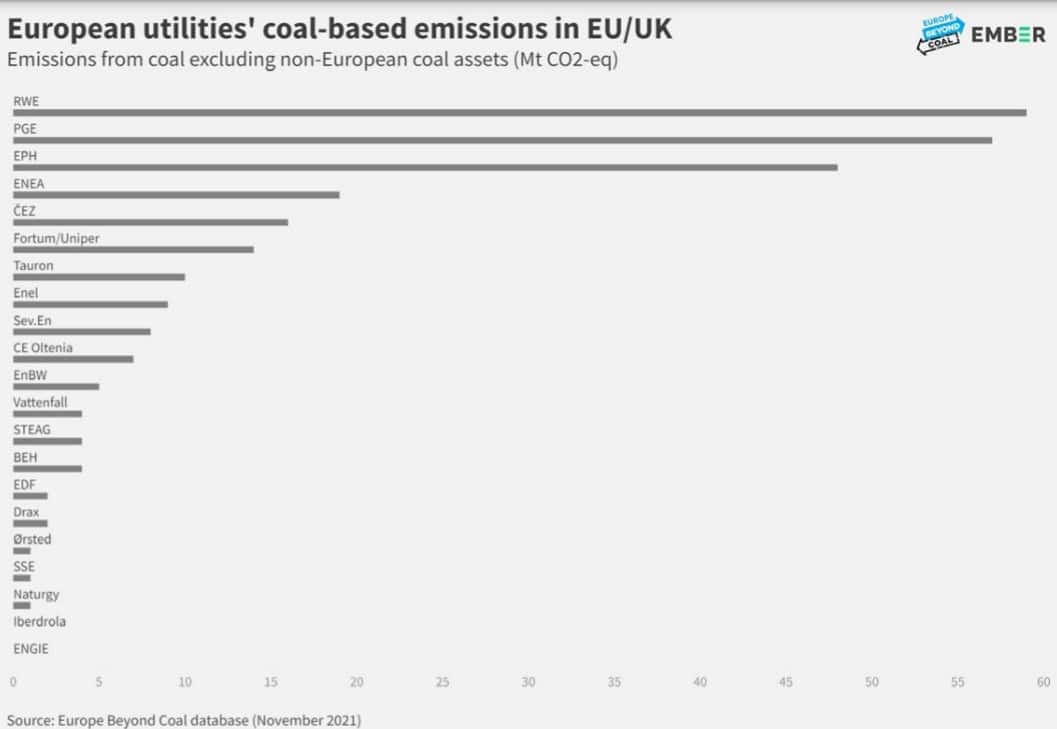 The report looked at heavyweights in the world of wind power development like RWE, the UK's SSE, Germany's Vattenfall, Denmark's Ørsted, as well as Spain's Iberdrola.

Quadrupling their wind and solar power capacity, the utilities together will expand their renewable energy capacity to 428 GW by 2030.

But the conclusion of the report is that utilities like RWE haven't invested enough. Its rapid renewables growth still fell short of the "minimum of six-fold growth" required in the IEA's scenarios, the report found.

The report's authors said that the companies set to meet the IEA's expectation of a 60% share of renewables by 2030 are SSE, Iberdrola, Italy's Enel, Poland's Tauron, and Vattenfall.

They suggested banks and other financial backers influence the companies to align with IEA benchmarks by requiring they meet technology-specific targets.

Hydrogen targets not set in stone

Some of the utilities already participate in hydrogen production projects that the EU says are needed to reach net zero.

But no utility assessed has set up binding timeframes for any of the proposed fossil gas-to-hydrogen plant conversions, according to the report. Also, they have not defined how they are preparing their gas-fired power plants to use hydrogen in the interim.

However, Vattenfall has converted a Dutch power plant to possibly burn a hydrogen blend, and SSE last week sought UK government funding for use of carbon capture and storage to decarbonize a gas-fired power plant.

The top five power generators using natural gas and fossil gases to generate power, as a proportion of their generation capacity, were Spain's Naturgy, the SSE, France's Engie, Fortum/Uniper, and RWE. 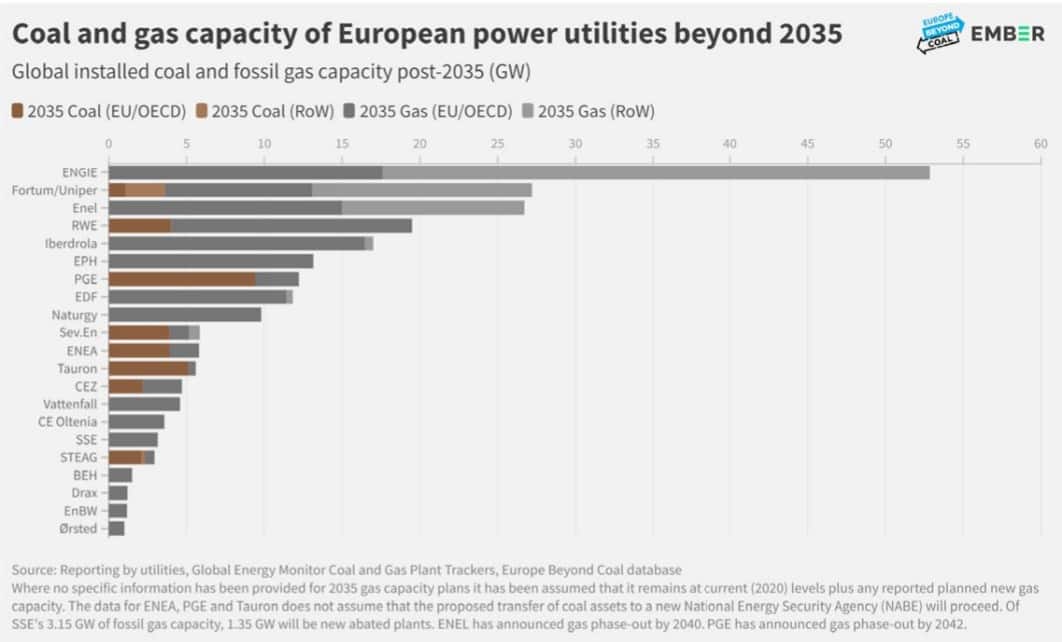 Table showing the intensity of natural gas and other fossil fuels in the fleets of selected European power utilities after 2035. Image source: Ember

The only two companies analyzed that had pledged to phase out natural gas are Italian-government-owned Enel and PGE, which pledged to stop burning natural gas by 2042 after increasing capacity by 2035.