Renewable generation capacity must soar ten-fold by 2050 to cap warming at 1.5 C: IRENA

The world's installed renewable power generation capacity must jump ten-fold by 2050 and energy transition investments will need to top previous expectations by more than 30% if there is to be any chance of limiting global warming to less than 1.5 degrees Celsius compared with pre-industrial levels, according to a study released this week.

Installed renewable power generation capacity will need to soar to more than 27,700 gigawatts (GW) in 2050 from over 2,500 GW currently, if the globe is to avoid the climate change consequences of a 1.5° C increase in temperatures, according to IRENA's calculations.

Under such a scenario, electricity would have a direct share of more than 50% of total final energy use (see graph below), compared with 21% currently, IRENA said. By 2050, some 90% of electricity would be supplied by renewables, it said. The remainder would be natural gas at 6% and nuclear at 4%, it said. At that point, total final energy consumption would be 348 exajoules (EJ), compared with 378 EJ currently. An exajoule is a quintillion joules. 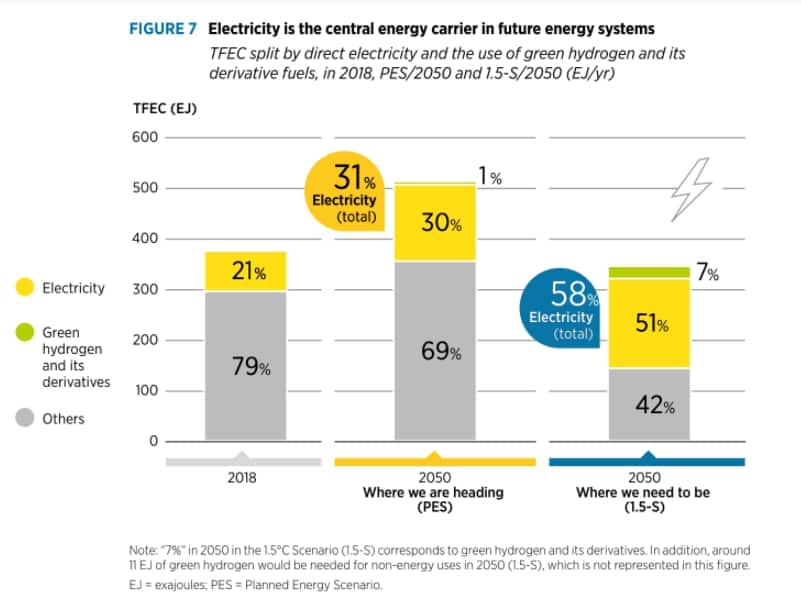 To reach such elevated renewable energy capacity and electrification levels would require more than 840 GW of renewable capacity additions every year, up from around 200 GW of newbuild in recent years.

And the share of renewable energy when it comes to primary energy supply would grow to 74% in 2050 from 14% in 2018. Attaining such a large slice of the pie would require an eight-fold increase in the annual growth rate of renewables' share from 0.25 percentage points in what IRENA terms "recent years" to 2 percentage points, it said.

Add another $33 trillion to the pot

To reach the generation and electrification figures the outlook says is warranted, some $131 trillion would need to be spent by 2050, an extra $33 trillion on top of what it says global planned investments are currently expected to total.

Over 80%, or $116 trillion, which equates to around $4 trillion/year, needs to be invested in energy transition technologies -- excluding fossil fuels and nuclear -- such as renewables, energy efficiency, end-use electrification, power grids, flexibility innovation (hydrogen), and carbon removal measures, it said.

The $4 trillion/year figure is approximately twice the rate of investment globally that is needed from 2021 through 2030 for the world to reach interim carbon reduction goals, several speakers told the CERAWeek by IHS Markit conference earlier this month.

By 2050, 30% of electricity use will be dedicated to green hydrogen production and hydrogen and its derivatives such as e-ammonia and e-methanol if climate disaster is to be avoided, according to the scenario. Hydrogen and its derivatives together will account for around 12% of total final energy use. To produce this, almost 5,000 GW of hydrogen electrolyzer capacity will be needed by 2050, up from just 0.3 GW currently.

Overall, electricity generation would nearly treble to 78,700 TWh in 2050 from 26,380 TWh in 2018 if the outlook's expected demand requirements come to fruition.

And in that case, wind and solar PV would dominate the power generation mix, supplying 63% of total electricity needs by 2050. Solar PV power installed capacity would reach over 14,000 GW and wind (onshore and offshore) over 8,100 GW by 2050 if the investment and construction IRENA sees as necessary happens. Hydropower, biomass, geothermal, concentrated solar power and ocean technologies account for the remaining renewable energy expansion, it said.

That growth would bring the expectations of International Energy Agency (IEA) Executive Director Fatih Birol to life. When releasing the agency's 2020 energy outlook, he said: "I see solar becoming the new king of the world's electricity markets. Based on today's policy settings, it is on track to set new records for deployment every year after 2022."

Meantime, fossil fuel production would decline by more than 75%, with total fossil fuel consumption continuously declining from 2021 onwards. Fossil fuels still have roles to play, mainly in power and to an extent in industry, providing 19% of the primary energy supply in 2050, according to the outlook. Oil and coal would decline the fastest, while natural gas use would peak around 2025 and decline thereafter. Under the plan to keep the increase in global temperatures to just 1.5° C, fossil fuel use would slump to 112 EJ from 487 EJ in 2018, with oil demand plummeting 85% over the period.

The 1.5° C scenario shows that cumulative investments of at least $24 trillion would be redirected from fossil fuels to energy transition technologies through 2050. In annual terms, an increase in energy sector investments to $4.4 trillion/year until 2050 would be needed from $1.8 trillion invested in 2019. That $4.4 trillion figure equates to nearly 5% of global estimated GDP, according to the report.

That difficult path to 2050 is one that is focusing minds across the energy industry, not just the renewable sector. The IEA plans to release a report in May titled "The World's Roadmap to Net Zero by 2050," laying out what it believes will be needed.

In January, when announcing the agency's intentions for the rest of 2021 and especially ahead of the 26th UN Climate Change Conference of the Parties (COP26) in November, Birol said: "The energy that powers our daily lives and our economies also produces three-quarters of global emissions. This means our climate challenge is essentially an energy challenge."

"Nothing short of a total transformation of our energy infrastructure will be required. That calls for decisive action this year, next year and indeed every year to 2050," Birol added.