The International Energy Agency (IEA) crowned solar power "king of electricity" in 2020, and IHS Markit expects global solar PV installations will increase by more than 20% year on year in 2022. The IEA, meantime, is predicting solar installations will top 1,100 GW between 2021 and 2026, accounting for almost 60% of all renewable capacity coming online in the period.

That's a lot of work, especially as panels get bigger and heavier. US-based generation owner and developer The AES Corporation (AES) wants to be at the forefront of those efforts, and it believes robotics are the next frontier in achieving aggressive US and global solar installation goals.

Net-Zero Business Daily sat down with AES Chief Product Officer and AES Next President Chris Shelton to discuss development of a new installation robot, Atlas, and the company's ambitions.

Net-Zero Business Daily: Could you describe the robot and what it does? 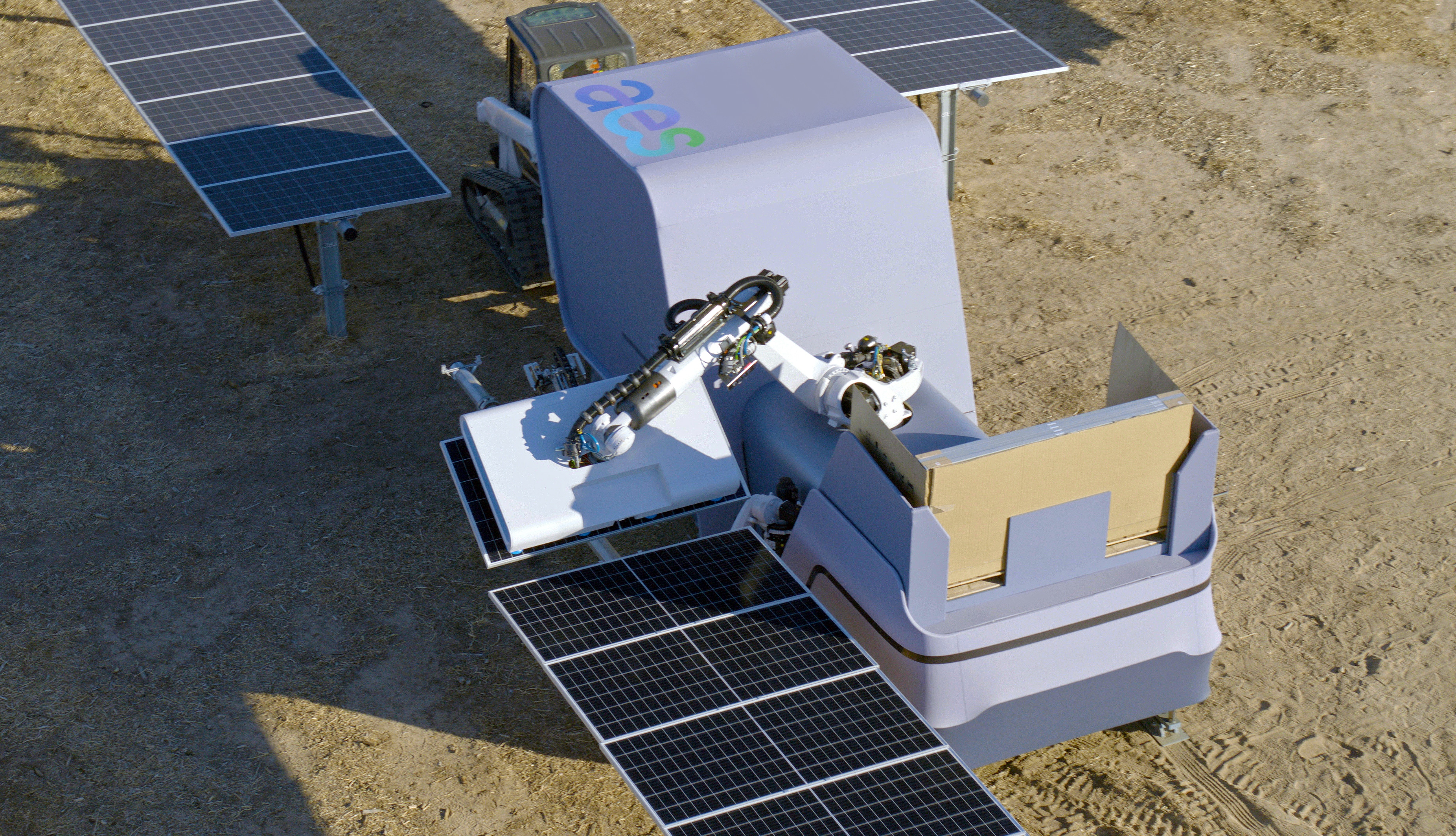 Net-Zero Business Daily: What led AES to develop this product?

Shelton: Since electricity is the main path to the clean energy transition, we recognize that it will rely on power generated by wind, solar, and battery storage. Solar is going to be the clean workhorse in this scenario.

Our view is that the transition to clean energy and the use of solar, wind, and batteries must be accelerated. There's no way that we're going to accomplish that net-zero goal and be consistent with the expectations on sectoral carbon reduction if we don't go faster than we currently are. So that's essentially the reasoning behind any of our innovations at the moment and the solutions we offer at AES.

Why specifically Atlas and why now? It essentially comes down to three main goals. We wanted our construction teams to reduce the repetitive work that can cause safety risks on the job. We wanted to have a solution that allowed us to install heavier panels and larger panels because we saw this evolution in the market, and we think this is very important to reducing levelized cost of electricity. The low-hanging fruit for the solar energy industry is to make these panels bigger, which in turn speeds up the time to commercial operation date. And if we can reduce the time from when we get commissioned on construction to when we are online, that allows us to recycle our capital faster and makes us more capital efficient.

If we go faster from construction to operation, our customers benefit as well. In a lot of cases, they want us online earlier. With Atlas, we can give them a more competitive offering.

Net-Zero Business Daily: You worked with Webster, New York-based Calvary Robotics. What problems did you face during development, and how did you overcome them?

Shelton: The elephant in the room has been COVID. We commissioned the Atlas project at the beginning of 2020 with Calvary Robotics, which does a lot of robotic industrial automation. We hired them to help us, not knowing that there would then be a near immediate shutdown in New York State. New York was the epicenter of the virus in back in 2020, as you remember. The state was the first to shut down and have strict COVID protocols. That made the initial development of Atlas a challenge … how to collaborate virtually. But the Calvary team and our development team did a great job. The Calvary team stayed safe and ran good process. That meant we could move forward and figure out how to develop this ground-breaking solution. We worked really well together given this unique set of challenges.

For the Cavalry team, one of the most interesting and most difficult aspects of the development was the artificial intelligence (AI) computer vision. People may say: why hasn't someone done this before? Well, there are a couple reasons. One is the type of computer vision used in Atlas didn't exist even four years ago as a commercially viable solution. This is truly a groundbreaking advance in AI. We were very excited to apply AI to the computer vision in this application, but there was a lot of work to be done. When you train these AI models, you have to do it with a number of different input sets to make sure that it gets more generally trained. The robot has to find the panel, pick up the panel, and then place the panel. It's doing all of that based on AI-enabled computer vision. Developing vision for the robot is a highly complex process, but essential to equipping the robot to respond to the changing environment in a field installation.

One of the other challenges is this is the first time an industrial robotic system like this one has been used in a field application. Robots like this are normally bolted to a concrete floor, so the team had to develop a micro grid system to run Atlas. It takes a lot of power so that the system runs on a battery that'll be charged from solar panels when it gets into broader deployment. In some of our field tests, we've charged the robot from the solar field that it's operating in. So, that was an exciting solution to the challenge of powering Atlas. This was not exactly rocket science, but it was definitely a challenge to put something together something like this.

Net-Zero Business Daily: That's very much a circular economy with a solar panel installation robot that runs on solar. Where is it being deployed so far?

Shelton: We've been in field testing in New York and California, and we're doing more of that type of proving ground testing in Ohio as well. We expect to see the first set of projects installed at AES facilities in California and Arizona. Desert environments are optimal to start with since they're flat, but as the Atlas robot evolves through different versions in the future, we move it into a broader set of locations.

Net-Zero Business Daily: Can you compare working in a desert environment with other locations?

Shelton: The desert environments we are working in are generally flat, which makes operations easier, even though they have other issues like they're dusty and rocky. The robot arm is rated now for those environments. Next, we'll solve for other terrains. But we had to solve for the hardest challenges first, like having a robot figure out where to place the panels. That is the dynamic vision challenge. This was the most difficult hurdle.

Figuring out how to get a vehicle on a hill and have it work is another step in Atlas's development. That didn't seem as challenging, so we didn't make that the first priority. We're working on the incline limitations next, but we don't see that as a huge hurdle.

Looking forward, we don't think we'll sell the Atlas system itself in the broader marketplace yet, and not before for a couple of more iterations. It might be a while before we partner with other companies to license it from us. But we have done that in the past with other technologies, and we're open to it, maybe by the end of 2023 or beginning of 2024.

Net-Zero Business Daily: AES is a generation developer, including in solar, and you've just got even bigger. In December, the company announced it was acquiring Community Energy Solar. How will the robot help your development pipeline with all these new projects you've acquired?

Shelton: That is a good point, and the Community Energy projects aren't the only ones. We've been growing the business through M&A, but not just by the acquisition of companies. And we're very excited about the Community Energy deal, but also at the project level, we're constantly growing our pipeline.

In 2021, we had a goal of signing 5,000 MW of projects or power purchase agreements. We're still doing the final assessment of where we ended up in 2021, but our goal was 5,000 MW and about 4,000 MW of that in the US. And about half of that pipeline is solar. So, the opportunity for improvement or acceleration is significant for solar, and AES is now among the largest developers of solar in the US and in the world.

That's why we're taking on something like Atlas. We're trying to accelerate the way solar is being deployed. As we grow, that economies of scale, the benefit of deploying technologies like Atlas, just make more and more sense.

Net-Zero Business Daily: Do you have plans to deploy the robot internationally, particularly with AES Chile?

Shelton: Atlas is still at an early stage. This is a first-of-its-kind breakthrough in multiple dimensions. We need to finish its full development before we use it at that next level of scale, but our expectation is that we will deploy it internationally in the near term. Atlas will be everywhere. Eventually, it will be deployed throughout our pipeline. Probably, the next place it would go would be Chile, after the US.

The pre-fabricated MAVERICK solution from 5B is betting on a view that panel prices will continue to decline because of the experience curve. But that may not happen in the next year. We've seen a lot of supply constraints from the re-opening after the initial COVID shutdowns. That will work itself out, and eventually we'll see that the experience curve driving the panel prices down. Many see panel prices going even lower, with most forecasts showing this happening by 2025.

MAVERICK could also address inflated labor costs, among other issues that drive up installation costs. If there's not enough labor in a region, you could still get solar built. It also addresses the issue of constraints on land availability around the best interconnections. Where there's densely populated areas and limited land, you still may want to try to build some solar closer to the load. So, having this ability to install solar in densely populated areas is a huge advantage, overcoming some constraints that we think are sometimes an issue in the developing solar market.

Net-Zero Business Daily: Are there any more technology developments coming from AES?

Shelton: Oh yes, lots more we're developing. We do innovation across all of our businesses. Obviously, we engage in continuous improvement, finding new customer solutions. The team I lead is called AES Next. And that's where the advances we're talking about today come from. It is the center of all the innovations at AES. This is where we think AES is unique. We are strong because of our combination of deep industry knowledge and our spirit of innovation. We have a deep understanding the complexity of a relatively conservative industry and what the sector's issues are. Then we combine that with an entrepreneurial spirit. Our strength from our perspective is figuring out how to combine those elements to become an innovative and dynamic company that is forward thinking.

Fluence is a good example of that. Our team at AES brought lithium-ion battery systems to the grid 13 years ago. We developed that in much the same way that we're developing Atlas. It was an internal team homegrown entrepreneurial team that developed the concept. We funded them, but they were entrepreneurial in spirit and grew the grid-scale battery storage idea. Today, that idea is now embodied in Fluence, a company that just went public and is now valued at about $4 billion.