Hydro-electric power plant construction sped up in 2021 compared with a year earlier, but still lagged the pace needed to meet climate goals by a wide margin, the International Hydropower Association (IHA) said in its annual state of the industry report.

The trade group suggested the easiest way to "supercharge" progress in the sector and on global climate goals was accelerating development of pumped storage hydropower (PSH) around the world.

At the moment, only China is showing the ambition required to build enough hydro generation capacity, and in particular, scale up its PSH capacity appropriately, the IHA said in its 2022 Hydropower Status Report.

China's mid-term and long-term plans for PSH development, published in September 2021 by the National Energy Administration, call for a total installed capacity of at least 62 GW by 2025 and 120 GW by 2030. The 2025 target is double the current Chinese PSH fleet's capacity.

Remarkably, China may sail right by the PSH targets to even greater installation figures, according to S&P Global analysts Choon Kiat William Chia and Bing Han. In a July report, the analysts said they expect China's PSH installed capacity to reach 67 GW by 2025 and 128 GW by 2030.

The first two generators at China's Fengning PSH facility began operation in December 2021. Once all 12 generators are operational in 2023, it will be the world's largest PSH facility, with a total installed capacity of 3.6 GW.

China's goals are baked into the National Development Reform Committee's 14th Five-Year Plan for renewables, published in June. The plan calls for aggressive enlargement of the country's renewable fleet and sees PSH as a means of accommodating the large-scale deployment of intermittent renewable energy.

The PSH pipeline in China—already home to a third of global hydropower capacity—is geographically diverse, but especially strong in provinces with excellent resources such as Hubei and Tibet or with large intermittent renewables like Qinghai and Xinjiang, Chia and Han say. Those four provinces account for around a third of the national total, they added.

It was much the same for the wider hydropower sector, the trade group said, with 2021 seeing 26 GW of capacity enter service, and 21 GW of that in China. 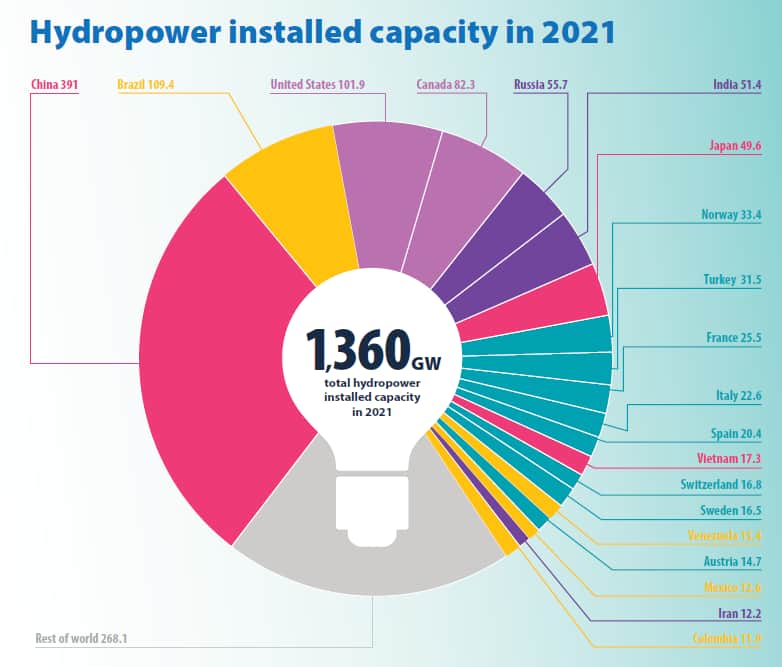 Outside of China, the pace of expansion must quicken, the IHA said. An average of 30 GW a year must be built to keep on track to the Paris Agreement's 2 degrees Celsius top-end target, the trade group said, and around 45 GW/year for the more ambitious net-zero target and 1.5 C increase in average global temperatures. Over the last five years, growth has averaged 22 GW/year, the trade group added, with more than half of this in China.

The International Energy Agency (IEA) agrees with this viewpoint on hydropower. In a September 2021 report, the Paris-based watchdog said the growth of global hydropower capacity is "set to slow significantly this decade," which it said was putting at risk the ambitions of countries across the globe to reach net-zero emissions.

Hydropower, the IEA argued, has a key role in the energy transition through not only the amount of low-carbon electricity it produces, but also because of its "unmatched capabilities for providing flexibility and storage."

Global hydropower capacity is expected to increase by 17% between 2021 and 2030, the IEA said in its Hydropower Special Market Report, but that growth rate is 23% slower than the previous decade's.

Flexibility is a particular concern in Africa, the IEA added in a June report, on a path to universal access to clean energy by 2030 that would rely heavily on solar PV deployment. In its Africa Energy Outlook 2022 report, the IEA laid out a scenario that would provide 90 million people a year with reliable electricity supply for the first time, and supporting the solar facilities powering this push would be 40 GW of new hydropower, which would double the continent's current capacity.

IHA data shows a pipeline of projects equating to 110 GW, but it warned only 14 GW is currently under construction.

Storage will be key to meeting the world's climate goals, observers say. As the International Forum on Pumped Storage Hydropower (IFPSH) noted on 16 September 2021 when unveiling a report: "Without adequate storage, there is a very real risk that electricity grids of the future will not be able to provide reliable power without recourse to high-carbon sources of back-up such as gas turbines." The report was commissioned upon the organization's founding in November 2020.

The forum was formed by 11 countries—Austria, Brazil, Estonia, Greece, India, Indonesia, Israel, Morocco, Norway, Switzerland, and the US—alongside the IHA.

The penultimate country in that list saw a boost to its hydropower and PSH capacity on 1 July when the 900-MW Nant de Drance PSH facility entered service. The plant took 14 years to build, according to lead developer Alpiq. The Swiss utility likened the scale and difficulty of construction and engineering to that of the first PSH plants. The first PSH plants in the world came online in the 1890s in Switzerland and Italy.

Meanwhile, the US—a driving force in the IFPSH's creation and the second largest producer of hydropower globally—is struggling with an aging fleet and a tricky licensing path at the same time as the Biden administration seeks to set the country on the road to a carbon-free electricity generation sector by 2035.

Hydropower in 2020 supplied 7.3% of the US' electricity, or 291 billion kWh. This was, by far, the largest source of renewable power in the nation, according to the US Energy Information Administration, representing 52% of the total.

But, according to a study by the Association of State Dam Safety Officials (ASDSO) in 2019, the average age of the 90,000 dams in the US is nearly 60 years. In addition, more than 30% of US hydropower licenses will expire by 2030 and facilities in the Western US face elongated droughts due to climate change.

As a result, conservation organizations, hydropower industry groups, and tribes on 4 April proposed a package to Congress and the White House to improve hydropower licensing, relicensing, and license surrender processes.

The package proposes amendments to the Federal Power Act to "enhance cooperation, improve clarity, restore autonomy and self-determination for Tribal Nations, and retain states' decision-making authority." In doing so, the package would help address climate change, better protect the health of the nation's rivers, and provide tribes long-sought authority over their lands and waters, the groups said.

Much of that is potential run-of-river capacity, but in May, the National Renewable Energy Laboratory mapped out the closed-loop PSH opportunities the US is missing out on. Noting that no large greenfield PSH facilities have been built in the US since the 1990s, NREL identified 11,769 opportunities in the contiguous US.