Plug Power announced a plan 20 September for what it says will be the largest green hydrogen production facility on the US West Coast, to be built in Fresno County, California.

The facility will have a production capacity of 30 metric tons/day (mt/day) of liquid green hydrogen, provided through a new 300-MW solar farm that will deliver 120 MW of power to Plug Power's electrolyzers, according to the company's announcement. Pending environmental and construction permitting approvals, the plant will break ground in early 2023 and complete commissioning in early 2024, Plug Power said.

In previous announcements, the company said it intends to build plants in New York, Tennessee, and Georgia. Combined, the facilities will have a total production capacity of 500 mt/day by 2025.

"When fully built, the network of plants in the US will offer transportation fuel to customers that is price-competitive with diesel. Plug Power's investment in green hydrogen production will contribute to decarbonizing light-duty vehicles, freight transportation, and logistics operations, and supports California's leading role in developing hydrogen as a zero-emission fuel," the company said in a statement.

Plug Power already has a joint venture with Renault Group for commercial vehicles in France, known as HYVIA. The partners said in June that they will offer "turnkey hydrogen mobility solutions" for light commercial vehicles with fuel cells, hydrogen charging stations, supply of carbon-free hydrogen, maintenance, and fleet management.

Unlike fossil fuel companies engaged in the hydrogen business, Plug Power is focusing exclusively on green hydrogen: that is, hydrogen produced through the electrolysis of water with electricity generated from zero-carbon sources. For other companies, steam reforming of natural gas creates the end product, and the carbon emissions are captured (blue hydrogen) or not captured (gray hydrogen).

In the transition period while the company's plants are being completed, Plug Power is purchasing hydrogen as well.

If Plug Power reaches its 500 mt/day goal in 2025, it would be producing about 2% of today's US output of about 25,000 mt/day, said Alex Klaessig, IHS Markit research and analysis director, global gas. And while that's not an insignificant share, Klaessig said that production isn't the only aspect of Plug Power to watch.

"Plug Power isn't providing hydrogen in the same commodity feedstock manner [as traditional fossil fuel producers]," he explained in an email. "It's active along almost the entire hydrogen value chain, from creating H2 using their PEM electrolyzers, to delivering and dispensing hydrogen that is then consumed in their PEM fuel cell for trucks and forklifts and other applications. Plug perceives its role is to make hydrogen easy for those customers. So, it's a different value proposition."

Global and US growth

Forecasts of demand for hydrogen demand vary widely, but all point to a sharp upward gain in the 2020s. Production is nearly 90 million mt/year currently, but will more than double to 200 million mt in 2030, according to analysis by the International Energy Agency (IEA) in a report issued earlier this year on pathways to global net-zero emissions by 2050. Hydrogen production could reach 528 million mt/year by 2050, more than three-quarters of it green hydrogen, IEA said. 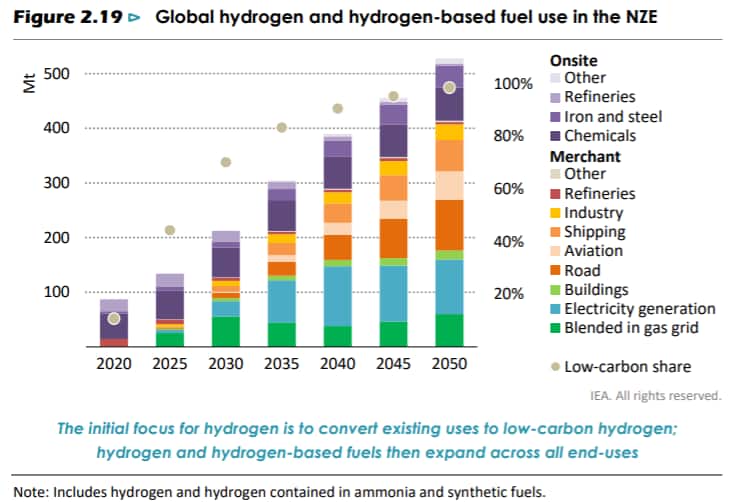 Industrial uses will be the biggest driver of growth, as hydrogen offers an option for reducing the carbon footprint of energy-intensive processes such as making steel and cement. But IHS Markit says that by the middle of the decade, hydrogen will be making inroads into the transportation market as well, as it projects more than 5 million hydrogen fuel cell vehicles on the road by 2030.

Supporting those non-industrial uses is the intention of Plug Power, which announced initiatives aimed at the aviation industry earlier this summer, and now has set its sights on a wider variety of opportunities in California.

"Plug Power has a long-standing commitment to fuel cell technology. With this project, they are taking an innovative, sustainable, and low-impact approach to provide instate renewable hydrogen," said California Air Resources Board Executive Officer Richard Corey in a statement on 20 September.

"This will help support the state's target of carbon neutrality by 2045 or sooner, and continue to transition the transportation sector out of petroleum, including trucks that carry freight and cargo. That will benefit our most impacted communities including those located near ports, rail yards, and distribution centers," he said.

Focusing on industrial ports is one of the recommendations that the IEA has made about how to incorporate clean hydrogen into the energy mix. "Encouraging [fossil fuel] plants to shift to cleaner hydrogen production would drive down overall costs. These large sources of hydrogen supply can also fuel ships and trucks serving the ports and power other nearby industrial facilities like steel plants," the IEA said in a report in 2019.

California represents excellent opportunities for such initiatives, said Andy Marsh, CEO of Plug Power. "California is leading the world in the adoption of green hydrogen and renewable energy. Plug Power is proud to be a part of that transition and to support the state's continued leadership," he said.