The company is now eyeing the skies to demonstrate that renewable energy-sourced, green hydrogen produced at its own facilities can be used safely and cleanly in fuel cells to power the two propellers of regional airplanes.

Compared with kerosene, a petroleum product currently used in regional turboprop planes, fuel cells are cleaner because they generate power through an electrochemical reaction rather than combustion. When powered with hydrogen, their only exhaust is water rather than CO2 and other pollutants.

The goal of both Plug Power and Universal Hydrogen is to test this retrofitted engine in either a de Havilland Canada Dash 8-300 or an ATR 42 aircraft that can carry between 40-60 passengers up to about 700 miles. The ATR 42 is made by a joint venture between Airbus and Leonardo, Avoins Transports Regionales.

A successful demonstration in 2023 and a commercial flight in 2025 will bring Plug Power CEO Andy Marsh closer to his vision of supplanting carbon-intensive applications with clean, green hydrogen-powered substitutes. But that's not where his ambitions end.

Marsh told investors during a 21 June call that he not only wants airplanes to be run on Plug Power fuel cells but also wants the vans, off-road forklifts, and other ground-support equipment plying the airports to be similarly powered.

"I think there's large opportunities across the board to decarbonize our airports," Marsh told investors.

The company has already made inroads in powering forklifts with its hydrogen fuel cell technology, and it's moving into data centers and light-duty commercial vans. It sees additional near-term opportunities in France, Germany, and South Korea, Marsh said.

Marsh is convinced that hydrogen will be "a most significant player" in the aviation sector, which was responsible for nearly 1 gigaton, or 2.8%, of global GHG emissions in 2019, according to the International Energy Agency.

For "very, very short distances," battery-powered aircraft will work, but hydrogen will be the choice of fuel for regional aircraft and translantic ones in a decarbonized economy, Marsh said.

"I think [hydrogen] will grow gradually between 2025 and 2035. And then I think by 2035, it may start having certainly a dominant position for all new planes coming off the line," Marsh added.

Some analysts like Portland, Oregon-based Allied Market Research (AMR) are optimistic about the prospects for hydrogen-fueled aircraft.

Hydrogen-fueled aircraft are expected to account for 94% of the global zero-emission aircraft market of about $29.24 billion in 2030, AMR wrote in a 12 July report. The research group says the global market could reach nearly $192 billion by 2040.

"This is attributed to its high suitability as an aviation fuel," AMR wrote. Solar-powered aircraft will be a major alternative zero-emissions technology, it said.

"We've seen a number of original equipment manufacturers getting into this space, with Europe's Sustainable Aviation Fuel targets and California's goals being near-term drivers," he added.

AMR said technological challenges associated with solar, electric, and hydrogen-powered aircraft, as well as high costs associated with the production and handling of hydrogen are the factors that are expected to restrain the growth of the zero-emission aircraft market during the forecast period.

To date, the International Civil Aviation Authority (ICAO) said, several factors still hinder the potential for use of hydrogen in commercial ﬂights, such as on-board storage, safety concerns, the high cost of producing the fuel, and the need for dedicated infrastructure at airports.

To be carbon-neutral though, the hydrogen used in aircraft must be produced with renewable energy, which is the goal Plug Power, ZeroAvia, plus established aircraft manufacturers such as Airbus, are striving for.

However, Universal Hydrogen believes it has found a solution not only for using renewable hydrogen but also for transporting it in the form of easily movable modular capsules or pods. 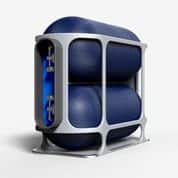 "We have designed a retrofit package for existing regional aircraft that replaces kerosene-burning engines with an integrated package. This will enable the longest-range, zero-carbon aircraft to be in service by 2025," Jason Chua, Universal Hydrogen co-founder and chief strategy & product officer, told Net-Zero Business Daily.

The retrofit package, or the conversion kit, consists of a redesigned powertrain for regional aircraft capable of using Plug Power fuel cells as well as the modular pods to store liquid hydrogen that Universal Hydrogen has designed so they can be stored at the back of a plane or removed for transportation for reprocessing and reuse. These capsules are connected to the fuel cells via piping. 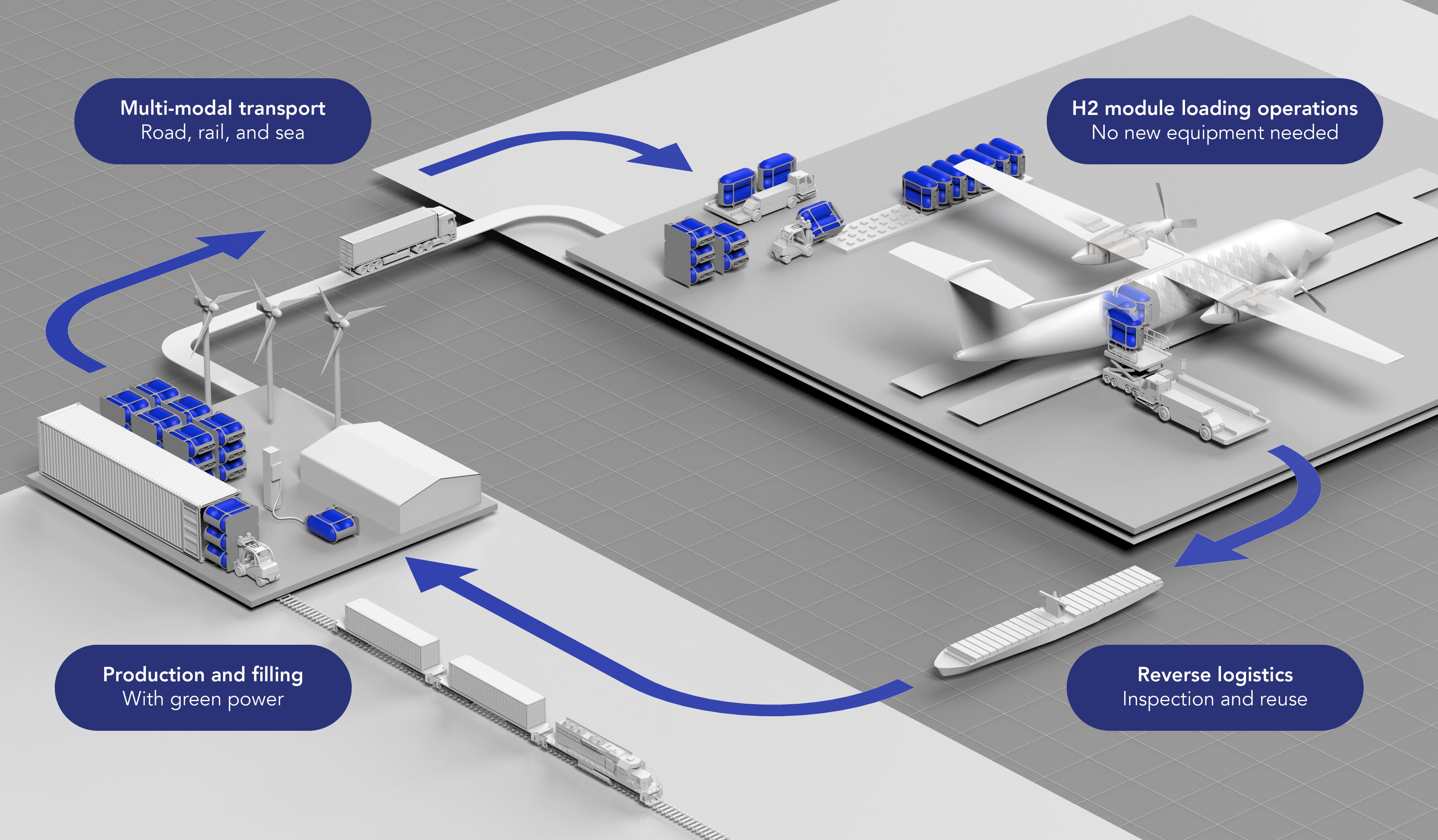 To date, Universal Hydrogen and Plug Power say they have tested a sub-scale version of the redesigned powertrain on land using a 30-kW Plug Power fuel cell for the purpose. And Chua said the company is in the process of testing progressively scalable powertrains between now and 2025 while it gathers relevant test data to confirm technical and economic viability and secures various regulatory approvals and certifications.

By September, Plug Power plans to deliver 14 125-kW fuel cells to Universal Hydrogen, which will then incorporate them into a 2-MW powertrain prototype for ground testing and demonstration this year and next.

Universal Hydrogen has already started signing letters of intent with airlines in Europe and the US that want to reduce their carbon footprint.

Air Nostrum said it would purchase 11, while Ravn's commitment extends to five such kits.

Icelandair, unlike Air Nostrum and Ravn Alaska, has not committed to purchasing a specific number of conversion kits for its domestic fleet. Rather, the airline said its letter of intent marks the "the first step of an ambitious multilateral initiative," which requires working with Icelandic hydrogen producers, transportation companies, and airports to create a green hydrogen value chain.

According to Universal Hydrogen, the letter of intent does not specify whether Icelandair will source its green hydrogen using hydropower or geothermal, but that is part of the initiative.

Iceland generated 19 billion kWh of power in 2019, of which 68.4% came from hydropower facilities, and the rest mostly from geothermal sources, according to the US Energy Information Administration.

Competition is in the air

Plug Power and Universal Hydrogen are not the only companies that are trying to commercialize hydrogen-fueled technology for aircraft.

Another US company, ZeroAvia is expecting to debut a 19-seat passenger plane powered by hydrogen fuel cells mounted in a 600-kw powertrain as early as 2023, and has raised $37.7 million for the project. This comprises $16.3 million from the UK government and about $21.4 million from a host of backers including Bill Gates' Breakthrough Energy Ventures, Amazon Climate Pledge, and Shell Ventures.

ZeroAvia's demonstration project, which involves a partnership with British Airways, will be part of HyFlyer II, the second ZeroAvia-led project backed by the UK.

The company already is credited with demonstrating the world's first hydrogen fuel cell-powered flight of a commercial six-seater Piper Malibu airplane at Cranfield airport in the UK in September 2020.

Meanwhile, industry behemoth Airbus is eyeing hydrogen to fuel commercial trans-Atlantic flights by 2035. It already has unveiled three concepts for its ZEROe aircraft that would be powered by a combination of hydrogen-powered fuel cells and combustion engines that burn hydrogen gas.

The French aircraft manufacturer also recognizes that decarbonizing the aviation sector will require a change in how airports, aircraft, and related equipment are designed if their traditional reliance on fossil fuels is to decrease.

An airport right now requires ground transportation to shuttle passengers to and from aircraft, aircraft tugs, and cargo trucks, and fuel is needed to cool and heat the buildings. Traditionally, these vehicles and buildings have consumed fossil fuels, but Airbus said the use of renewable electricity-derived hydrogen can reduce the "15-20 megatons of CO2" that are emitted each year from airports.

"Airports have a key role to enable the transition to a climate-neutral air transport ecosystem," Lionel Cousseins, ZEROe market development and airlines relations manager, said on the company's website.

To achieve its goal of adopting hydrogen by 2035, Airbus launched a Hydrogen Hub at Airports initiative in 2020 that enables it to collaborate with airlines to study how this transition can occur.

Airbus has signed memoranda of agreements with SAS Scandinavian Airlines and easyjet to assess airport infrastructure needs for accommodating electric, hydrogen, and hybrid aircraft in the future. Both studies are due out by the year's end. It also is working in partnership with ADP and Air Liquide to better understand hydrogen infrastructure needs at Paris Charles-de-Gaulle Airport and Paris Orly Airport.

The PtL product is an e-fuel, or a fuel generated exclusively via renewables, that will be made from CO2 captured from nearby industrial sources and hydrogen sourced from renewables.

SAF+ is a group of Quebec companies working in the field of sustainable fuel production involving carbon capture and using green hydrogen produced in Quebec. The goal of the consortium, which includes Air Transat and Aéroports de Montréal, is to produce an aviation fuel that has an 80% lower carbon footprint than conventional jet fuel. Hydro-Québec, which is the largest producer and distributor of hydropower in North America, has joined the consortium as an observer.

Hydro-Québec is already responsible for providing 99% of the renewable power for Air Liquide's electrolyzer facility in Bécancour, Quebec, which generates about 20 MW of power from splitting water molecules, while producing 8.2 mt/day of hydrogen.

Hydropower also will be the renewable electricity source for two of Plug Power's green hydrogen plants. Having access to a steady supply of green hydrogen is critical for decarbonization, Marsh told Net-Zero Business Daily in June, and the ICAO agrees.

According to the ICAO, substituting jet fuel with electricity and hydrogen can have "a notable impact" on the carbon footprint of aviation. "However, it is important to note that such CO2 benefits need to be considered on a lifecycle basis, and will only occur if the electric energy or hydrogen is obtained from lower carbon sources," it said.

In February, Plug Power announced it would construct a production facility in Latham that would be able to produce 45 mt/day of green liquid hydrogen using electrolyzers fueled by hydropower.

The company also plans to generate 10 mt/day of green hydrogen in Pennsylvania with Brookfield Renewables using hydropower, and on 15 July it announced a 345-MW wind power purchase agreement with Virginia-based Apex Clean Energy for a green hydrogen production facility that will be built next to a wind farm at a location yet to be determined.

"The [wind] plant will be co-located, and we anticipate the [green hydrogen] plant to be in production by an end of 2022-early 2023 time frame," Plug Power spokesman Roberto Friedlander, told Net-Zero Business Daily 22 July.

By the end of the year, Plug Power expects to produce 120 mt/day of green hydrogen. In the meantime, the company is negotiating with various hydrogen producing companies to meet the burgeoning needs for its clients that its own production has not been able to meet, according to Marsh.

Where securing additional hydrogen for new capacity is concerned, Frielander said "we are negotatiating this as we speak."

He noted that Linde has just brought a 35 mt/day plant online in La Porte, Texas, while Air Liquide is also planning to bring its 30 mt/day online in Nevada.

Plug Power's goal is to have 500 mt/day of green hydrogen in production by 2025 when the regional planes equipped with the company's fuel cells enter service.

IHS Markit is excited to share our first-ever diversity report, which showcases the work we’ve done to drive DEI in… https://t.co/YdsBx0Atvr

This recognition reaffirms our commitment to creating an inclusive workplace where everyone feels valued and apprec… https://t.co/pb1thbNdFT

IHS Markit is honored to be named as one of the Best Places to Work for LGBTQ+ Equality in @HRC Foundation's Corpor… https://t.co/BLRU14Hary

[2/2] Formed through representation from our global affinity networks, each of our regions, and key business areas,… https://t.co/0rkUi3Vqx4