Despite the formidable challenges posed by the energy transition and path to carbon neutrality in 2050 in the Philippines, the outlook remains positive, said Federico Lopez, CEO of First Philippine Holdings (FPH), a management and investment company whose primary business is power generation and distribution.

There are three reasons for Lopez's optimism—first, the considerable reduction in the cost of renewable energy battery storage in the last decade. Energy Development Corporation (EDC), another FPH company managed by First Gen, has been responsible for making the Philippines the third-largest geothermal power producer in the world. EDC searches for indigenous, low-carbon energy alternatives and is working on reducing the cost of geothermal power, he said.

"As renewable energy and battery storage costs drop further in the coming years, the penetration into our grids, rooftops, and our lives will increase. That's a welcome development. However, if we want to encourage a deeper penetration of deep decarbonization, we must effectively plan for the intermittency issues that [will] arise with renewable energy," he said.

As more renewables come on to the grid, the shape of the demand curve changes; it changes seasonally, daily and even peaks are shaped and electricity demand is curtailed to a certain extent in what Lopez described as the "Duck Curve Phenomenon." This is experienced by electric utilities when renewables penetrate their service territories and was first identified by the California Independent System Operator, a power grid operator, in 2013.

"It has been borne out through the years. It's a real issue to prepare for as we decarbonize the grid," he said.

The graph below, prepared by the International Energy Agency, shows the California Duck Curve of a typical day in 2017 and 2019. 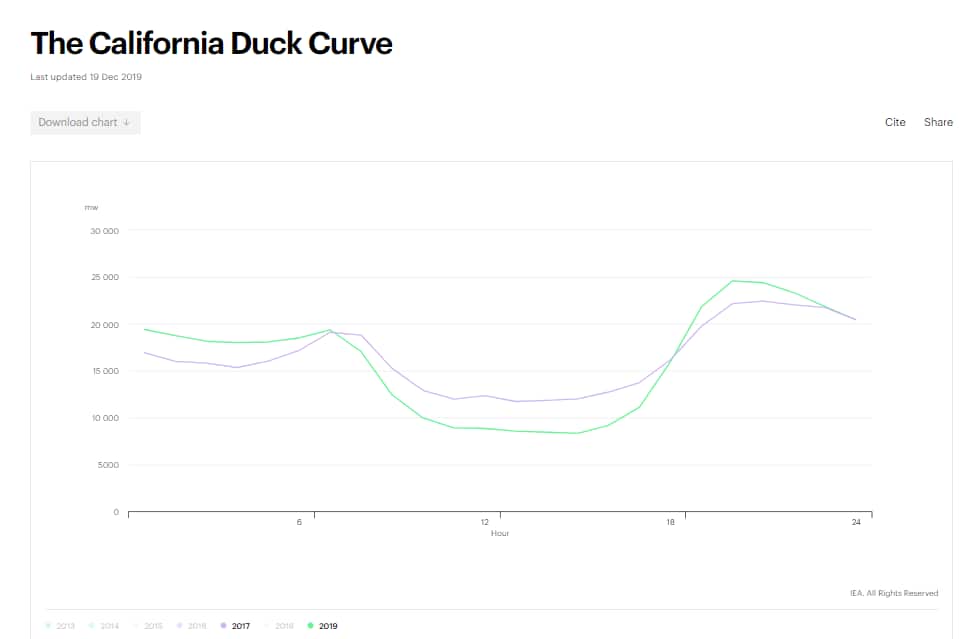 In a presentation during a webinar on the need for businesses in the Philippines to move towards lower carbon emissions, held on 27 January, Lopez explained why the "belly of the duck" increased in the Philippines during the period from 2011 to 2019. That was a period, he said, when increasingly more renewable energy was added to the grid and on roof-tops of individual homes and businesses.

"[It is] not because people are using less electricity in their homes, but because they are using less from the grid during daylight hours and/or grid-scale solar is generating more…. In this case, you are seeing [a production ramp up of] something like 10,000 megawatts in a short span of three hours. And that's in a world where you don't have batteries fully backing up the solar panels. This is a phenomenon that utilities must learn to deal with as small intermittent renewable energy use gains momentum," he said.

But as storage batteries get cheaper and more ubiquitous, the dynamic will alter yet again, especially if some households defect partially or totally from the electricity grid, Lopez said. He predicted the installation of solar photovoltaic systems (PVs) and storage batteries would gain momentum and eventually become "unstoppable" as the economics improved in the coming years, but warned that the power grid will be more challenging to manage in the interim.

The host of solutions to the issues that intermittency and seasonality bring to a grid that will maximize the use of renewable energy is the second reason for Lopez's optimism. These technical solutions include flexible baseload plants like geothermal power and combined-cycle gas turbines—both of which are capable of operating 24/7 and offer flexibility to counter renewable energy intermittency. Such flexibility is particularly useful in the Philippines, which is prone to rain, cloud cover, and where the wind does not always blow.

Other solutions include fast-acting, simple-cycle gas-fired turbines that can operate within minutes of starting up; pumped storage hydro; putting battery storage in key areas of the grid, homes, and establishments behind the meter; building a transmission network that expands the geographic coverage of wind and solar to smoothen the viability of the sun and wind over wider areas; and ice storage that complements air conditioning system, compressed air storage, and flywheel storage devices.

Tools such as time of use, pricing, and demand response programs are also solutions that can be leveraged to deal with intermittency issues, according to Lopez. The proliferation of Internet of Things sensors and artificial intelligence have further improved energy efficiency programs.

Eventually, a carbon-free, hydrogen economy could play a role in the process, Lopez said, particularly in light of how hydrogen can eventually repower combined-cycle gas turbine and simple cycle turbines even before carbon neutrality is achieved in 2050.

"It can also augment the battery storage and complement [renewable energy] very well. It replaces petroleum for use in the transport sector where portability and mobility are necessary. Just keep in mind that there are many technically and economically feasible ways of handling the intermittency issues of renewable energy. However, progressive power grid operators and utilities must deliberately plan for them and incorporate them into their day-to-day operations," he said.

Making the timely move to LNG

The other element of the approach in the Philippines is to substitute gas for coal, which offers a reduction of about 40% in the carbon dioxide-equivalent for power production. This includes increasing imports of LNG.

"We should plan likewise for the eventual phase out of existing coal plants and even review the need for those already in the pipeline but have not yet been built," Lopez said. "This will spare the industry from stranded assets that result from the inevitable shift that is coming and is coming fast. More importantly, it will steer us and the rest in the Philippine power industry dramatically toward a direction that smoothens our transition to a decarbonized future, and one more in tune with the needs of the 21st century."

FPH crystalized its role in the transition to a decarbonized energy system last year, following months of protracted internal debate and deliberation. The company anticipates it will have to deal with many of the adaptive challenges, which will require "reimagining and redesigning the country's infrastructure and way of life for a changed world - one that is decarbonized, resilient and even socially inclusive," Lopez said.

"In a nutshell, it's all about realigning our corporate profit engine toward solving the world's greatest problems," he said.