On 27 October, the Philippines announced a moratorium on new coal-fired power plants, building on a policy announced in May 2020 to expand the use of renewables for both environmental and reliability purposes.

The announcement was made by Energy Secretary Alfonso G. Cusi during a speech at the 2nd Global Ministerial Conference on System Integration of Renewables, which was held as part of Singapore International Energy Week 2020.

"This will help build a more sustainable power system that will be resilient in the face of structural changes in demand and will be flexible enough to accommodate the entry of new, cleaner, and indigenous technological innovations," the Energy Agency said in transcript of Corsi's remarks.

To facilitate the energy transition away from coal, the Philippines announced on the same day that it will now allow 100% foreign ownership in large-scale ($US50 million or more) geothermal exploration, development and utilization projects.

Another part of the transition was the Open and Competitive Selection Process (OCSP3) for renewable energy service contracts, which was held on 20 October. "From an investment perspective, OCSP3 allows for 100% foreign ownership in large-scale geothermal exploration, development, and utilization projects," Corsi said.

Coal-fired power represented 41.5% of the nation's power in June 2020, according to the Philippines Department of Energy (DOE), and oil and natural gas contributed another 29%. Renewables, mostly hydropower, contributed less than 30%. But solar in particular could surge beyond 35% of the power mix by 2030, Corsi said.

Already, the figures represent the highest renewable energy share among countries within the Association of Southeast Asian Nations (ASEAN) region, he said. "Despite this, I am determined to accelerate the development of our country's indigenous resources. We are also pushing for the transition from fossil fuel-based technology utilization to cleaner energy sources to ensure more sustainable growth for the country," Corsi said. 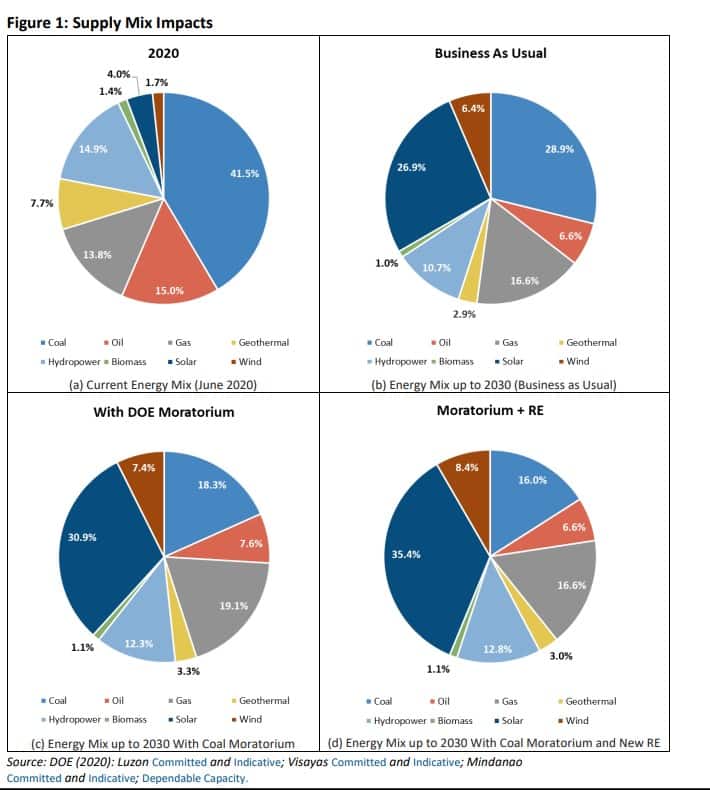 The Institute for Energy and Financial Analysis (IEEFA), a US-based analysis firm, said that about 10 GW of coal-fired power plants have been proposed and would, presumably, not receive permits under the new rules.

"This announcement is the end-result of an urgent policy review which began at the start of the year and addresses power market problems that were exacerbated by the pandemic. It also comes as Super Typhoon Rolly delivers a firm reminder about the importance of flexible grids and decentralized modular renewable energy generation for both lower prices and improved power sector resilience," IEEFA said on 28 October.

In May 2020, coal-fired power accounted for 60% of the energy outages in the country, according to DOE.

"The DOE decision marks a clear break with past policies and comes as the Philippines prioritizes the need for more flexible and lower cost alternatives to thermal power baseload," IEEFA said. "The Department of Finance's leadership continues to make clear the aim to shift investors to clean energy resources and green technologies. They have also indicated their determination to make economic development more inclusive and communities more resilient."

IEEFA also predicted that the shift to renewables will reduce prices in the Philippines, as the nation currently has higher costs than most of its ASEAN peers, but new, more efficient energy production could close that gap.