Unlike most countries where photovoltaic (PV) solar is on the rise, Italy's growth in recent years has been driven by smaller units placed on individual homes and businesses, rather than utility-scale installations.

This trend will continue through at least this year and probably 2022, according to Josefin Berg, research and analysis manager, energy and power, with IHS Markit. Residential as well as small and medium commercial facilities of less than 1 MW represented over 55% of the Italian PV market this year, she wrote in a report published on 6 August.

In all, IHS Markit forecasts 1 GW of PV installations in 2021, and a steady increase to nearly 3.5 GW annually by 2025 in Italy, while permitting problems that have besieged many utility-scale projects are resolved. 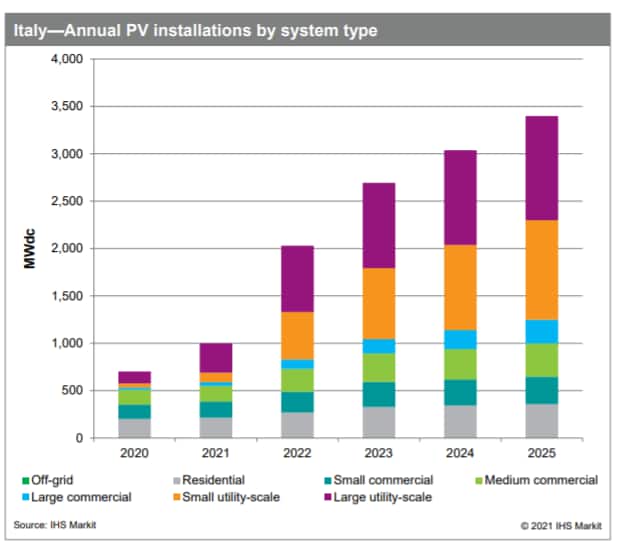 The country has a target of 55% of its power coming from renewables by 2030, up from about 31% currently; that mix includes hydropower, PV, and wind, and with an additional 9% coming from combusted biomass). Natural gas contributes about 45% of the annual power generation.

Solar has slumbered in Italy since 2014, after a few years at the start of the decade in which it was one of the most active markets in the world. For example, the 6.7 GW installed in 2011 was the world's second-highest figure that year.

The incentives that drove growth in the early 2010s—such as guaranteed minimum payments for all plants of 1 MW or greater—were phased out in 2014. New installations have never topped 1 GW in a single year since then, according to Berg.

Now the country faces two tasks: incentivizing new installations, and revamping or repowering older units that are not operating effectively.

"The low quality of many PV plants that have been installed in the 2010-12 boom years has led to a strong demand for revamping and repowering," Berg explained. Generally speaking, revamping involves the replacement of components with new, more efficient ones, while maintaining the rated power of the system; repowering is an upgrade to the potential output of the facility, without changing its boundaries.

For new installations, different forms of incentives are driving different market sectors. On the residential end, a temporary income tax rebate worth 110% of the cost of installation, up to €2,400/kW (about $2,822) for PV systems and €1,000/kWh for storage systems, is available. This was created under Italy's €55-billion ($64.7 billion) stimulus package that went into effect in May 2020 for COVID-19 economic recovery, and the incentives have been extended to projects installed through the end of 2022.

In the small and medium commercial segment, the Decreto FER 1 program is the driver. Created by the EU in August 2019, FER 1 provided €5.4 billion ($6.4 billion) in financing for renewable energy, including for PV systems of at least 20 kW, which can be either newbuilds or extensions of existing installations.

FER 1 has been effective on the small scale, but it has not been successful at driving interest in power auctions for projects over 1 MW, according to Berg. Italy has set a goal of 5.5 GW of combined new PV and wind capacity at utility scale for 2019-2021. "PV participation in FER tenders has been extremely low. In the first five rounds of the tenders, 208 MW of PV projects have been assigned, representing only 4.6% of the capacity available," Berg wrote.

The challenge for larger-scale projects has been permitting and authorization. The government has responded with a pair of "simplification decrees," one in 2020 and one in 2021, that have opened up formerly ineligible sites, such as properties of national interest and agricultural land. The decrees also mandated speedier environmental reviews.

"From 2022 onward, IHS Markit assumes that the authorization issues in the Italian PV market will ease. This will unfreeze a significantly large pipeline of greater than 1 MW projects, allowing the market to hit national renewable energy targets," Berg wrote.