The EU may not be able to reach its 2030 climate goal despite record investment in new offshore and onshore wind capacity across the continent in 2020, according to a WindEurope report.

If the problem with permitting remains unaddressed, the advocacy group warned wind energy may not be able to its part on delivering on the EU's 2030 target of reducing GHG emissions by 55%.

Some project delays were encountered, but "clearly they were not substantial," Brindley added during a 14 April webinar on the report. 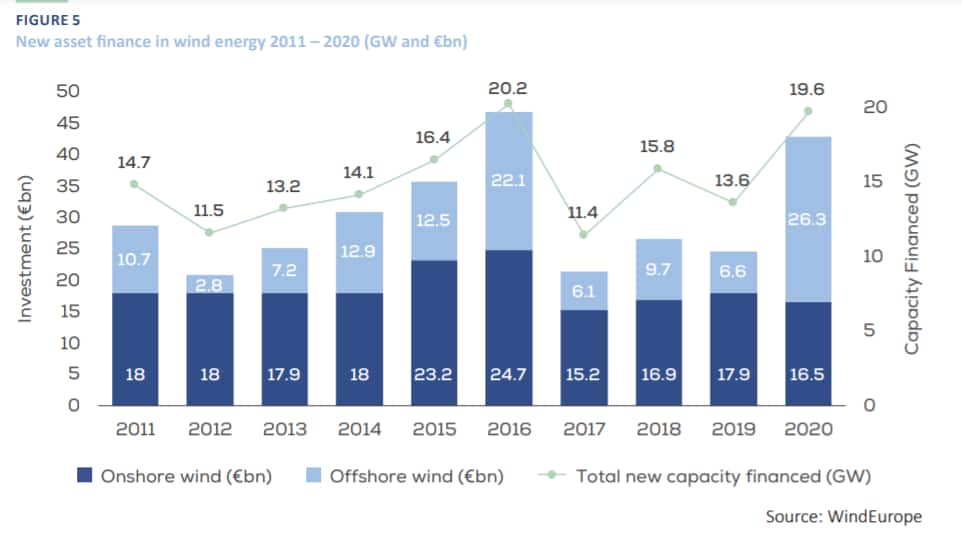 Financing of newbuild capacity represented more than half of the estimated €80 billion ($95.79 billion) spent on wind energy projects, which included €6.5 billion on refinancing, and €9.9 billion in company acquisition deals.

In 2020, WindEurope said the main driver for new growth was "the record year for offshore financing." The group also said the 2020 total marked the second-highest level since 2016, when developers sought to pre-empt the phasing out of "feed-in tariffs," or fixed electricity prices paid to renewable energy producers for each unit of energy produced and fed into the grid.

"As one of the most mature, proven renewable technologies that can be delivered at scale, wind projects present an extremely attractive opportunity for investors," Edward Northam, Head of Green Investment Group (GIG) Europe, said in a statement accompanying WindEurope's report.

Northam said the challenge currently facing the sector therefore lies not in access to capital, "but in accessing a pipeline of investable projects".

"As things stand, we expect [Europe] to install only 15 GW a year over each of the next five years," said the report, which summarized financing activity across the European wind sector in 2020.

Apart from complicated permitting procedures, the report said there is dearth of staff to handle applications for existing volumes, "let alone the higher volumes needed for our climate and energy goals."

In some countries, permits are extremely hard to obtain, WindEurope Chief Policy Officer Pierre Tardieu said during the webinar, pointing to Italy, where 100% of onshore wind projects in the past several years have been rejected by superintendents, or local officials charged with preserving cultural artifacts.

Italy at this rate, he said, will find it "very, very difficult" to meet its share of the EU's climate goal, which is a 30% cut in GHG levels below 2030.

Tardieu said the existing EU framework is not working. He said the European Commission's existing framework will not deliver the huge volumes of wind power needed to meet the 2030 climate goals.

The "Fit for 55" legislative package currently under review before the EC should include steps to overcome the permitting bottlenecks, Tardieu added.

According to WindEurope, offshore wind garnered record financial backing in 2020 among European countries, while onshore installations slipped to their lowest investment level since 2016. Investment in offshore wind exceeded onshore wind for the first time in 2020.

While the industry anticipated a low onshore wind investment figure in the wake of the COVID-19 pandemic, the report said "it is vital that European onshore wind recovers quickly to meet the targets needed to deliver on the 2030 climate and energy goals, an outcome which will require significant further investment."

It is evident, "it's not the money, it's the number of projects that are needed," Brindley said.