The Philippines could install as much as 21 GW of offshore wind capacity in the next three decades as the country's generation stack is diversified as part of a decarbonization push, a new World Bank report shows.

In the roadmap formulated by the World Bank in partnership with the country's government, which was released 20 April, a total of six development zones (see map below) are identified for offshore wind that could be supplying as much as 21% of the Philippines's electricity by 2050.

The Philippines currently has no offshore wind turbines turning, and if the roadmap's projections are to come to fruition, the World Bank reckons "the right long-term vision, infrastructure development, investment, and policies" will be needed. Such ambition would, however, bring greater investment and cost reduction, it added. 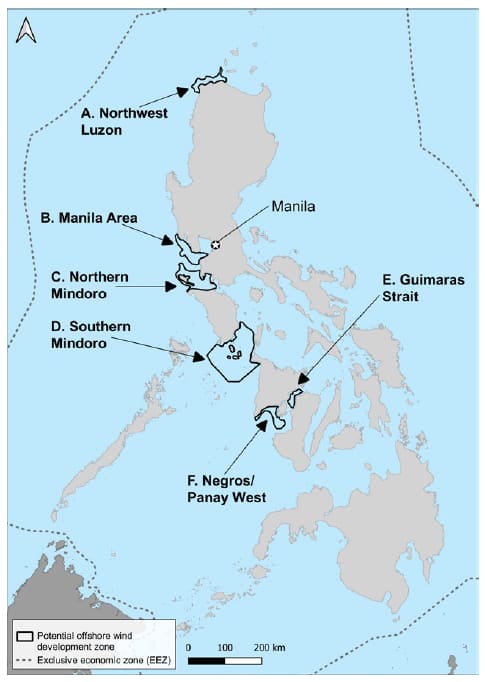 Coal-fired power represented almost 48% of the nation's power in 2019-2020, according to the Philippines Department of Energy (DOE), and oil and natural gas contributed another 28%. Renewables contributed 24%, of which a 90% share was hydropower. Emissions from the burning of coal and oil comprised around 87% of the Philippines' carbon emissions in 2021, according to the World Bank.

The government has a two-pronged plan to change its generation stack: increase gas-fired generation as a transitional fuel and hike renewable output.

In October, the Philippines set targets of generating 35% of its electricity from renewable sources by 2030 and 50% by 2040 to help counter global warming.

The report identifies six possible areas for development: Northwest Luzon, Manila Area, Northern Mindoro, Southern Mindoro, Guimaras Strait, and Negros/Panay West. Indeed, the combined capacity of the six zones could reach 40 GW, which is 54% greater than the Philippines' total generation capacity from all resources in 2020 of around 26 GW.

Around 90% of the potential is found in waters deeper than 50 meters, which will require the use of floating offshore wind turbines, the report said. This is not an uncommon challenge, some 80% of the world's offshore wind resource potential lies in waters deeper than 60 meters, according to the Global Wind Energy Council (GWEC), a trade association.

In the roadmap, the bank envisages two scenarios, a low-growth scenario that sticks to the government's existing renewables plans, and a high-growth option where it aims higher and takes a path that gets closer to the 21 GW target.

To do so, the multilateral bank recommends establishing offshore wind development zones through further marine spatial planning; investment in transmission, port and other energy infrastructure upgrades; and increasing collaboration with industry and other relevant government agencies.

The roadmap was well received by the government. "The Philippines has a rapidly growing demand for power," said DOE Secretary Alfonso Cusi. "It is clear from this roadmap that offshore wind can play a major role in meeting our country's energy demand indigenously, while also accelerating decarbonization."

DOE has already awarded 30 wind energy service contracts (WESCs), representing a cumulative offshore wind capacity exceeding 20 GW, according to the report. Many of these WESC areas coincide with the zones identified in this roadmap, it said.

GWEC expects 16.5 GW of floating wind installations to be operational globally by 2030 and it sees a clear opportunity for floating wind in the Philippines, spotlighting the country's potential in a March report.

The Philippines benefits from a few but "very decent sites" with prospective wind conditions in close proximity to the largest load center of the capital Manila, GWEC said. In this area, sites are identified with wind speeds up to 10 to 211 meters per second and less than 500-meter water depth, making it attractive for floating wind (see World Bank map below), it said. 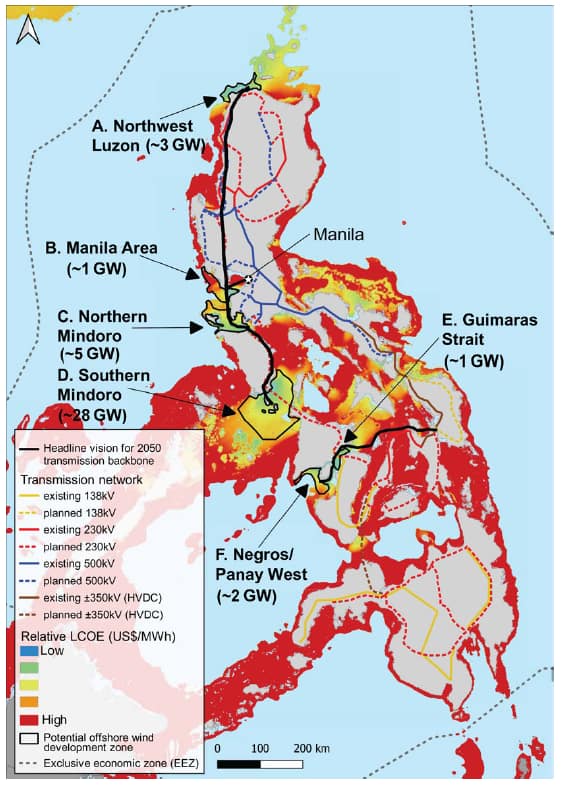 At least one industry giant agrees. In January, Iberdrola signed an agreement with Stream Invest Holding, a Swiss renewable energy group, and Triconti ECC Renewables, the Philippines' largest independent wind developer. Through the deal, the Spanish company secured an option to take part in five Filipino projects with a combined capacity of 3.5 GW. All the projects have WESCs. Iberdrola said the deal opens the door to a market with "strong growth potential over the coming decades."

Any long-term buildout of offshore wind capacity and renewables in general must be placed in the context of the two-pronged plan, the paucity of onshore sites due to agriculture accounting for 22% of Filipino employment, and prior decades' generation fleet tendencies.

The Philippines had 7.62 GW of installed renewable capacity as of the end of 2020, including 3.78 GW of hydropower and 1.93 GW of geothermal power. Renewables' share of the generation pie fell to 21% in 2020 from 34% in 2008, with the country opting to expand coal-fired generation to meet rising electricity demand in the 2010s.

According to the government's October pathway, the Philippines needs to increase its installed renewable capacity by 21.9 GW by 2030, including 18.6 GW of solar power and nearly 2 GW of hydropower.

New rules for green power auctions were announced in August 2021 and those rules came a few months after the nation updated its nationally determined contribution (NDC) under the Paris Agreement. Prior to that, a moratorium on new coal-fired power plants was introduced in October 2020. The updated NDC would see a 75% reduction in GHG emissions from a 2020 baseline by 2030.