Driven by a need to balance intermittent renewable energy and enabled by expected reductions in battery costs, US energy storage installations will grow by more than eight times their level at the end of 2020, a new National Renewable Energy Laboratory (NREL) report concludes.

NREL's reference forecast is that more than 200 GW of storage will be installed in the US by 2050. 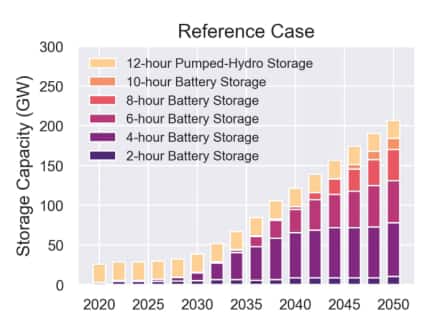 In addition to balancing loads in renewables-heavy grids, utilities also are realizing other benefits of widespread storage use, NREL said:

In terms of gigawatt hours (GWh), total US capacity in 2020 was about 300 GWh and will be about 1,200 GWh in 2050, said NREL, or even greater if the cost curve improves more rapidly than expected. 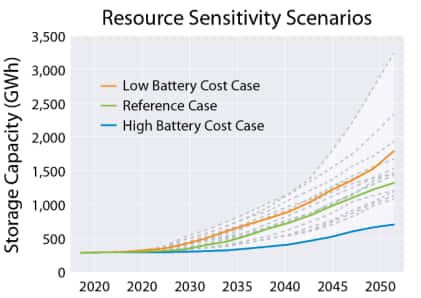 NREL's report, "Storage Futures Study: Key Learnings for the Coming Decades," reinforces news from the American Clean Power (ACP) Association that storage installations reached a record 1.6 GWh in the fourth quarter of 2021. ACP noted that even with unexpected project delays due to supply chain problems, the quarter's total still represented more than the 1.5 GWh installed in the first three quarters of 2021.

"For a number of years, energy storage was an idea, a promise … that was in the future," Burwen added in a conversation with Net-Zero Business Daily by S&P Commodity Insights. "That's changed; storage is here now. We're already seeing it at multi-gigawatt scale for the first time, and it's going to be deployed in a massive scale."

Widespread storage will change the economics of delivering reliable power, just like the falling costs and capacity increases of wind and solar power in the last decade, Burwen added.

Costs for lithium-ion batteries have been falling sharply for a decade, helping to boost interest in the technology, said NREL.

S&P Global Commodity Insights said in a February report that prices globally were about $110/kWh in the second half of 2021. 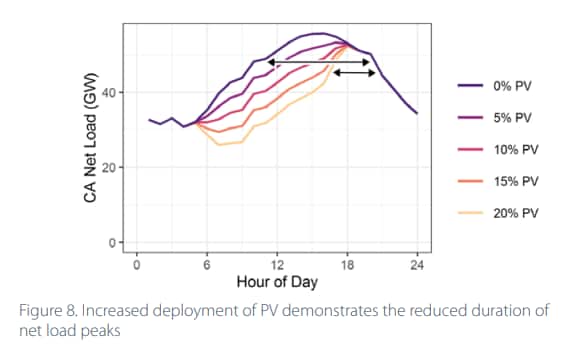 "The change in the peak net load shape increases the potential for storage to serve peak demand and increases time-shifting opportunities," NREL said.

Putting it simply, utilities will have to build less capacity to provide reliable service during peak times, and they will be less reliant on baseload power, such as natural gas, for that steady supply.

Reflecting this trend, S&P Global found that in 2021, 57% of new battery installations were co-located with solar, compared with 8% in 2020. It forecasts that over 50% of new battery systems will be paired with solar through 2025, given current incentives in the federal investment tax credit.

In a report published in April, S&P Global said that the co-located systems also are attractive because they create multiple revenue streams that reduce the impact of falling wholesale power prices (which themselves are being created by the advent of low-cost renewable power). "The ability to stack multiple revenue streams for renewables has become increasingly critical to generation economics in order to offset declining wholesale capture prices in markets with high renewables penetration," the report said.

Utilities took advantage of lower system costs to extend the capabilities of new systems last year. The average duration of a new battery system topped three hours for the first time ever in 2021, S&P Global said.

Not surprisingly, states with large renewables presences will be the most likely destinations for storage. Of the 50 GW of battery energy storage that S&P Global expects to see installed in the US from 2022 through 2030, about 60% will be in California and Texas. New Jersey, New York, and Virginia can be expected to show growth later in the decade, as the states have imposed energy storage targets on their utility sector.

Lithium-ion batteries are excellent for shorter durations, but for diurnal storage (12 hours or more) NREL said other technologies will have to come to the forefront. In past decades, it's been pumped storage hydro, which has about 22 GW of installed capacity in the US.

But expansion of pumped hydro has stalled due to a lack of options for more facilities and difficulties with environmental permits. NREL found that other technologies to provide long-duration storage will become "economically competitive across a variety of scenarios…"

NREL identified compressed air storage and pumped thermal storage as likely candidates for additional long-duration use in the future.

For utilities, long-duration storage will be a part of future reliability planning, Burwen added. "I don't think anybody would argue that four-hour batteries will be the solution to an outage like Texas had in 2021, but having seasonal storage that can provide days of discharge can add significant value," he said.

Bringing storage into the utility mainstream raises important issues about how system reliability can be ensured and how it's compensated through the rates utilities can charge their customers.

As renewables took on a larger share of the generation stack in the last decade, the reliability answer was to use increasing amounts of natural gas-fired generation as the baseload resource for when renewables weren't operational. Traditional market designs covered payment for construction and operation of those units.

But if President Joe Biden's push for 100% carbon-free electricity by 2035 is to be achieved, gas isn't an option any more than coal power. "At the end of the day, we are moving to system less based on fuel-based systems, and more on energy storage for reliability," Burwen said.

As Burwen explained, renewable power can be more costly to install than a gas-fired system (upfront "capex" costs), but is far less expensive to operate (ongoing "opex" costs). "That means our power system will become even more capex-driven than opex-driven," he said. "Wind and solar is mostly upfront capital cost and then run with nearly zero marginal cost. Battery storage is not very different."

The Federal Energy Regulatory Commission is grappling with how its market design rules can be adjusted to support renewables and storage, given the different relationship of capex and opex.

Already, the impact of falling installation costs plus near-zero operating costs can be seen in the price of new storage, according to S&P Global. "Four-hour battery energy storage systems are being contracted at prices competitive with gas peakers, especially when paired with solar to access the investment tax credit," it said. "Many contracts are at or below $80kWh-year, the low-end cost of a new [gas] peaker."

Utilities and energy traders are trying to understand new markets too, Burwen said.

As battery storage and renewables become the primary sources of power, opex has less of an effect on marginal costs and short-term power prices. "Non-fuel power could have a dampening effect on power price inflation. Every EV driver will tell you that right now," Burwen said.

EVs and the broader electrification of transportation are changing energy storage. On the demand side, electrified transport puts new pressure on power providers to increase capacity. But on the supply side, it gives them the opportunity to tap into electric vehicles as another source of battery storage.

"Our member companies are 100% aware of how significant a change to the power system the integration of transport will cause," Burwen said. "How much generation will we need? How do we plan the transmission wire network? We now have a 'battery on wheels' connected to grid, and they're increasing fast—are we going to use them?"

Work on integrating electric vehicles into grid storage is underway in pilot programs, and Burwen predicted that companies "will figure this out [in] this decade."

One certainty is that storage is changing how power is delivered and priced, Burwen said. "With solar, we're going to go from a world in which [the advice is] don't charge your car in the middle of day to yes, charge in the middle of day because we have so much solar," he said. "The whole shape of the net load profile will change further with energy storage. And the economics will shift as we time-shift with storage."