Norway's government expects 30 GW of offshore wind capacity to be operational in its waters by 2040, unveiling a goal on 11 May expected to drive hydrogen exports by Europe's largest oil and natural gas producer as well as electrification of the country's economy.

Announcing the target, Prime Minister Jonas Gahr Støre said in an 11 May speech: "We need more power for the industry that is planned in Norway—battery production, hydrogen production, and investment in new aluminum advances."

"Everyone we encounter when we meet with Norwegian industry talks about replacing gas with hydrogen and reducing climate emissions. This is directly the key to achieving those goals," he added.

Expansion of Norway's offshore wind ambitions was part of the Hurdal Platform, which laid out the Labour Party-Centre Party coalition's plans in October. As well as a commitment to enter the offshore wind fray, the platform said Norwegian emissions will be cut by 55% by 2030 compared with 1990, the Guarantees of Origin system would be removed, and Norway would continue searching for new oil and gas.

However, the coalition failed to replicate the actions of its North Sea neighbors and set interim targets, which industry sources say would provide even greater reassurance for developers and supply chain companies on the investment prospects at a time when countries around the globe are announcing offshore wind goals.

The Støre government previously came under fire from industry players for failing to hold lease auctions and for not aiming high enough for offshore territories that promise consistent, strong winds.

Local support was less qualified 11 May. Trade group Norwegian Offshore Wind (NOW) said the goal was "completely in line" with what its members wanted and "can deliver on."

"We are very pleased to finally see a clear timeline for offshore wind in Norway. We get the predictability that the industry needs to get started and make investments," said NOW Manager Arvid Nesse.

Oslo-based Statkraft, which says it is Europe's largest generator of renewable power, told Net-Zero Business Daily by S&P Global Commodity Insights on 11 May that "we're very pleased" with what it termed "a lofty, but realistic target."

The government's plan also found favor with offshore wind pioneer Equinor, which is Norway's biggest oil and gas producer. A spokesman told Net-Zero Business Daily it was a positive step. "We believe that there is a great potential for developing offshore wind in Norway," the spokesman said, adding: "It is important to get started in order to be able to realize the potential, and we look forward to see the detailed criteria for the two first developments—Sørlige Nordsjøen II and Utsira Nord."

If the 30 GW of capacity is added, the Norwegian offshore wind sector will be the same size as the country's existing generation sector.

The announcement "makes this day an anniversary in Norwegian industrial and energy history," Støre said in a speech unveiling the goal, noting Norway had offshore wind opportunities equivalent to those of the rest of Europe combined.

"With favorable sea areas, workers with world-leading technology expertise and good cooperation between the state and business, we all have the prerequisites for success," he added in a statement announcing the goal.

In addition, he said the potential for drive green hydrogen production with offshore wind is just as important an opening, one that could not have been imagined less than a decade ago. "This was almost science fiction five years ago," he said.

Støre's government foresees shipments of power from Norwegian waters to both the domestic coastline and through interconnectors to elsewhere in Europe. The government also expects the power to be used for the electrification of the country's economic driving force—the oil and gas sector.

All of the Nordic nation's demand is currently covered by its existing hydroelectric power generation fleet, which is a blessing for energy users, but a major hurdle for project dvelopers.

It is very hard to add generation profitably in Norway at the moment because demand isn't expected to increase significantly without a transformational overhaul of industry, S&P Global Commodity Insights Principal Research Analyst Andrei Utkin said 11 May. Any additional generation would lead to a decrease in prices, he noted.

Norway's existing power export channels encompass the UK, Germany, Poland, Sweden, and Belgium, but supply is on the rise in these markets too, with Germany for example announcing just before Easter plans for a 70-GW strong armada of offshore wind turbines to combat an end to Russian gas supplies.

Although the capacity of the undersea electricity export interconnectors is expected to be expanded, it is in green hydrogen where exports will truly take off, said Utkin.

In March, the governments of Germany and Norway agreed to look into shipping hydrogen across the North Sea to Germany, Europe's biggest economy, including by pipeline.

For the wind auctions, the government plans to open up a total area of ​​about five to six times the size of the Sørlige Nordsjøen II (Southern North Sea II) license, or about 1% of Norwegian sea areas.

A round of offshore wind license sales in new areas is expected in 2025, and before then the Ministry of Petroleum and Energy (MPE) will investigate a streamlining of the licensing process.

"We must be fast, but also wise," Minister of Petroleum and Energy Terje Aasland said in the statement, stressing a step-by-step approach would be used and that a secure and efficient power supply would be developed without elbowing fishing and other interests aside. Both Aasland and Støre also stressed how the extra power supplies would tamp down prices, which have increased of late, as they have elsewhere in Europe.

Sørlige Nordsjøen II will be the first area to be developed, as Equinor noted. In February, the government announced a 1.5-GW tender would be held for phase one of development. The tender will be held in 2022, it said, without providing more details. This week's announcement didn't shed any more light on when the auction will be held. A second 1.5-GW phase of development at Sørlige Nordsjøen II is also on the cards, the government said in February, as is opening up the Utsira Nord leasing area (see map below). 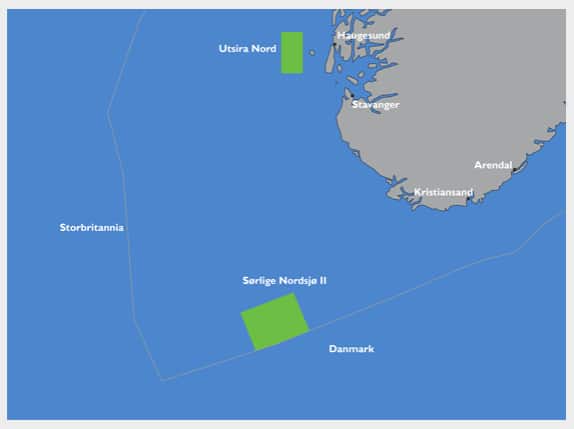 That followed a June 2020 announcement of a royal decree opening the areas up for renewable power development. Sørlige Nordsjøen II borders the Danish sector of the North Sea and offers export options, the MPE said at the time. It involves 2,591 square kilometers and offers depths for fixed-bottom development as well as floating turbines. Utsira Nord is closer to shore but only suitable for floating wind projects, the ministry said.

Until the potential fixed-bottom options are depleted, that is where developers are likely to head, said Utkin, because of the difference in fixed-bottom and floating technology costs at this point in the industry's maturation.

S&P Global estimates Norway has a fixed-bottom offshore wind potential totaling 50 GW. Still, how much of the that capacity is economically feasible is unknown yet, as detailed mapping of the potential areas has yet to take place, said Utkin. That said, the majority of Norway's offshore wind potential is in the floating segment, he noted, adding that the country has first-mover advantage in the sector.

Equinor's Hywind Tampen project, due to begin operations in the third quarter of 2022, will be one of the first operational floating wind developments in globally. Also, Equinor and Vårgrønn, a joint venture of Italy's Eni with Norwegian equity firm HitecVision, said in May 2021 they plan to develop floating offshore wind off Utsira and Haugalandet.