The two largest landfill operators in North America have committed nearly $2 billion recently for new renewable natural gas (RNG) installations, indications that the fossil fuel substitute is overtaking production of electricity as the preferred end-use of the captured methane.

Waste Management on 28 April said it will invest $825 million to build RNG plants at 17 landfills it owns, more than doubling its RNG production sites. A week later, Republic Services, the second-largest landfill operator, and biofuels firm Archaea Energy on 5 May announced a $1.1-billion joint venture to develop 39 RNG projects across the US.

Biogas is made from methane generated from a wide variety of organic matter, most commonly sourced from landfills, manure, or sludge from wastewater treatment plants. RNG is a purified form of biogas, indistinguishable from fossil fuel natural gas. It is a higher-value product though that can be used to fuel vehicles just like compressed natural gas and drive industrial heating processes just like natural gas. According to the World Resources Institute, nearly 40% of the natural gas consumed by vehicles in the US in 2020 was RNG, and the figure is rising.

Approximately 2,300 biogas projects were operating across the US as of the start of 2022, according to the American Biogas Council. Of those, about 2,000 generate electricity on site and send it to the power grid.

The other 300 units are upgrading the biogas to RNG—and that's where the growth is occurring, Patrick Serfass, the council's executive director, told Net-Zero Business Daily by S&P Global Commodity Insights. "About nine of 10 new projects in development today are for RNG," he said.

The Archaea-Republic and Waste Management investments will meet rising demand for RNG as a zero-carbon or even negative-carbon energy solution. (However, the end use of RNG does generate emissions, just like burning fossil fuel natural gas.)

The projects, all of which are expected to be operating in the next five years, will have production capacity of about 12.5 million MMBtu of RNG per year, or about 34,000 MMBtu/day.

"Sustainability is a platform for growth at Republic, and our continued investment in landfill gas-to-energy projects delivers meaningful environmental and economic benefits to our stakeholders," said Jon Vander Ark, Republic Services president and CEO, in a statement.

The company has set a goal of doubling its capture of biogas by 2030, he said. This is an economic opportunity, as well as an environmental goal, he added. "Market demand for renewable natural gas to reduce greenhouse gas emissions is growing significantly," he said.

For Archaea, it's the second large deal this year. In February, it announced a 20-year agreement with FortisBC, a Canadian energy producer. FortisBC has committed to the purchase of approximately 7.6 million MMBtu/year of RNG generated by Archaea from its existing and planned RNG production facilities. The purchases will help FortisBC move towards its goal of 15% RNG use by 2030, it said.

Waste Management said that its investment will more than double its landfill gas operations in North America from 16 units today to 33 by the end of 2026. New units in Oklahoma City, Oklahoma, and Springdale, Arkansas, are on track to reach service this year.

In an email to Net-Zero Business Daily, the company said expects production by the end of 2026 to reach about 24 million Btu/year, and it said it will be capturing approximately 1.3 million metric tons/year of CO2-equivalent that would have been released to the atmosphere through decomposition of organic matter.

Conversion of biogas to RNG "is a smart economic move for the companies and their shareholders," said David Cox, founder and chief financial officer of the Coalition for Renewable Natural Gas.

"These companies have realized they're not only in the refuse business any more; they're in the energy business," Cox told Net-Zero Business Daily.

However, those volumes should be kept in perspective, as they are less than 1% of projected total US natural gas production in 2026 of 106.3 million MMBtu/d.

Growth is being driven by two factors, say analysts. First are incentives in the federal Renewable Fuel Standard (RFS) program and the California Low Carbon Fuel Standard (LCFS), both of which provide tradeable credits for RNG that's used in transportation.

California's LCFS makes RNG particularly attractive, and the California Public Utilities Commission (CPUC) said RNG accounted for about 12% of the state's natural gas use in 2020, or about 14 Bcf. In February, California raised its commitment to RNG again, as the CPUC approved a minimum mandated use by the state's utilities of 17.6 Bcf/year of RNG in 2023. This will rise to 73 Bcf/year by 2030.

Uncontrolled emissions of methane in the waste, landfill, agriculture, and forest management sectors account for more than 75% of the state's methane emissions, the CPUC said. The RNG program will reduce that by nearly half by 2030.

Waste Management is checking a box in its ESG plan, as it intends to operate at least half of its fleet of vehicles on RNG by 2030, and it said the new production facilities will accelerate reaching that goal.

To cite one of many examples in the industrial sector, Serfass said that global cosmetics company L'Oreal has a sustainability plan. It can't make cosmetics cost-effectively and efficiently with electric power, so it needs natural gas. It's buying RNG to drive its processing facilities.

When operating in the "voluntary market" driven by ESG considerations, gas buyers such as L'Oreal sign long-term contracts for RNG, Serfass said. This provides developers such as Archaea with a guaranteed income stream that eases financing for the projects.

In the "compliance market" of the RFS and LCFS, the value of a credit generated by RNG goes up and down based on market factors.

"If you are an investor in this space, you have both options, depending on your risk appetite," Serfass said.

In carbon credit markets, RNG is a particularly valuable commodity because it achieves carbon reductions through the fuel lifecycle—with some sources deemed to be "carbon-negative"—and thus generates higher value credits than other alternative fuels, Cox explained.

Argonne National Labs, which is operated by the US Department of Energy, has developed the GREET (Greenhouse Gases, Regulated Emissions, and Energy Use in Technologies) model to calculate the lifecycle emissions of the production and use of every type of fuel and energy resource. GREET is used by the US Environmental Protection Agency and states to measure the tons of CO2 emissions that would be generated, and thus the emission credits for avoiding them. Turning landfill methane into RNG generates signficant carbon emissions benefits because methane that would otherwise escape to the atmosphere has been captured, Cox explained.

Under the California LCFS, the carbon intensity (CI) score for landfill-based RNG is often half of the diesel fuel baseline, Cox said. As each RNG facility is individually assessed by state agencies, some CIs derived from animal manure have received scores at negative 300 or more, Cox said. 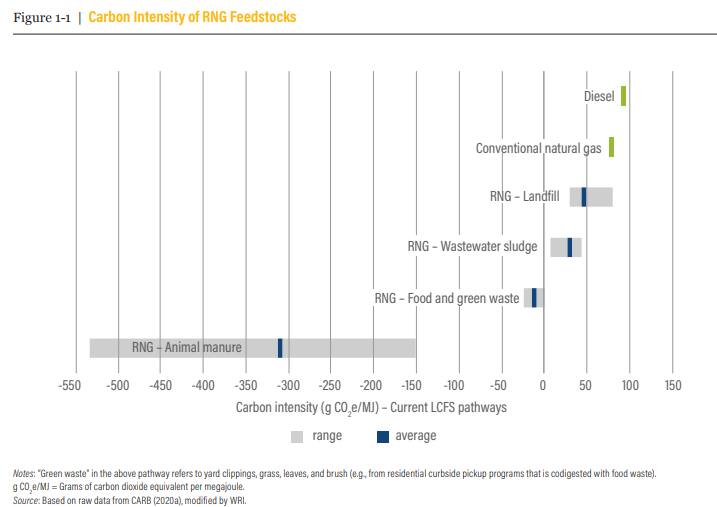 Cox said that the best markets for RNG are hard-to-electrify applications, such as buses or heavy-duty trucks. "Maybe, some day we will get to the point of viable electric 18-wheelers, but that's not where we are today," he said.

Serfass added that utilities and manufacturers seeking to reduce their carbon footprint find RNG attractive because the negative-carbon formula means that they can achieve their goals at relatively low purchase volumes. "If you're a natural gas user, you don't have to replace all of your gas to be carbon neutral to reach net-zero," he said.

Looking ahead, the trade group leaders said they expect significant growth in North America. The American Biogas Council estimates that 15,000 waste sites and farm operations are strong applicants for biogas facilities, including RNG. Europe has already built out its sector more extensively than the US, with about 10,000 facilities operating.

"That's why you see European and Asian companies looking to get a foothold here—they see the potential," Serfass said.

Given the goal of the US and other nations to reduce methane emissions, RNG is an obvious solution, Cox added. "We as a society are producing waste. That waste will decompose, and it will release methane. We have a decision to make: What are we doing to do with that waste we are producing?" he said. "What these [landfill and biogas] companies are doing is taking an environmentally responsible stance in collecting that methane and then putting it to productive use to displace a higher-carbon alternative."

The fact that this process can be done at a profit makes it even more attractive, Serfass added. "It's great that money is being made to produce renewable energy because nobody is paying to recycle the organic material," he said.