The New Zealand Parliament is expanding on a government order made in September 2020 requiring large insurers and financial institutions to identify their risks from climate change.

The government claims that the Financial Sector (Climate-related Disclosure and Other Matters) Amendment Bill would be the first such national law in the world. If enacted, reporting will be mandatory starting with fiscal year 2022, with the reporting deadline in 2023.

The bill, once enacted into law, would cover insurers with over NZ$1 billion (US$750 million) in assets under management; all banks, credit unions, and building societies with total assets exceeding $1 billion; and all equity and debt issuers listed on the national stock exchange NZX. The institutions affected by this bill represent about 90% of assets under management in New Zealand, according to the government's announcement.

"We simply cannot get to net-zero carbon emissions by 2050 unless the financial sector knows what impact their investments are having on the climate," said Minister for Climate Change James Shaw in introducing the bill. "This law will bring climate risks and resilience into the heart of financial and business decision making."

The bill would set into law guidance issued in September 2020. In all, about 200 institutions would be affected, including state-owned investment funds.

One of those institutions, Australia and New Zealand Banking Group (ANZ), told IHS Markit that it "supports the ambition and sentiment of the bill to bring climate risk and resilience into the heart of financial and business decision making. We recognize the fundamental role we, as New Zealand's largest bank, can play in shifting investment towards a low-emissions future that values biodiversity and nature-based solutions here in New Zealand."

A first reading on the bill was held on 15 April, and it is open for public comment through 28 May before a second reading in the Economic Development, Science and Innovation Committee.

"As the governing Labour Party has a majority of seats, and the Green Party's support can be expected, the bill is likely to pass in a form similar to what was initially introduced," said Russell McVeagh, a New Zealand law firm, in an analysis made available to IHS Markit.

The bill states that the standards will be developed by the External Reporting Board (XRB) based on the Task Force on Climate-related Financial Disclosures (TCFD) framework. The XRB is a government body charged with issuing accounting standards and coordinating with international organizations that have similar standards-setting functions.

The TCFD was created in 2015, and its first recommendations were issued in 2017. Since then, these have been expanded and refined to identify voluntary disclosures in four core areas of business operations: a company's governance, strategy, risk management, and the metrics and targets used to monitor and assess climate-related risks and opportunities, explained Russell McVeagh.

Under the bill, the Reserve Bank of New Zealand, the nation's central bank, will be required to disclose its climate risk alongside private institutions. It issued a report in March that generally supported the TCFD framework for voluntary disclosure "as a way to mainstream and integrate the consideration of climate-related risks across organizations." But it noted that TCFD was developed for the private sector, "and further study would be required to identify any limits to the suitability of this approach for the public sector."

The Reserve Bank also noted the benefits for New Zealand's green industries if the government acts quickly and decisively to set a new international standard. "There is a window of opportunity to take advantage of low interest rates and global capital markets that are awash with liquidity," it said.

The XRB already is moving ahead with its plans to develop a standard, even as the law is still being debated in parliament. In May, XRB said it is preparing a draft standard that will be released by June 2022. During summer and fall 2022, that standard will be subject to public comment and review, and it will be finalized in December 2022, to enable the first reporting to occur in 2023.

Under the proposed legislation, each covered institution in New Zealand would have to submit an annual report that discloses its climate risks and explains how it will manage them. Institutions that opt out of disclosure would have to explain why. The Financial Markets Authority will review those disclosures and enforce compliance. Under this bill, violations would be subject to corporate criminal penalties of up to NZ$2.5 million (US$1.8 million) and up to NZ$500,000 (US$361,000) for individual directors; and civil fines could be up to NZ$50,000 (US$36,100).

Already, New Zealand's regulators have powers to oversee climate risk disclosures, though without the new law the impact has been limited primarily to guidance, not binding regulations. As an example, the Financial Markets Authority issued guidance in May that Russell McVeagh said "clarifies how existing prohibitions against misleading or deceptive conduct or representations can be applied to such products."

New Zealand was one of the first nations to submit to the UN a nationally determined contribution (NDC) to reduce GHG emissions under the Paris Climate Agreement. Its May 2016 NDC, which was affirmed in a filing on 25 April, set the following goals:

However, the government-appointed Climate Change Commission said in a draft report in January that the nation is falling short of its interim and ultimate goals. Also, the commission recommended that the NDC itself be raised to a 35% reduction by 2030.

"In 2018, gross greenhouse gas emissions in Aotearoa [Maori term for New Zealand] were about 45.5 Mt CO2-e of long-lived gases, and 1.34 Mt CH4 (biogenic methane). Our analysis shows if policy stayed as it is now, Aotearoa would fall short of achieving the 2050 net zero long-lived gas target by 6.3 Mt CO2-e. Biogenic methane would reduce 12% below 2017 levels and fall short of the current target of 24-47%," it said. 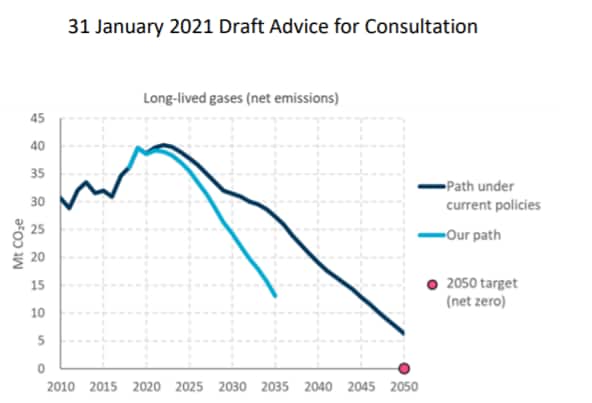 In its NDC, New Zealand referenced a "forestry-based approach" to reduce carbon emissions. The strategy "will create incentives for the establishment of new forests, recognize permanent, long-term enhancements of carbon sinks ... and take responsibility for deforestation." The country has enacted an emissions trading program based on those forest carbon sinks.

But the commission's new report says this is inadequate. "Aotearoa must focus on decarbonizing and reducing emissions at the source. As a country we can no longer rely on forests to meet our climate change targets," it said.

The report, which will be submitted to the government on 31 May, recommends enacting policies to require or incentivize a range of carbon-reduction strategies in key sectors of the economy. This includes having "the majority" of vehicles in use be electric by 2035, and the use of biofuels and hydrogen for transport in heavy-duty trucking, shipping, and flights. For heating (residential and industrial), the commission recommends a transition by 2035 to electrification, and this would be supported by expansion of renewable power and the elimination of all coal-fired power sources.

In the forestry sector, it recommends a continuation of current policies, such as planting of pine forests to absorb carbon, but improved biodiversity and wetlands management. It also said that the farming sector's contribution to GHG emissions can be reduced through innovations in management of animal waste.

The report backs the mandatory disclosures and recommends consideration of an extension to public nonfinancial entities in the future.

Although New Zealand could be first out of the gate in mandating corporate climate risk disclosure, Christine Chow, IHS Markit global head of strategic governance advisory and ESG integration, said other countries are not far behind. She said the UK will likely finalize mandatory reporting by the end of 2022, and Hong Kong has said its goal is to require it by 2025.

The standards themselves continue to evolve too, Chow said. While the TCFD's four pillars include extensive guidance for how a company identifies short-, medium-, and long-term risks and its processes for identifying and managing those risks, Chow said they have limitations. "TCFD does not contain metrics" by which different institutions' risk management can be compared, she said.

Rather than identifying the metrics by which progress is measured, TCFD only requires disclosure of the metrics that each entity has chosen. As a result, comparisons are difficult, Chow explained. Over time, Chow said that the standards-setting groups and countries will likely move towards "standardization of the underlying definition of the data," which will enable better comparisons of progress. Standardization will also facilitate growth of emissions-trading programs, she said.