Pressure is building on the government of New Zealand to alter a long-standing ban on genetically modified crops if Prime Minister Jacinta Ardern wants to conquer emissions from the key agriculture sector effectively in a highly anticipated emissions reduction plan.

Due by the end of May, the emissions reduction plan will lay out a sector-by-sector transformation of life in New Zealand, according to the government, which issued a draft consultation in October 2021 as it seeks to cut GHG emissions by 50% by 2030 and reach net-zero by 2050. The latter promise is enshrined in law through the Zero Carbon Amendment Act of 2019.

Agriculture contributed half of New Zealand's total emissions in 2020, according to the government's latest GHG inventory, which was released in April.

The agriculture and energy sectors were the two largest contributors to New Zealand's gross emissions in 2020, at 50% and 40%, respectively. Energy encompasses transportation, electricity generation, and "other energy" (see graphic below). 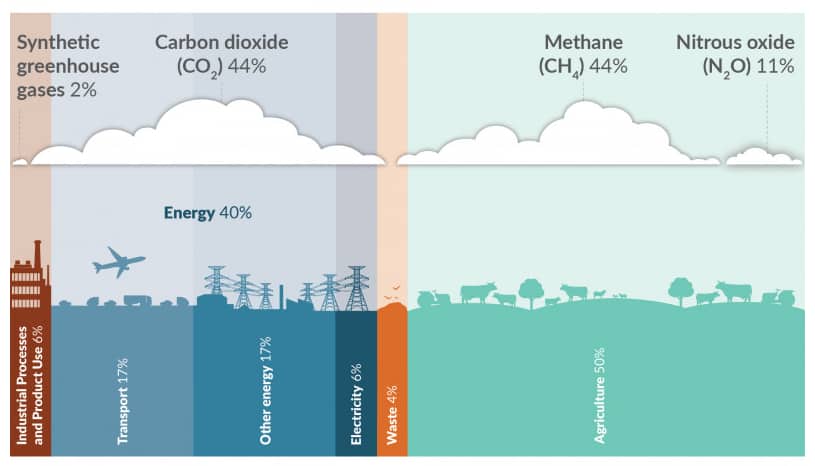 Methane and nitrous oxide emissions could be reduced by altering the food eaten by ruminants such as cattle and sheep. Milk powder, butter, and cheese is New Zealand's largest export group while meat and edible offal is the second largest.

The de-facto ban was challenged by the NZ Productivity Commission, an independent Crown entity that provides advice to the government. The New Zealand Climate Change Commission (CCC) made a similar recommendation in May 2021.

CCC Chief Executive Jo Hendy re-iterated the recommendation in April when laying out a 10-point plan from the government-funded advisor on what it expected from the Ardern administration in the emissions reduction plan.

Eric Crampton, chief economist at pro-free market think tank NZ Initiative, concurs with that recommendation, noting that development of potential emissions reduction options for the country's biggest GHG producer are being hamstrung. Even field trials are "effectively impossible," he told Net-Zero Business Daily by S&P Global Commodity Insights on 2 May.

For instance, trials of modified ryegrasses that could reduce ruminant methane emissions by 23% were carried out by government-backed AgResearch. But the trials took place in the US. The ryegrasses also grow as much as 50% faster than conventional ryegrass. However, use of the variant, once testing is completed, is currently forbidden without regulatory change. AgResearch also worked on breeding low-methane-emitting sheep, work that took more than a decade.

Federated Farmers, a major farming advocacy group, said in a response to the consultation it wants an "appropriate regulatory framework to enable New Zealand farmers to safely use emissions mitigation tools, such as feed inhibitors and genetically modified ryegrass." It added that the government "must begin to enable and not hinder, innovation in the use of mitigation tools."

After the Productivity Commission report was released, Federated Farmers doubled down on its commitment to change. On 12 April, the trade group's president, Andrew Hoggard, said in a statement that New Zealand's "farmers are intensely interested in further reducing their world-leading GHG emissions footprint per kilogram of food produced, but the federation has been saying for several years now that we need new tools to do so. Genetic modification is one of those new technologies that offers exciting potential."

In a country determined to reduce its emissions footprint while maintaining a healthy farming sector, innovation is most certainly needed, said Crampton. "Agriculture will wind up facing a carbon price. Maintaining a de facto ban on the tech that helps adapt to rising carbon prices, and to changing climate, seems remarkably stupid," he said.

What's needed, according to the Sustainable Business Council, part of Business NZ, is an accelerated pathway for the development and adoption of biogenetic methane emissions reduction technologies. This should involve scaling up public and private funding, the business lobby group told the government in responding to the consultation at the end of 2021.

That's a position New Zealand's largest company, Fonterra Co-operative Group, can understand. Fonterra, responsible for 30% of the world's dairy exports, reckons finding a solution to the methane challenge would be a "game changer," CEO Miles Hurrell said in a statement accompanying the company's half-year earnings on 17 March. Fonterra is working on a probiotic to cut calves' emissions by 20%.

To cut emissions sufficiently from the agricultural sector, government's plan will have to implement a variety of strategies, according to Bill Kaye-Blake, New Zealand Institute for Economic Research (NZIER) chief economist.

"We need to produce more value per tonne of carbon emissions [in the agriculture sector], and that can come through greater value or lower emissions. At the moment, there's too much uncertainty about whether current policy and technology will work. He Waka Eke Noa might work, but it might not. Methane-reducing technology might work. Other technologies might work. Let's see a solid Plan B as well." Kaye-Blake said 2 May when Net-Zero Business Daily asked about his wishlist for the emissions reduction plan.

He Waka Eke Noa (HWEN), or the Primary Sector Climate Action Partnership, is a joint initiative between government, the primary sector, and iwi/Māori launched to measure, manage, and reduce on-farm agricultural GHG emissions and adapt to climate change. HWEN is working on a way to price on-farm emissions, outside of the existing New Zealand emissions trading scheme, and will present a final option that the government will make a decision on by December.

Adapting to climate change is another challenge the government must tackle. Drought cost New Zealand at least NZ$720 million (US$463 million) in economic losses over the past decade, according to the Ministry of the Environment, and the wildfire season is expected to lengthen by 70% over the next 20 years.

On 27 April, the ministry released its draft climate adaptation plan for public engagement and submissions. The plan is due to be finalized by the end of 2022.

April's adaptation plan and May's emissions reduction plan are part of efforts that will transform New Zealand, Ardern said in a speech 27 April. "Urgent, transformative global action is the only credible response to climate change. We have to halve emissions by the end of this decade," she told the FP Virtual Climate Summit.

When it comes to halving global emissions, "if we are successful, 2030 will not look anything like 2022. If we're on track, change will be evident," Ardern said, adding that it is not good enough for policymakers to just be ambitious for the future, "we need to be acting and implementing detailed plans now."

It won't be cheap though. "One of the keys is capital investment," said Kaye-Blake. "We have to invest money now to upgrade infrastructure, plant and equipment, and processes. By doing that, the economy can lift labor productivity and multifactor productivity at the same time as reducing greenhouse gas emissions. You can call it 'spending' or 'investment', but either way current GDP needs to be put towards better assets for future production."

Much of that spending will come on new technologies. Ardern's first official trip since the COVID-19 pandemic began was used to tie up deals with Asian partners on such technologies and fight the other major crisis of our times—climate change.

Ardern on 21 April teamed up with Japanese companies to launch hydrogen projects, including a hydrogen-powered car-sharing scheme in Auckland, New Zealand's most populous city; plus a hydrogen truck refueling system; and a green hydrogen power plant. A day earlier, Ardern inked a deal with Singapore to jointly develop a sustainable aviation fuel program. The two countries had already signed a signed a similar hydrogen cooperation agreement.

It is expected biofuels will also play a role in the emissions reduction plan for the transportation sector. In December 2021, the government introduced a sustainable biofuels mandate to help reduce GHG emissions in the transport sector. From 1 April 2023, fuel wholesalers will be required to cut the total GHG emissions for transport fuels they sell by a set percentage each year, by deploying biofuels as a part of their fuel supply.

In these initiatives and more that are on the way for electrification and biomass, co-ordination is a must, said Kaye-Blake. "The current way we power our economy has taken decades to coordinate. We can drive the length of the country and not run out of fuel because people have installed petrol stations everywhere over the past century," he said, adding that such a network must be replicated for EVs, biofuels, and for biomass boilers, "but in much less time."

Kaye-Blake also said the think tank wants to see Ardern and the emissions reduction plan improve productivity. "What we are talking about is becoming more efficient, which is essentially the same thing as raising productivity. We need to use less physical resources because they take energy to extract and turn into useful things," he said, adding: "We also need to use less energy (and use energy from renewable sources). If the plan doesn't tell us how we are going to improve our ability to get useful things out of less resources, it's a failure."