Need for faster wind power installation is direr than a year ago: GWEC

The need to ramp up wind capacity installation became even more dire over the past 12 months if the world is to avert catastrophic global warming, the Global Wind Energy Council (GWEC) said 4 April.

A four-fold increase in the pace of the global wind fleet buildout is now necessary to avoid a temperature increase of more than 1.5 degrees Celsius compared with pre-industrial levels, as the Paris Agreement seeks, GWEC said, rather than the three-fold hike in the pace of construction called for a year earlier.

Over the same period of time, business conditions for wind energy companies have deteriorated, and the trade group is seeking a reset on how the industry operates that takes into account impact of rising costs as well as the need for market designs that include the cost of carbon. Wind turbine prices have rocketed in recent months as a result of the rise in costs.

In its 17th annual flagship report, Global Wind Report 2022, GWEC forecasts that by 2030 less than two-thirds of the wind energy capacity required for a 1.5 degrees Celsius and net-zero pathway will be in place, "effectively condemning us to miss our climate goals."

As a result, GWEC called for the removal of direct and hidden subsidies or advantages for fossil fuels generation; governments to prioritize renewable generation when it comes to land/seabed allocation, procurement, construction, grid connection and dispatch; an accounting of the socioeconomic and environmental costs of carbon; and a realignment of electricity markets to consider the long-term value to the system of wind power more widely.

The wind industry is continuing to manage disruptions from COVID-19, the trade association said, but higher freight costs and commodity prices further squeezed margins for turbine and component suppliers and developers in 2021. Margins were already under price pressure as the result of a global market design that has created "race to bottom" conditions, it added.

Energy market designs based on short-term marginal costs that do not account for long-term benefits have created a distorted set of signals, GWEC said. Instead of incentivizing renewables, the market has ensured wind and solar are now developed at prices that lead to wafer-thin profit margins, including through pricey lease auctions in Europe and the US, while fossil fuel supply shortages are bolstering the continued investment case for fossil fuels, it added.

"Governments and regulators must untangle the Gordian knot around energy market design to shore up security of supply, support sustainable pricing and prepare for the clean energy transition," it said. "If policymakers and system planners are serious about these priorities, then energy market design must shift to reflect the systems of the future: flexible, responsive to demand, reliable and dependent on a majority share of renewable energy."

Power generation that pollutes the atmosphere and earth should also be penalized, it said. "Fossil fuels-based generation should be more accurately priced for the costly social, economic, and environmental burdens attached to them," the trade group argued, adding that: "Market signals should provide a clear pathway to a rapid replacement of fossil generation by renewables, as well as electrification of key non-power sectors."

Lawmakers must cut away the red tape the sector faces, it said, arguing that without streamlining the procedures to grant permits, including for land allocation and grid connection, projects will remain "stuck in the pipeline."

Politicians and regulators must also send signals to the market that they will invest in products that reward renewables' flexibility, and at the same time an "unprecedented" tripling of grid investment through 2030 is needed to keep pace with renewable buildout.

"The message is clear: the wind industry must grow very fast this decade to comply with the decarbonization targets around the world," Iberdrola Renewables Managing Director Xabier Viteri Solaun said in a foreword for the report, adding: "To do that, policymakers must guarantee regulatory stability as well as overcome permitting bottlenecks and further develop grids. The wind industry stands ready for a massive deployment of renewable capacity; national and regional policy must clear the path for this."

Still, GWEC expects the compound annual growth rate (CAGR) for wind installations over the next five years to be 6.6%, which equates to 557 GW forecast installations from 2022-2026.

In GWEC's year-ago market outlook, it predicted global onshore wind growth would slow in 2021 followed by flat growth in 2022 and 2023. However, GWEC upgraded its near-term forecast in this latest outlook due to the Chinese government's plans to reach peak emissions in 2030 and carbon neutrality in 2060, the "30-60" goals, together with the renewable development plans released in 2021. 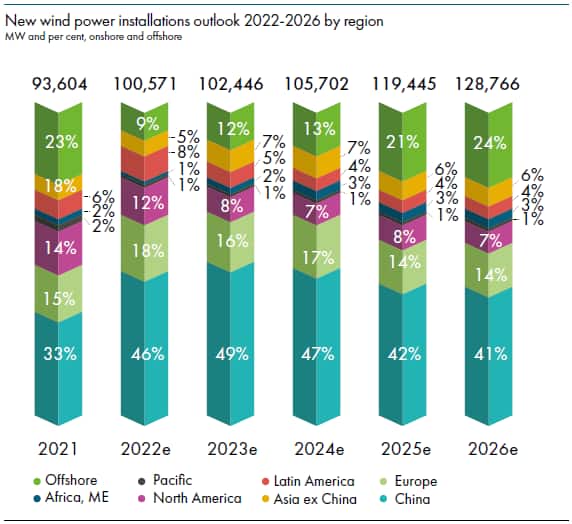 The CAGR for global offshore wind in the next five years is now 8.3%, GWEC said. Following an "outstanding" 2021, new offshore development in 2022 is likely to return to the 2019/2020 level, primarily due to reduced Chinese newbuild, it said. However, annual market growth is expected to regain momentum from 2023, eventually passing the 30 GW mark in 2026, it added.

Meanwhile, 2022 is likely to be another record year for European onshore wind, driven by the economic recovery following the COVID-19 pandemic as well as market growth in Germany, Sweden, Finland, France, and Spain plus non-EU 27 markets such as Turkey. After this peak, the average annual installations in 2023-2026 will drop to the level of 17.4 GW but will remain stable, the trade group said.

Last year was the second-best year ever for the wind industry, with some 93.6 GW of new onshore and offshore capacity brought online, although the total was 1.8% below 2020's record. That 12% growth total took cumulative installations to 837 GW.

The onshore wind market added 72.5 GW worldwide, a 18% year-on-year decrease from 88.4 GW a year earlier, GWEC said. The offshore wind market enjoyed its best-ever year in 2021, with 21.1 GW commissioned, or three times the previous year's total, GWEC data show. China's "mammoth" year of 16.9 GW of offshore installations accounted for 80% of that growth, it said, as China replaced the UK at the top of the table for cumulative installations. The UK had held top spot since 2009. 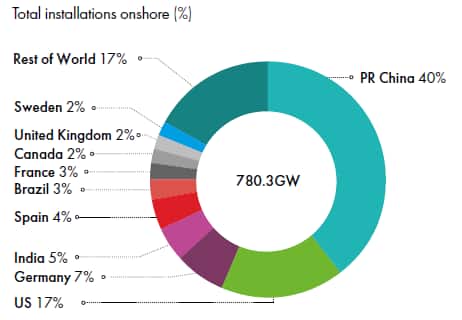 The world's top five overall markets in 2021 for new installations were China, the US, Brazil, Vietnam, and the UK. These five made up 75.1% of global installations last year, 5.5% lower collectively than 2020.

The top five markets in terms of cumulative installations as of the end of 2021 remained unchanged, GWEC said—China, the US, Germany, India, and Spain. Those five nations accounted for 72% of the world's total wind power installations at the end of last year.

GWEC Head of Strategy and Market Intelligence Feng Zhao said the termination of China's Feed-in-Tariff (FiT) led to a 39% drop in installations to 30.7 GW as "the market caught its breath" following a rush to install capacity before the incentive expired.

China's wind industry is entering a "new era" after a decade of rapid growth, GWEC said. Support for renewables has shifted from a FiT model to a "grid parity" model, where renewable-generated electricity will receive the same remuneration as coal-fired power plants.

From 1 January 2021, all onshore wind projects shifted to the latter model, and from 2022, the central government will cease subsidies for offshore wind, although some support will be offered by provinces like Guangdong and Zhejiang for the next three to four years to support the journey to grid parity by 2025. In certain sea areas, the government is confident that grid parity can be achieved even before 2025, GWEC said.