India is investing heavily in natural gas and renewables to meet the twin challenges of meeting the power needs of its rapidly growing population with electricity and meeting its Paris Climate Agreement obligations.

At the same time, Modi said India is committed to expanding energy access while abiding by its commitment under the Paris Climate Agreement to reducing its greenhouse gas (GHG) emissions intensity by at least 33% by 2030 compared with 1990 levels.

With a population of 1.35 billion, India is the world's third-largest emitter of GHGs, after China and the US.

"For instance," Modi, said, "India is the third-largest and the fastest-growing aviation market, in terms of domestic aviation. Indian [oceangoing cargo] carriers are projected to increase their fleet from 600 to 1,200 by 2024."

Referencing in his comments seven horses driving the chariot of the Hindu sun god, Surya, Modi said India's energy map will be transformed by:

COVID-19 will make achieving those goals more difficult, acknowledged Manoj Jain, chairman and managing director of state-owned oil and gas company GAIL India Ltd., in a panel discussion at the October conference, "Growing share of gas in India's energy mix: What is realistic?"

But Jain said the recovery is well underway. "Energy demand in India returned to peak [pre-COVID] levels in September," he said, and LNG imports are on track for a slight increase compared with 2019.

Importantly, the country stayed the course on the policies needed to create the transformation, Jain said, even while actual projects were delayed by the pandemic. "This was the time when [the government] could not do it on the ground, but did it on the policy front," he said, by continuing reforms to bring more market discipline to energy production and use.

The year 2020 saw the commissioning of two LNG import terminals, which increased the country's processing capacity to 40 million metric tons/annum (MMtpa). In November 2020, GAIL completed the Kochi-Mangalore Pipeline project, which Jain said "will debottleneck" the Kochi LNG terminal so it can operate at its 5 MMtpa design capacity. IHS Markit data show it operated at just 21% of capacity in July through September 2020.

The gas pipeline network also was expanded in 2020, bringing large volumes of gas to the eastern and southern parts of the nation for the first time, Jain said. "The next three to four years, we will double [the length of] the national pipeline grid to 55,000 km," he said, at a cost of about US$13 billion.

Even with the challenges of COVID-19 in 2020, India's long-term potential for LNG is very strong, said fellow panelist Meg Gentle, who was the president and CEO of US-based Tellurian LNG until late November. "The market has the potential to grow about 120 MMtpa," Gentle said. "In August, India became the third-largest importer of LNG in the world. It could be the largest by 2030."

GAIL is currently the largest of buyer of US LNG in India, and Jain said the government's goal of 15% gas in its energy mix by 2030 will result in a tripling of demand for gas by 2030. "Domestic [gas] production is only 15-20 [MMtpa], and the rest must come from the international market, including LNG," Jain said.

Gas demand growth in India will come from many sources, including LNG, Jain said. The heavy-duty trucking sector alone eventually could be responsible for 10 MMtpa of LNG demand. In addition, Jain said, natural gas will serve as a reliable backup source of power as the nation's renewable capacity grows, but leaves it vulnerable to periods when those intermittent sources are not available.

This is where US LNG comes in. The US is ideally suited to meeting India's demand for LNG, said Gentle, as new trains are coming online at US facilities, and the liquefaction plants have access to large volumes of inexpensive gas. "The cost of gas in the US is less than $1.50/MMBtu at the wellhead, so [with liquefaction costs] LNG can leave the US at less than $3.50/MMBtu and be delivered to India at less than $5.00/MMBtu," she said.

While $5.00/MMBtu LNG is significantly less expensive than forecasts of a few years ago, others active in India's energy market, as well as analysts, say the country's energy transition needs to be kept in perspective.

While agreeing with other panelists that coal use in India will be challenged on policy and environmental grounds, Thrasher predicted "an evolution, albeit over time…. I don't see coal disappearing, and I don't see gas disappearing for a long time."

IHS Markit came to the same conclusion in a December 2020 analysis, "India's new renewable power targets: How feasible are they?" by Research Analyst Simran Dua and Director Steven Knell. "The message from our outlooks is that while policy support for renewables drives solar and wind additions, more policy support is needed to incentivize higher levels of additions sooner while retiring more coal assets ahead of schedule," they wrote.

IHS Markit ran two scenarios. In the "Rivalry base case," it anticipates 325 GW of new power installations from 2020 to 2030, of which non-hydro renewables account for about 200 GW, and coal represents about 100 GW. Due to a relatively slow rebound from the pandemic, this represents a significant shortfall compared with the country's stated target of 450 GW of added renewable power by 2030.

However, in another scenario, "Autonomy," India's economy recovers more quickly, with power demand doubling by 2030. Governmental support and private investment in renewables enable installation of 348 GW of new non-hydro renewable power, and coal contributes only about 40 GW, as the country's path towards more sustainable energy is clearer under this scenario. 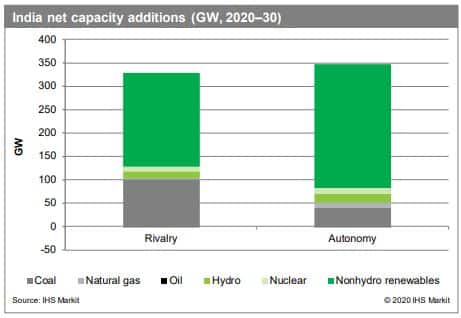 "I think there's a mistake in North America and Europe in thinking that the energy transition is only one thing. In India, it's two things: the movement towards cleaner energy that is provided by renewables…but it's also a transition away from using traditional fuels for indoor cooking," he said.

Propane (liquefied petroleum gas) is the primary solution to the problem in the short term, and the expansion of the gas pipeline network is key to a longer-term solution, Dharmendra Pradhan, Minister of Petroleum and Natural Gas and Minister of Steel, told Yergin in a forum discussion session titled, "New Map of Energy for India."

"We have about 280 million LPG consumers, and 80 million of them are 'the poorest of the poor,'" he said, a group that the government has targeted for free propane distribution. During the height of the COVID-19 lockdowns in the spring, he said the ministry was distributing 5 million cylinders of LPG per day.

The country's economic reforms go hand-in-hand with a post-pandemic recovery and the transition to a lower carbon future, added Rajiv Kumar, vice chairman, National Institution for Transforming India. "For 2022, we hope GDP will exceed 2019, as recovery is underway… [and] infection rates are low and recovery rates are high," he said.

The recovery plan includes liberalization of markets to encourage investment and innovation, he said. For a company such as GAIL Ltd., this translates to building a network of at least 150 LNG refueling stations on the nation's highways to support transitioning heavy-duty trucking to LNG use.