Wind turbine prices are set to continue to increase for customers worldwide in 2022 and beyond, as cost pressures and supply chain issues take an elongated toll after years of declining prices, manufacturers said in recent days.

The increase in prices comes as installations ramp up across the globe. IHS Markit expects onshore and offshore turbine capacity installations to top 78.3 GW in 2022 and reach 92.5 GW in 2025. The International Energy Agency expects wind capacity additions to total 80 GW in 2022.

Manufacturers are buoyant on the prospects for the market.

"Provided the macro environment evolves as encouragingly as expected, we continue to see good prospects for our products," José Luis Blanco, CEO of German turbine maker Nordex, said in a statement 18 January announcing a 32% year-on-year increase in orders in 2021.

Initial price hikes followed a rapid decrease in prices in the past few years. The cost of onshore wind power fell 40% in latter half of the 2010s, according to BP Chief Economist Spencer Dale. More recently, wind turbine prices fell by more than a sixth on average in Europe since 2017, according to data from the continent's biggest original equipment manufacturers (OEMs). 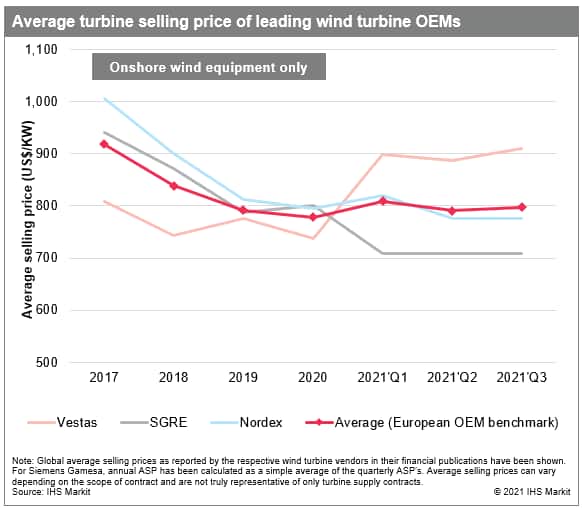 But prices are now on the rise, and that trajectory is set to continue, the OEMs say, as their costs increase and COVID-19 pandemic-induced bottlenecks snarl supply chains worldwide.

Data from market leader Vestas illustrates this trend. The company's average selling price increased to €830,000/MW for 2021, it said in earnings released 26 January, with onshore turbines costing €810,000/MW, and the price averaging €860,000/MW in just the fourth quarter. The company declined to say what its sales price averaged in 2020. Vestas' order intake totaled nearly 13.9 GW in 2021.

Vestas expects costs to continue to rise through 2022 and beyond, it said, with a knock-on impact on turbine prices. The company expects an increased impact from cost inflation related to raw materials, wind turbine components, and energy prices.

Price increases are needed, General Electric argues, because its renewables unit is losing money on turbines outside of its home market. Parent company Chief Financial Officer Carolina Dybeck Happe said during the call that the company's non-US onshore margins were negative, but margins improved in the company's home market, where it is the top-ranked provider.

General Electric said in an earnings statement that the value of GE Renewable Energy's full-year 2021 turbine orders totaled $18.2 billion, up 11% year on year.

Delays and increased costs are putting pressure on margins throughout the entire industry, a spokesman in Germany for Nordex told Net-Zero Business Daily. As is the case with all turbine OEMs, Nordex is increasing prices in order to reflect higher costs more appropriately, the spokesman said.

During some negotiations recently, the company—whose top onshore markets for new orders in its 2021 financial year were Sweden, Brazil, the US, and Canada—raised its prices two or three times, he said. The company, whose onshore business accounted for 52% of its 2021 order book, is also including greater risk contingencies in contracts with customers, he added.

During the call, Nauen said the company no longer expects the market to normalize by the second half of the company's 2022 financial year (which ends 30 September) when it comes to supply chain and logistics disruptions, adding that maybe the company was too optimistic previously.

The company's first quarter, which ended 31 December, saw late deliveries, material shortages, breaches of supply contracts, and higher procurement and logistics costs, he said. There is a lot of volatility in the market, he added.

The cost increases behind the price hikes span materials, freight, labor needs coming out of the pandemic, and geopolitical risk among other things, sources say.

The current situation is unique, IHS Markit Senior Analyst Indra Mukherjee told Net-Zero Business Daily. Turbine manufacturers are facing a world of cost pressures and other challenges at a time when the fundamentals for renewable energy—including wind—have never been stronger.

Rising material costs, not for steel, but for aluminum, copper, fiber glass, resins, and more have played a prominent role. The higher raw material prices are resulting in pricier bills for nearly all critical components, said Mukherjee, including towers, blades, power electronics, and foundations. 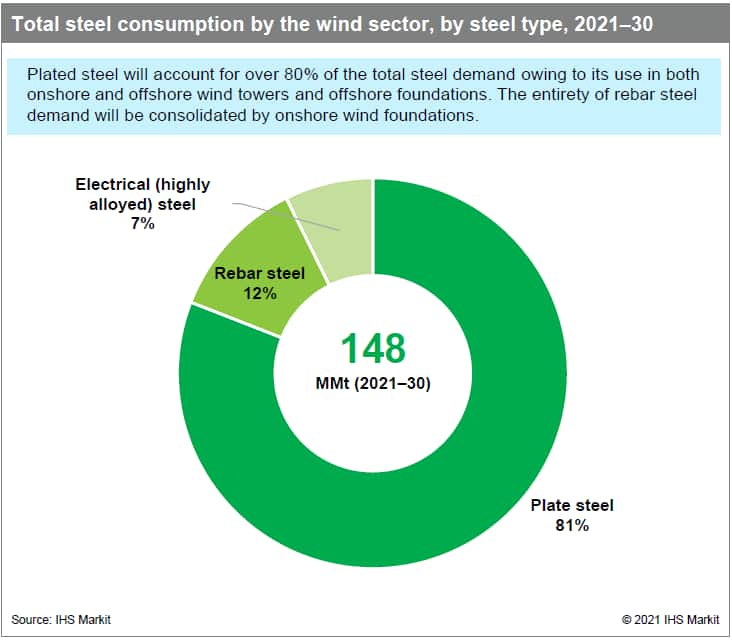 Top of the material costs list is the increase in steel prices. Steel accounts for 21% and 88% of the total mass of an onshore and offshore wind system, respectively, according to IHS Markit. The wind industry is expected to consume nearly 150 million metric tons (mt) of steel, worth close to $90 billion, through 2030, according to a December report from Mukherjee and fellow IHS Markit analyst Jason Sheridan.

Steel plate prices roared higher in 2021, as the graph below illustrates, and although a decrease is on the way, prices will still be over 25% higher at the end of 2023 than at the midway point in 2020.

Prices jumped because of a resurgence of demand following pandemic; shipping disruptions; reduced feedstock availability due to shipping delays and production outages; increased power prices and power outages, particularly in mainland China; and, trade tariffs and bans, such as the 25% tariff on steel imported to the US or a ban on Chinese imports of Australian coal, Mukherjee and Sheridan said in the report. 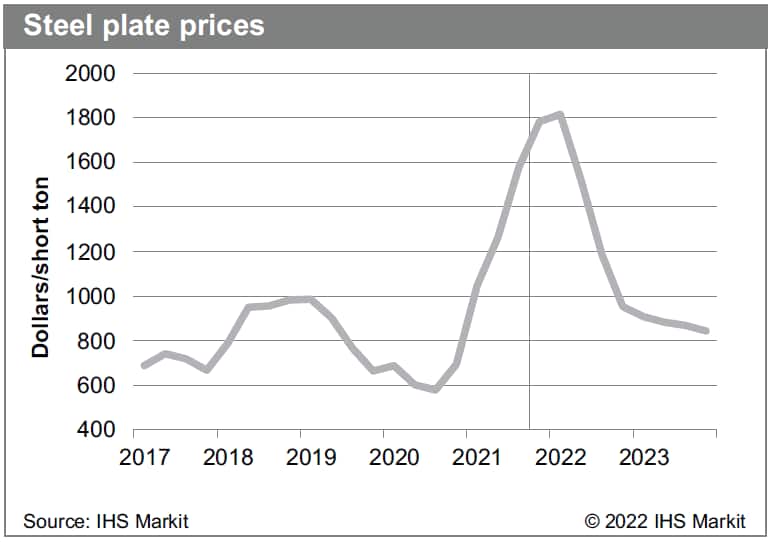 The supply chain instability caused by the pandemic, leading to increasing transportation and logistics costs, is expected to continue to affect the wind power industry throughout 2022, said Vestas.

This leads to difficulties in obtaining components. Due to the lack of availability of cargo ships, there are bottlenecks in the transportation of goods, the Nordex spokesman said. In addition, important ports are closed, so ships must be diverted to other ports, leading to an increase in voyages, he said.

Mukherjee told Net-Zero Business Daily that the wind sector faces a double whammy from freight rate escalations. OEMs are struggling not just to get smaller components to their manufacturing facilities, mostly via containerized cargo, but also get their finished components to project sites, he added.

Those problems can be multiplied if there are internal difficulties at individual companies, as shown by what's happening at Siemens Gamesa. The company's 5.X platform needed "necessary" design changes, affecting the production and project execution schedule, it said. The negative impact of the delays and changes in production plans is being exacerbated by the existing bottlenecks in the supply chain, it added. The company's supply chain issues are so bad it has had to adjust its financial guidance for the rest of 2022, cutting revenue expectations by as much as 2%.

Port congestion continues to significantly slow the circulatory movement of ships, containers, and other assets, according to Peter Tirschwell, IHS Markit Vice President, maritime and trade. Writing in a report released earlier in January, The Great Supply Chain Disruption: Why it continues in 2022, Tirschwell said the container shipping supply chain remains in the "deepest crisis" it has ever seen.

"As 2022 begins, the situation is not improving. We would like to be able say that we see signs of the log jam breaking. But frankly, we don't," Tirschwell wrote in the report. Spot container freight rates are three to five times those of a year ago, depending on the trade lane, he wrote.

Ongoing pandemic-related problems add yet another layer of uncertainty that could persist this year. Both Vestas and Siemens Gamesa have manufacturing facilities in the Chinese city of Tianjin. However, the city decided to test all 14 million of its citizens for COVID-19 after a number of the Omicron variant surfaced.