Global methanol production could increase five-fold by 2050, but only if half the total comes from a decarbonized "e-methanol" sector currently in its infancy, according to International Renewable Energy Agency (IRENA) estimates.

And petrochemical industry observers are extremely skeptical of the possibilities for such a ramping up of capacity, where the demand would come from, and how it would be funded.

In addition, such a jump would require unprecedented amounts of "green hydrogen" and a monumental scaling up of a sector that until now has lagged the other leg of the green methanol revolution—bio-methanol, which uses biomass as a feedstock rather than hydrogen produced via electrolysis as e-methanol does. Only one e-methanol plant is currently operational.

The possibility of such a transformation was unveiled in a study commissioned jointly by IRENA and The Methanol Institute, a global trade association. That scenario would see annual output soar to 500 million metric tons (Mt) in 2050 from the current 100 Mt, a figure that itself more than doubled over the past decade as the Chinese methanol-to-olefins sector boomed and natural gas supplies in the US soared on the back of the shale revolution.

The main methanol uses are as a petrochemicals building block, as a shipping fuel, and for fuel cells for road vehicles. Methanol is one of the four critical basic chemicals alongside - ethylene, propylene, and ammonia - used to produce all other chemical products.

Most Chinese methanol is produced using coal as the feedstock, whereas elsewhere in the world, it is mostly natural gas that is the feedstock. In either case, but especially when coal is the feedstock, methanol production is an energy-intensive process that gives rise to carbon emissions, so the sector is under pressure from companies and countries with net-zero commitments. 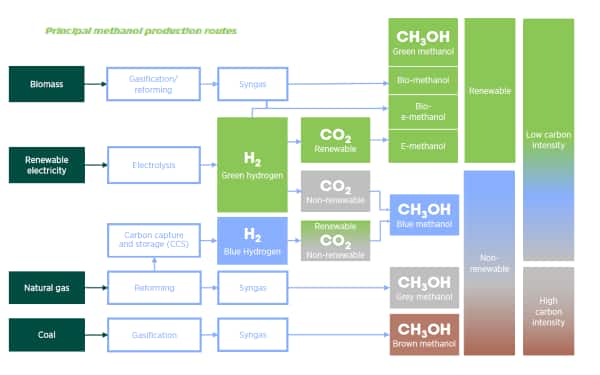 There are cost pressures in the brown methanol (see above) sector too. As gas supplies soared in the US, prices fell, and Methanex-the world's largest supplier of methanol-moved whole plants from Chile to Louisiana so they were close to feedstock gas from US plays such as the Permian Basin, Eagle Ford Shale, and Haynesville Shale.

Meantime, Carbon Recycling International's George Olah plant in Reykanes, Iceland, is the only commercially operational e-methanol plant. It uses geothermal energy for electricity, carbon dioxide (CO2) from the geothermal assets and hydrogen produced via water electrolysis. The output is used to produce biodiesel and for waste-water denitrification. It has an annual methanol production capacity of 4,000 mt.

E-methanol can be produced using CO2 captured from renewable sources such as bioenergy with carbon capture and storage (BECCS) and direct air capture (DAC), plus green hydrogen (hydrogen produced with renewable electricity).

According to the study's predictions, should that 500 Mt/year of capacity come to fruition in 2050, 250 Mt/year would be e-methanol and 135 Mt/year bio-methanol.

To produce such a vast amount of e-methanol would require about 350 Mt of CO2 and 48 Mt of hydrogen annually, according to the study. To produce this quantity of hydrogen through water electrolysis and assuming consumption of 50 MWh/mt of hydrogen produced, about 2.4 million gigawatt hours (GWh) of electricity would be needed. This would require about 275 GW of continuous electricity production, as well as 280 GW of electrolyzer capacity, according to the study.

The scale of the numbers in the forecast saw Philip de Smedt, lower olefins and aromatics sector head at the European Chemical Industry Council (Cefic) and a lecturer on how to design petrochemical plants, declare himself "baffled." De Smedt also said demand was unlikely to support such a jump.

The other big problem would be cost, especially for e-methanol plants, with even the study warning that its estimates would require a drastic decrease in costs across the board.

The cost of e-methanol depends to a large extent on the cost of hydrogen and CO2. The cost of CO2 depends on the source from which it is captured. The current production cost of e-methanol is estimated to be in the range of $800-$1,600/mt assuming CO2 is sourced from BECCS at a cost of $10-$50/mt, according to the study. If CO2 is obtained by DAC, where costs are currently $300-$600/mt, then e-methanol production costs would be in the range $1,200-$2,400/mt.

Some production of bio-methanol, the other arm of the green methanol drive, is already profitable as it is cost-competitive with its fossil fuel-based competition, Methanol Institute CEO Greg Dolan said during a January webinar to accompany the study's launch.

Bio-methanol is produced from biomass. Feedstocks include forestry and agricultural waste and by-products, biogas from landfill, sewage, municipal solid waste (MSW), and black liquor from the pulp and paper industry. Biomass and MSW feedstock costs vary between $0 and $17/Gigajoules (GJ). With a feedstock cost of up to $6/GJ, the cost of bio-methanol is estimated to be in the range of $320/mt to $770/mt, depending on the producer, according to the study, but the researchers argue that with process improvements, that cost range could become $220-$560/mt.

The big problem for bio-methanol would be feedstock availability, Cefic's de Smedt said during the webinar, as such demand would need too much land set aside to grow the mass required, especially when there are many competitors for the acreage around the world. Such skirmishes would echo the friction created by the revolution in the corn-based ethanol production sector as demand ramped up for the fuel due to regulatory requirements.

Another expected problem is financing. Capital costs for most advanced renewable fuel plants are relatively high and they remain difficult to finance, according to the study, whose authors cautioned: "Even projects that have successfully demonstrated their technology, and have mitigated and allocated all their risks (technology, commercial etc.) are having difficulty securing financing for commercial-scale rollout."

That's a big ask when the 135 million mt of bio-methanol envisioned by the study's estimates would require an investment of about $130 billion. Due to the nature of biomass and cost of collecting and storing the feedstock, a typical biomass-fed bio-methanol plant is assumed to produce 300,000 mt/year in the study's calculations. As a result, some 450 plants would be needed to reach the capacity prognostication.

In order to reach the capacity estimates, the study says there is a long shopping list of ingredients required, starting with ensuring investment throughout the value chain, including technology development, infrastructure, and deployment.

None of which are easy asks. Nor is the order of scaling up required. Paul Durrant, IRENA's head of end-use sectors and bioenergy, who moderated the webinar, said that scale was a challenge for all sectors in getting to net-zero targets, but there was no point in starting out timidly, not with the magnitude of the task ahead.