Meta unable to find enough US renewable PPAs to meet its needs: exec

Speaking at the American Council on Renewable Energy (ACORE)'s Finance Forum, Parekh said it is very difficult—even for the biggest player in the arena—at the moment to sign a PPA with a project that may have prices and costs that are going to be two or three years out of date when the electrons start flowing. She added that the whole power industry is worried about rising raw material costs.

Formerly known as Facebook, Meta set a goal of sourcing 100% renewable energy for its global operations in 2011 and achieved the goal in 2020.

The parent company of Facebook, Instagram, and WhatsApp has deals in place to buy 8 GW of renewable power, of which 5 GW is already operational, she said.

However, the company's electricity demand is increasing by 30% to 40% a year, said Parekh.

In May, Meta agreed to buy 112 MW of power from a wind farm an Algonquin Power & Utilities (APU) subsidiary is developing in Michigan. The project is expected to be online in 2023. Construction began in April. Meta already buys from an 80-MW solar farm the APU subsidiary, Liberty, owns in Virginia.

A month earlier in April, Meta inked a PPA with TransAlta for all the output of the 200-MW Horizon Hill wind farm in Oklahoma. Construction of the $290-million wind farm is due to begin in the fourth quarter of 2022 and it is expected to enter service in the second half of 2023, TransAlta said.

Meta was the biggest corporate buyer of clean power in the US at the end of 2021, according to American Clean Power Association data released in May (see graphic below). Amazon (2.58 GW) and Meta (1.91 GW) led the rankings for PPA deals announced in 2021, ACP said. A total of 128 entities announced PPAs in 2021, it added. 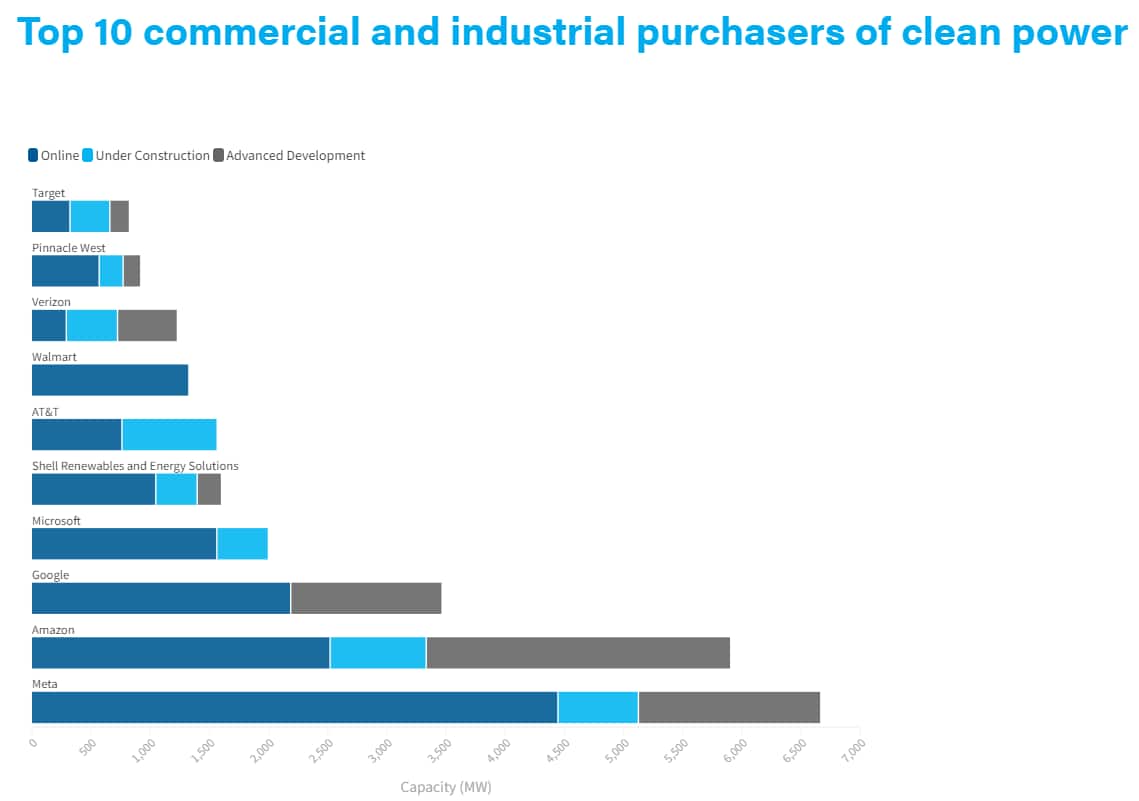 And for the first time, non-utility customers led US PPA announcements in 2021, accounting for 57% of clean power purchase announcements, ACP said.

But ACP said 24 May that PPA announcements saw a significant decline in the first quarter of 2022, decreasing 10% compared with the final three months of 2021 and 15% year on year. In Q1, companies announced 6.339 GW of new PPAs, ACP data show.

Corporate buyers were among those more hesitant to sign on to new clean power PPAs, the trade group said, citing supply chain issues and price rises. Commercial & Industrial (C&I) offtakers announced 3.31 GW of new PPAs this quarter, some 46% less than in 2021, ACP said. Verizon topped the C&I table in Q1 with 859 MW of new PPAs, it said.

The US renewable power market is "clearly in an unprecedented situation," as it deals with supply chain delays, the long tail of the COVID-19 pandemic's impact, and the Withhold Release Order on Chinese silicon-based products, according to Meghan Schultz, Invenergy executive vice president for finance and capital.

Speaking on the same ACORE panel as Parekh, Schultz said greater risk sharing across the various parties involved would benefit the whole market, she said, because at the moment all the project risk is attached to the developer.

A number of ways have been tested for improving risk sharing, said Schultz, including commodity indexation and inflation indexation. Without any certainty on long-term tax credits from the US government, it is hard to contract out more than a couple of years, she added.

Meta is in discussions with a number of project developers about whether they can meet their timelines as the supply chain chaos continues, Parekh said. Developers are approaching Meta about what changes can be made to contracts, she added.

The market doesn't build a lot of headroom into its contract negotiating, she said, but may need to do so going forward. Risk sharing hasn't been ironed out yet, she said, adding that greater flexibility on timing may be coming down the line. While each side wants greater certainty, both sides want the deals to go through, she noted.

Not just about price

However, buyers are not just concerned about price and capacity any longer, Patrick Taylor, principal program manager at Meta's fellow IT behemoth Microsoft. The Seattle-based company is the fourth largest PPA player in the US, according to ACP data.

"If there's a higher price, we want higher certainty," Taylor told the ACORE conference, but deals are going to go beyond price, considering instead the social impact. "We're all ears on innovative ideas," he said.

Microsoft is in a full out sprint to meet its corporate sustainability goals, said Taylor, adding that the pressure was coming from every angle. Microsoft is seeking to source all its power from renewable energy facilities by 2025.

In 2021, Microsoft announced its 100/100/0 vision, involving "100 percent of electrons, 100 percent of the time, are generated from zero carbon sources." The vision requires round the clock renewable power, which is not always easy due to the intermittency of wind and solar electricity.

In November 2021, the company inked a deal with power provider AES to source 24-hour renewable electricity for its data center in Virginia. According to the Virginia Economic Development Partnership, 70% of the world's Internet traffic passes through data centers located in the state of Virginia.

Beyond those goals, Microsoft said in 2020 it wanted to be carbon negative by 2030 and remove its historical carbon emissions by 2050.