Multiple projects are emerging around the world for renewable, or "green," ammonia, methanol, and hydrogen plants as the energy-transition drive gathers pace.

However, with large investments required over a sustained period to replace conventional production with green hydrogen-based alternatives—and the high estimated initial costs of the renewable power required—their economics remain challenging. A combination of greatly reduced costs for renewable power and advances in new production processes for the chemicals will be crucial to shifting to low-emissions production at competitive costs.

Ammonia is one of the most critical global commodity chemicals, with 75% of ammonia consumption worldwide necessary to support agriculture, and 25% for other industrial and consumer uses. Methanol is also vital, used directly in some applications and also as a raw material to produce numerous chemicals.

Conventional production of ammonia and methanol together accounts for more than 1% of worldwide GHG emissions.

The CO2 emissions per metric ton (mt) of product range from nearly 1 mt of CO2 for a natural gas feedstock plant, to over 3 mt for a plant using coal as its raw material. Global CO2 emissions from producing these two chemicals in 2019 are estimated to have been 350 million mt for ammonia and 100 million mt for methanol. Replacing gray ammonia and methanol with green raw materials would significantly reduce GHG emissions.

According to IHS Markit, analysis of present and future production costs indicates that green ammonia and methanol are both uncompetitive against their gray counterparts today. By 2030, as renewable electric power costs are expected to decline, green ammonia is likely to become competitive in North America. Green methanol, however, is expected to remain uncompetitive. These conclusions are based on the cash costs of production only, without including carbon credits or taxes, or regulatory mandates.

Over the last decade, the average total cost (the levelized cost of energy, or LCOE) of solar electricity generation over the lifetime of a project has dropped by more than 50%. Solar's LCOE is generally considered to now be on par with a typical gas-fired plant in North America, and it is likely to decline further over time. While this will help to make future production of chemicals with net-zero carbon emissions a realistic commercial reality, other issues will need to be addressed, including the intermittency of renewable power.

Commercialization of efficient green processes to produce chemicals, including ammonia and methanol, is expected to be transformational.

IHS Markit has assumed, for this analysis, the use of one of the most proven technologies for producing green hydrogen, combined with the existing conventional technologies to make ammonia and methanol. The analysis assumes the use of alkaline water electrolyzer (ACE) technology to make green hydrogen as feedstock for ammonia. Co-produced oxygen is assumed to be sold, providing an economic credit against production costs.

The green ammonia process modeled consists of three main steps: production of hydrogen by electrolysis of water; use of renewable power to produce green nitrogen; and production of ammonia from the renewable hydrogen and nitrogen via the conventional Haber process in a world-scale plant. Electricity is assumed to be available from solar facilities via an external supplier. Nitrogen for the process is produced by an air separation unit, powered by renewable energy.

The cost of renewable power for electrolysis of water for hydrogen production is the most energy-intensive step for green ammonia or methanol production. At an electricity cost of 4 cents/kilowatt-hour (kWh; estimated current LCOE) from utility-scale solar, over two-thirds of the total cash cost of producing green ammonia or methanol is attributed to power costs. At this price, the cash cost of producing green ammonia is estimated to be well above the costs of conventional producers in North America and globally. 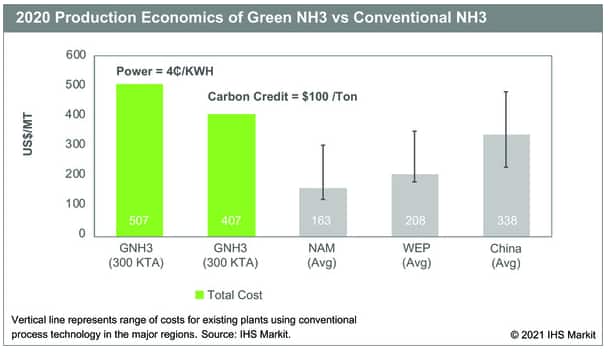 However, if renewable power costs decline to an LCOE of 2 cents/kWh by 2030, the cost economics for green ammonia are estimated to be competitive. 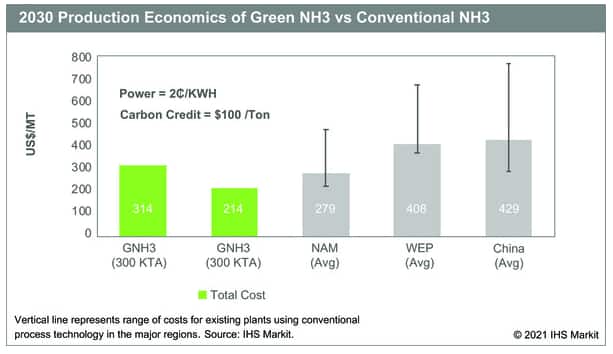 For green methanol, however, IHS Markit projects the economics remain infeasible based on the cash cost economics. Parity with gray methanol would require further advancements in electrolytic technology and/or implementation of a carbon tax credit of $100/mt or more.

This difference in the future prospects for ammonia and methanol is due to their basic chemistry. Producing green methanol via H2 and CO2 requires more hydrogen input than the conventional gray process. That additional requirement means a higher electricity consumption per ton of methanol produced.

However, questions have been raised about the emissions profile of blue hydrogen. A study published on 12 August in Energy Science and Engineering concluded that blue hydrogen releases almost as much CO2 as "gray" hydrogen without CCS. The reason, explained the researchers, is that "while carbon dioxide emissions are lower, fugitive methane emissions for blue hydrogen are higher than for gray hydrogen because of an increased use of natural gas to power the carbon capture."

As the analysis shows, the situation is complex. Aside from the large capital investments that will be required over time, future renewable power costs and the nature of the worldwide petrochemical industry's path to become net carbon neutral are critical issues for ammonia and methanol.