Keystone XL crude pipeline terminated due to US opposition

After more than a dozen years of planning and permit disputes, TC Energy said on 9 June it has terminated the Keystone XL pipeline that would have brought Canadian oilsands crude through the US to refineries on the Texas Gulf Coast.

The project, which would have transported as much as 830,000 b/d of crude across 1,200 miles, had been in serious doubt since 20 January, when President Joe Biden revoked the presidential permit that had been issued by his predecessor, Donald Trump, in March 2019. The Trump permit, which reversed a decision by Barack Obama in November 2015 to reject the cross-border permit, allowed TC Energy to begin construction in the US. 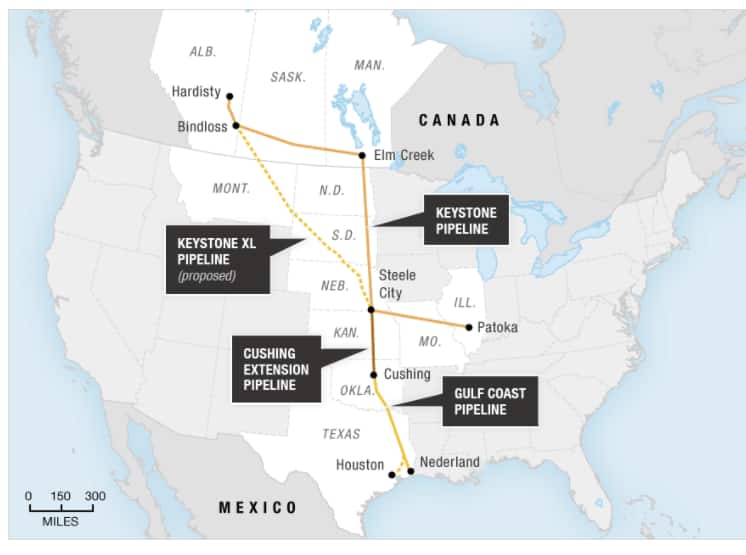 Revoking the permit was one of Biden's climate-related executive actions on his first day in office, indicating the approach the administration would take toward fossil fuel projects.

A few days before Biden took office, TC Energy announced a plan to make the pipeline fully powered by renewable energy and thus significantly reduce its GHG emissions, and to buy energy credits or carbon offsets for the balance of the emissions.

When that promise didn't seem to sway Biden or environmental groups that opposed the project, TC Energy said in May it was suspending construction activity and took a $2.2-billion writedown. In all, the project's estimated cost was about $8 billion.

In announcing the cancellation, TC Energy President and CEO Francois Poirier referenced the company's commitment to GHG reductions. "Through the process, we developed meaningful Indigenous equity opportunities and a first-of-its-kind, industry-leading plan to operate the pipeline with net-zero emissions throughout its lifecycle. We will continue to identify opportunities to apply this level of ingenuity across our business going forward, including our current evaluation of the potential to power existing US assets with renewable energy," he said.

For Canada's oil industry, the cancellation of the pipeline is a significant blow. Alberta Premier Jason Kenney said on 9 June he is "frustrated with the circumstances surrounding" the cancellation, which was to be a major new outlet for Alberta crude. The provincial government invested more than C$1.3 billion (approximately US$1.07 billion) in the project in 2020 to assist TC Energy with construction.

But the US opposition to moving oilsands crude shows the challenge that the resource has in the newly carbon-aware global energy market.

The industry is responding to that challenge, as IHS Markit noted the significant progress that producers have made. "In Canada, the carbon intensity of oilsands operations has been reduced by 20% over the past decade," IHS Markit wrote in a report last year.

Much more is coming, as the five producers who represent approximately 90% of Canada's oilsands production announced on 9 June the Oil Sands Pathways to Net Zero initiative.

"The goal of this unique alliance, working collectively with the federal and Alberta governments, is to achieve net-zero GHG emissions from oil sands operations by 2050 to help Canada meet its climate goals, including its Paris Agreement commitments and 2050 net-zero aspirations," said Canadian Natural Resources, Cenovus Energy, Imperial, MEG Energy, and Suncor Energy in a joint statement.

The plan is anchored by a carbon capture, utilization, and storage (CCUS) hub near Cold Lake, Alberta, into which several pipelines will deliver captured carbon for sequestration. "The proposed CCUS system is similar to the multi-billion-dollar Longship/Northern Lights project in Norway as well as other CCUS projects in the Netherlands, UK, and US, all of which involve significant collaboration between industry and government," the companies said.

In addition, the companies envision electrification of operations, energy efficiency, and process improvements to reduce and eliminate carbon emissions.

Canada has the world's third-largest oil reserves and stringent oil production regulations and standards. At the same time, it is one of the few countries with a national carbon tax, though its nationally determined contribution (NDC) under the Paris Climate Agreement is a relatively modest 30% GHG reduction from 2005 levels by 2030. Canada's Prime MInister Justin Trudeau announced in April at the Climate Leaders Summit that he intends to raise that commitment to 40-45% GHG cuts, but a new NDC has not yet been filed.

The Alberta government was among three provinces that sued to oppose the carbon tax, but the tax was ruled constitutional in March.

In the US, environmental groups applauded TC Energy's announcement and said that the Biden administration must continue its tough scrutiny of major hydrocarbon projects. "The cancellation of Keystone XL is a reminder that this project was never needed and never in the public interest, and that it is time for the fossil fuel era to rapidly come to a close," David Turnbull, strategic communications director with Oil Change International, said in a 9 June written statement.

Environmental groups also see the announcement as indicative of their rising strength in opposition to new fossil fuel projects. "The termination of this zombie pipeline sets precedent for President Biden and polluters to stop Line 3, Dakota Access, and all fossil fuel projects," Kendall Mackey, campaign manager of 350.org's Keep It in the Ground campaign, said on Twitter.

But the American Petroleum Institute (API) and the Global Energy Institute of the US Chamber of Commerce pointed out the jobs and economic development that the project would have generated. "It's unfortunate that political obstructionism led to the termination of the Keystone XL pipeline," Robin Rorick, vice president of midstream and industry operations at API, said.

Republicans in Congress blamed Biden for "killing thousands of good-paying American jobs." TC Energy had estimated 10,000-11,000 jobs would have been created during the height of construction. However, the company said that operation of Keystone XL would require only about 50 full-time-equivalent jobs, some in Canada.

Representative Kelly Armstrong, Republican-North Dakota, who represents the state through which much of the project would have traversed, called the termination "a win for environmental extremists and a loss for American workers. President Biden's rescission of the pipeline's permit in January was a signal to activists across the country that his administration will not defend American energy jobs and that their political attacks on energy infrastructure are OK with him."

The revocation was one of a number of actions in the January executive order, said Steve Weiler, partner at law firm Dorsey & Whitney. Biden suspended oil and natural gas leases in the Arctic National Wildlife Refuge (ANWR); directed federal agencies such as the Federal Energy Regulatory Commission and Bureau of Land Management "to capture the full costs of greenhouse gas emissions as accurately as possible" in environmental reviews and permitting decisions; and directed all agency heads to "immediately review and … take action to address the promulgation of federal regulations and other actions during the last four years that conflict with these important national objectives." This month, the ANWR suspension was extended by Biden, pending completion of a comprehensive analysis of the National Environmental Policy Act.

"Given the Biden administration's all-government approach to combatting climate change, fossil fuel projects will likely have an uphill battle to obtain any required federal government permits or authorizations," Weiler said.

Two exceptions that Weiler noted are the Dakota Access Pipeline in the Upper Plains and Line 3 in the Upper Midwest. In those cases, the Biden administration has not stepped in to halt operation (Dakota Access) or construction (Line 3) of crude pipelines that have been the sites of protests by activists. In the case of Line 3, media accounts say that hundreds of protesters in Minnesota have been arrested in recent days.

When it comes to oil pipelines, the administration faces a set of competing challenges of environmental goals and economic growth. Line 3, for example, is an Enbridge project that would replace an existing 282-mile pipeline segment that was installed on the western edge of Minnesota in the early 1960s and is now showing signs of corrosion and cracking, with a new 340-mile pipeline, according to company filings with the state.

Environmentalists opposed the project, despite its safety benefits, because it would enable Enbridge to increase volumes to 760,000 b/d of crude (Canadian oilsands crude), compared with 390,000 b/d under currently restricted operations.

Environmentalists counter that the true GHG impact is more than 190 million mt per year, when the lifecycle impact of Canadian oilsands crude is taken into account.