Italian energy company ENI is considering spinning off its combined retail power and renewable energy activities through a public listing next year or selling a minority stake in them to capitalize on buoyant market conditions, it said 30 April in its quarterly earnings.

The announcement comes less than a year after ENI said the company's operations would be split into two units, one focused on oil and natural gas, and another on renewables and power.

If the spinoff occurs, ENI will take a similar path to energy service firm Aker Solutions, which created an energy transition-focused spinoff last year, and then this spring announced it was creating a hydrogen pure-play spinoff company. In another indication of the interest in renewables, in February 2021, Spanish oil company Repsol said it too was considering a spinoff of its renewables business.

"Reorganizing businesses into growth and value units is a common strategy for industries in transition, and that's what ENI and others are doing here," said Peter Gardett, IHS Markit research and analysis executive director. "I'd expect to see more companies choose this route of spinning off cleantech-led units, or be more deliberate about their plans to navigate the energy transition intact, as part of giving their investors clear choices."

ENI said in its earnings call last week that the division that could be spun off -- known as Gas e Luce, Power & Renewables -- generated a combined adjusted operating profit of €176 million ($212 million) in the first quarter of 2021, up 17% year on year, and Q1 adjusted earnings before interest, taxes, depreciation, and amortization of €260 million ($312 million). 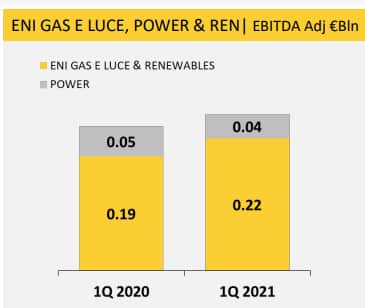 ENI is evaluating "multiple options to extrapolate the maximum value from this new entity during the course of 2022, subject to market conditions," it said in a statement. "Options under consideration include a stock exchange listing through an initial public offering, or the sale or exchange of a minority stake in the new entity."

The ENI unit accounted for Q1 retail gas sales of 3.52 billion cubic meters and for retail power sales to end-consumers of 3.65 TWh. Renewable facilities produced 117 GWh of energy in the quarter, three times as much as the same period a year ago, it said.

The company's installed renewable energy generation capacity amounted to 307 MW as of 30 March, including additions of 56 MW this year. Capacity under construction or at an advanced stage of development will add over 600 MW, mainly relating to the UK Dogger Bank A and B offshore wind project, in which ENI's share equates to 480 MW, and to new onshore wind and solar capacity in Kazakhstan.

In addition, the group plans to grow its installed renewable generation capacity to at least 5 GW by 2025, as part of its aim to reach carbon neutrality by 2050.

The interest investors have in renewables is driving the decision by ENI and others. As IHS Markit noted in a global energy outlook published in April, 90% of expected new global energy capacity through 2050 will be solar and wind power. "Further decarbonization of heating, transport, and industrial sectors -- driven by economy-wide net-zero carbon targets set by both national governments and corporations -- offer a significant upside potential to the growth of renewables," IHS Markit said.

"It has become increasingly clear that these businesses represent value creation opportunities in a world transitioning to green solutions at accelerated speed and have more potential as stand-alone companies than as an integrated part of an oil service business," said Chairman Øyvind Eriksen in announcing the plan last July. "Renewables and green technologies have entirely different value chains, customers, investor bases, and sources of funding. Capitalizing and separating the offshore wind and CCUS business areas from Aker Solutions presents a unique opportunity for growth and value creation."

Then in March 2021, the company followed up with another spinoff: Aker Clean Hydrogen (ACH). It said it hopes to raise about $350 million in a private placement and list shares publicly as well.

ACH has 1.3 GW of renewable power under development to support production of green hydrogen, and will use the proceeds from the placement to reach a target of 5 GW of power by 2030, it said.

Repsol will not likely make a decision on a spinoff until 2022, but in February it confirmed news reports that it had hired JPMorgan to advise it on a strategy for renewable power operations.

The company said in November 2020 it will invest $5.5 billion from 2021 through 2025 to expand its renewable generation capacity to 5.2 GW. This would represent an increase of nearly 50% compared with its current renewables capacity (including hydropower) of 11 GW.

By 2025, Repsol said it intends to have 400 MW of renewable power dedicated to producing green hydrogen in Spain, and may possibly triple that output by 2030.

However, not every energy company is seeking the quick strike in renewables. Patrick Pouyanne, CEO of France-based major TOTAL, told investment analysts in February he believes the company is stronger as an integrated unit.

"And let's be clear, if we transform TOTAL into TOTALEnergies, it's not suddenly to spin off the 'Energies,' and to come back again, [as] TOTAL," he said. "So, I think we want to be — we know that we need to be patient. We know what we need to deliver. Even if today, all these renewable companies are more [valued] on their potential of growth rather than the cash flow they deliver."

Later, he added: "It's a question for me of integration of the oil value chain, and we keep that in the model and don't need to divest to make more in the renewables."

TOTAL's decision doesn't surprise IHS Markit's Gardett. "Some investors will be more comfortable with the risk and the matching opportunity profile of a cleantech-led business, and others will want the transparency and relative stability of a legacy energy business with strong cash flow and a long operating history," he said.