India is set to install nearly 20.2 GW of wind power capacity through 2025, raising capacity in the world's fourth-largest wind power market by more than 50% from the 39.2 GW currently up and running, according to a study released 10 June.

The study, published by the Global Wind Energy Council (GWEC), and titled India Wind Energy Market Outlook 2025, found a 10.3-GW pipeline of projects in federal (or central) and state markets is expected to drive installations until 2023.

After 2023 though, growth is likely be pushed forward by almost 10 GW of capacity awarded to wind projects through mainly hybrid tenders, it said. Hybrid tenders combine wind and solar in an effort produce a higher capacity utilization factor.

While GWEC expects installed Indian wind capacity to total 59.4 GW at the end of 2025, it said there is a chance under an "ambitious case projection" model that as much as 62.9 GW of capacity could be up and running by that point.

If India wants to unlock its full wind energy potential, the government must boost consensus and coordination among agencies "with a consistent and aligned market roadmap," particularly when it comes to size, frequency, and composition of tenders, GWEC said. Also, technology exchange promotion and alignment to the global supply chain will encourage a manufacturing base, it added.

The Indian government set a 140 GW target for installed wind capacity by 2030.

This is one part of a strategy, outlined over the last year, in which the country seeks to decarbonize its coal-reliant power sector. At present, coal supplies 44% of the country's energy demand, oil provides 25%, solid biomass 13%, natural gas 6%, and hydropower and wind/solar each provide about 1%.

India has a huge untapped potential for wind generation and manufacturing, GWEC India Policy Director Martand Shardul said in the report, adding that "the evolving Indian energy market will be key to the success of the world's future energy technologies."

Cost won't be a barrier, the report argues. On average, the Indian wind levelized cost of energy—the cost of power generation over the lifetime of the facility—is roughly 35% lower than most coal plants in the country, it said. In addition, the government made financing incentives available in 2020 as a result of the COVID-19 pandemic.

The impact of COVID-19 lockdowns on India's wind energy market was more severe than anticipated, GWEC found, with only 1.1 GW installed out of the 3.3 GW originally forecasted for 2020.

But the pace of installations is forecast to double in the next two to three years compared with average annual installations since 2017.

"It is encouraging to see the market beginning to bounce back, but to drive a post-pandemic green recovery and realize its climate goals, India will need to adopt a more aggressive climate emergency approach and set clear short-term milestones to enable an even more rapid uptake of wind projects," Shardul said in a statement accompanying the release of the study.

Under the ambitious scenario, nearly 24.4 GW of volume would be installed by the end of 2025, driven mostly by high demand for price-competitive hybrid auctions across India and all the projects in the pipeline being built.

IHS Markit expects the renewable generation total to be 125 GW by the end of 2022.

In 2020, India added about 8.5 GW of total capacity, compared with 21 GW in 2019, according to the report, a first-quarter Indian power and renewables market briefing.

In 2021, India is expected to add about 23 GW of net capacity, the majority of which will be renewable capacity, but supply chain and PPA signing challenges may delay projects, the IHS Markit analysts said in the report.

Energy use on the rise

India is the world's third-largest energy consuming country, thanks to rising incomes and improving standards of living, according to the International Energy Agency (IEA).Energy use has doubled since 2000, with 80% of demand still being met by coal, oil and solid biomass, the IEA added.

The IEA expects solar photovoltaic generation capacity to jump in India through 2040 as well as wind, it said in a report on India's power sector prospects (see graph below), and coal-fired plants' dominance to wane. By 2030, the IEA expects wind and solar to account for 40% of total installed capacity in India. 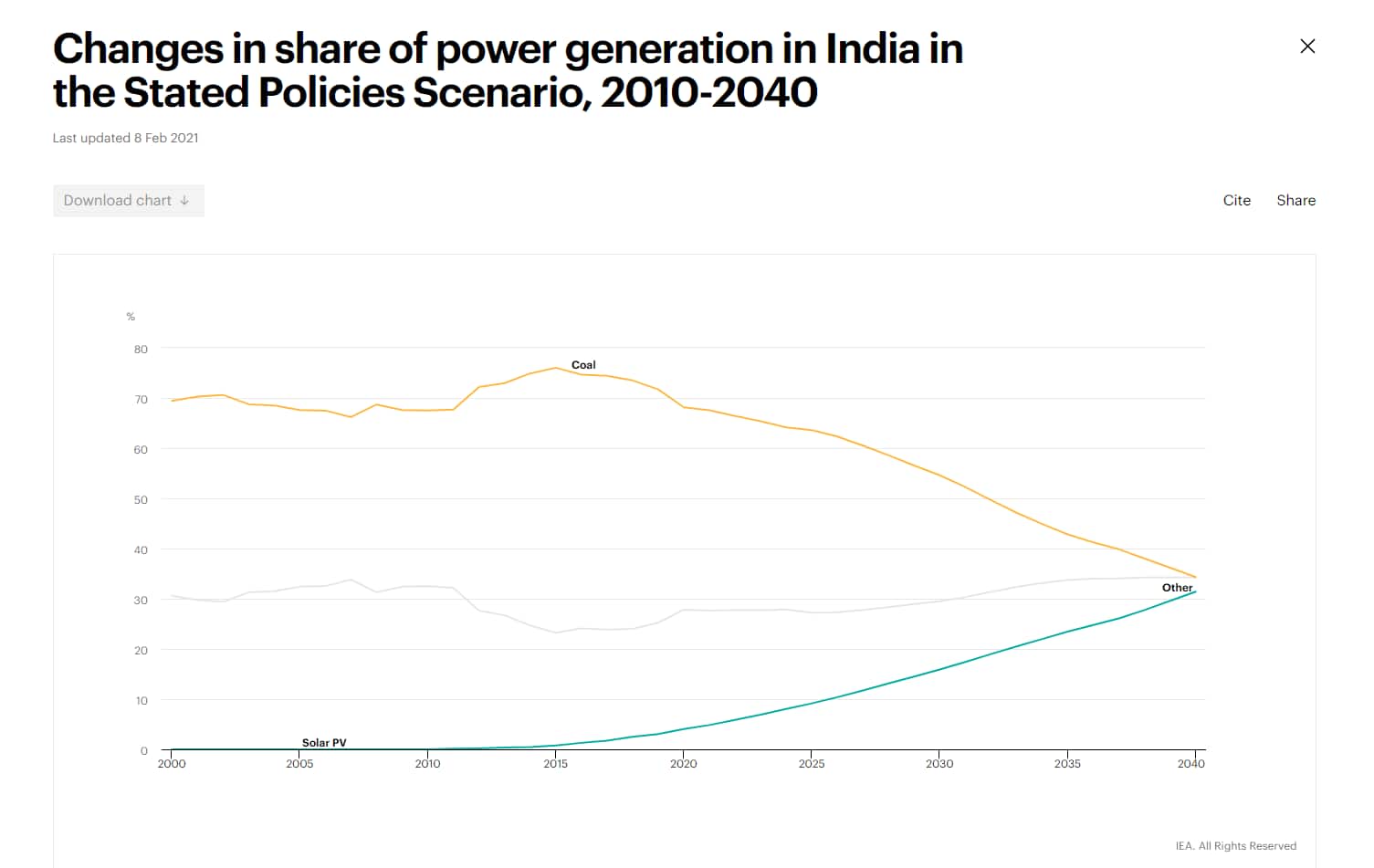 By the end of 2019, solar and renewables constituted nearly 20% of Indian installed capacity, according to the IEA. Under the IEA's baseline expectations, India will add nearly 900 GW of wind and solar capacity through 2040, with 200 GW of that wind.

Speaking at CERAWeek by IHS Markit in March, Amitabh Kant, chief executive of the National Institute for Transforming India, said the country's energy demand will double in the next 15 years.

Beyond 2025 and onto 2030, GWEC said the long-term drivers for growth in the Indian wind market will be repowering of onshore wind capacity, potential for offshore wind projects, the shift toward carbon neutrality, and growth in the manufacturing base.