S&P Global has developed a new, comprehensive methodology to improve assessments of the life-cycle GHG intensity of crude oil.

When applied to the US crude slate in 2019, S&P Global found the GHG intensity of crude oil processed was 84 gCO2-equivalent/MJ (457 kgCO2e/bbl) of refined product, from production through end use.

The study, The Right Measure, builds on existing literature, standards, and practices to address some of the challenges that currently limit the utility of life-cycle GHG emissions estimates of crude oil, S&P Global said in announcing the new methodology on 22 March.

"Not all GHG emissions estimates of are created equal," said Cathy Crawford, director, GHG estimation and coordination, S&P Global and co-author of the study. "Understanding GHG emissions can require data that may not have historically been gathered or reported across companies and regions, which affects the quality of estimates."

"What the market has been looking for is a credible and equitable yardstick when it comes to assessing oil and gas GHG emissions," said Daniel Yergin, vice chairman, S&P Global. "This study advances several of the critical building blocks needed in the market while also being very transparent where some of the challenges remain."

"Each source of inconsistency was systematically reviewed, and specific guidance was developed that addresses the core areas where differences continue to exist between estimates," explained Kevin Birn, vice president, GHG estimation and coordination, S&P Global, and the study co-author.

While Birn emphasized that the creator of a methodology might have "perfectly reasonable reasons" for selecting what to measure and how to measure it, the collective result is that the differentiated methods make it hard to compare emissions estimates across studies. For some key areas in which methods differ significantly on their estimates of emissions (or lack them at all)—such as upstream land-use changes, or fabrication and construction of oil and gas infrastructure—new guidance has been issued.

The study also yields a new framework to improve the transparency around the reliability of estimates, known as the Data Quality Metric (DQM). It was developed in collaboration with the US Department of Energy's National Energy Technology Laboratory.

DQM advances the state-of-the-art in how the quality of the data can be understood by users, such as third-party verification services. Through a simple letter-scoring system, users can identify the reliability, representativeness, and utility (ease of obtaining and interpreting) of the data itself.

"Data quality really does matter, and it is a source of differentiation between estimates which has been unappreciated," Birn said. "The creation of the Data Quality Metric has the potential to be a meaningful tool for GHG estimators, from companies to third parties, to allow users to assess the uncertainties and limitations of different GHG estimates."

To show how the new methodology can be applied, S&P looked at the crude slate processed by US refineries in 2019.

In all, 48 distinct crude oil streams were analyzed, representing approximately 90% of the volume that was processed, or more than 14 million barrels per day. Combined on a weighted-average, their 84 gCO2e/MJ life-cycle estimate is significantly lower than many other studies, S&P noted. 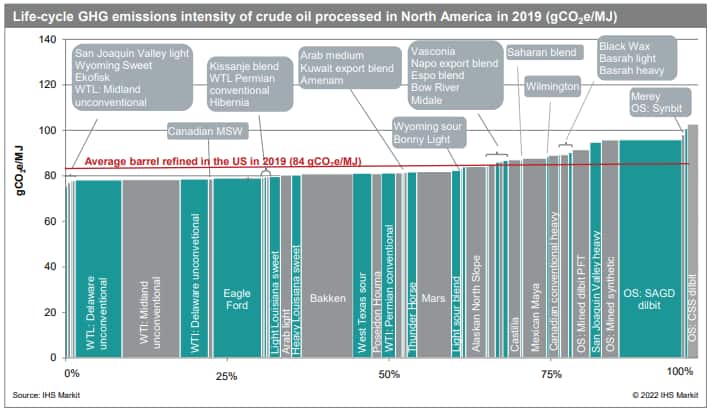 The US crude slate has changed over time, and operators are focused on lowering emissions. "The understanding of reservoir characteristics of US unconventionals has improved while production techniques were refined. In Canada's oil sands, utilization rates increased, while new less GHG-intensive operations came online," it said.

The estimation of the US average leveraged a new upstream analytical tool developed by S&P Global. From this tool wide variation within oil plays was found, highlighting that overreliance on averages can be misleading, Birn said.

According to a high-end estimate of methane emissions, the total US average reaches 88 gCO2e/MJ. An agreed understanding of methane emissions could affect the assessment of individual crudes against the average, as the analysis found that crudes from Venezuela, Nigeria, and Algeria are considered especially methane-intensive by the International Energy Agency.

This type of information is valuable at a time when the industry's GHG emissions could face greater scrutiny than ever before. "Companies and asset owners would presumably have access to more comprehensive data sets and be advantaged in being able to produce the most reliable and representative GHG intensities for their own assets," S&P Global said.