Scaled back oil and natural gas production in 2020 due to low prices and the COVID-19 pandemic led to an anticipated reduction in global methane emissions of 8-10%, according to numerous researchers, and new analysis of the global methane problem proposes strategies for making that unexpected, isolated event the new normal.

"This magnitude is required every year for the next decade" for the world to be on track to meet the goals of the Paris Climate Agreement, said Christophe McGlade, International Energy Agency (IEA) senior analyst.

"But is that realistic?" McGlade asked during an IEA webinar on 18 January to discuss its report, "Driving Down Methane Leaks from the Oil and Gas Industry."

IEA's investigation suggests that it is realistic and urgently needed, he said.

Methane emissions from the oil and gas sector are estimated to have totaled 70 million metric tons (Mt) in 2020, or about 5% of global energy-related greenhouse gas (GHG) emissions, IEA said.

"This 70% reduction coincides with the amount that would be technically possible to abate, according to the IEA 2021 Methane Tracker," Tim Gould, head of the IEA Division for Energy Supply and Investment Outlooks, told the webinar audience. "In addition, a significant share of these emissions can be abated at no net cost, because the value of the captured methane is sufficient to cover the cost of the abatement measure, i.e. there should already be an economic incentive to avoid the release of this gas to the atmosphere."

The pay-for-itself benefits are behind the success of voluntary programs such as the US Environmental Protection Agency's Methane Challenge or the United Nations' Environmental Partnership Oil & Gas Methane Partnership, Gould said. But that has not driven change quickly enough.

IEA's report, based on interviews with leaders of energy companies and government agencies from more than 50 countries, found that a lack of information, infrastructure, and financial incentives are barriers to wide adoption of necessary methane-reduction technologies.

Government regulations and incentives can help to overcome those barriers, Gould said. "Experience shows that countries can take an important first step today based on existing tools, which may include prescriptive requirements on known 'problem sources,' combined with monitoring programs that seek to detect and address the super-emitters," Gould said.

One study of super-emitters (those few but high-emission sites, often caused by equipment malfunction) by Stanford University found that 5% of methane leaks in the US were responsible for 50% of methane emissions. "These leaks may not last for long, but while they last, they are very damaging," he said.

Overall, Russian and US oil and gas operators are the world's largest methane emitters (see graph below; all graphs from IEA and used with permission).

Based on feedback from stakeholders, IEA has developed a 10-step "regulatory roadmap" for methane reductions. The roadmap starts with identifying the scope and scale of methane leakage in a nation, in order to develop a country-specific emissions profile. With that knowledge and outreach to all stakeholders, appropriate regulations can be developed. And then, those regulations must be enforced and regularly updated.

"One thing that's become clear with every iteration of our Methane Tracker is the variation of performance by country," Gould said. "The striking thing is the difference in [methane emissions per unit of production or methane intensity] varies by a factor of more than 100 by country. On the one hand, this is a depressing message because it shows needless waste and damage … but it's also promising that huge and rapid improvement in performance is possible."

Just as methane emissions differ by country, they differ by sectors of oil and gas production and transportation (see graph below). Policies should target areas with the highest potential for quick reductions, he said. 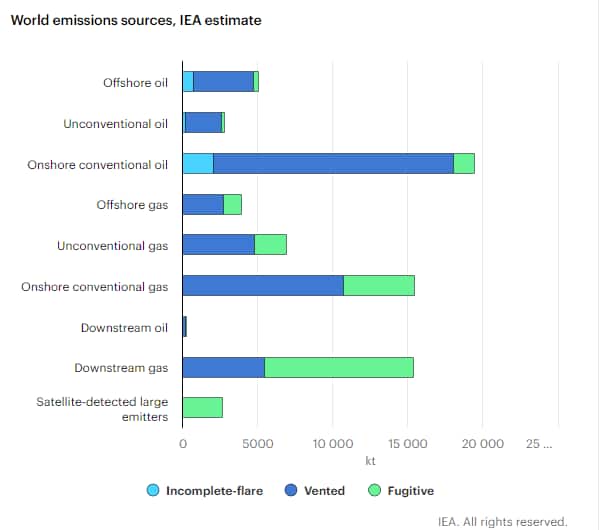 For individual countries, however, questions of cost-effectiveness also must be taken into account. While IEA has found that some projects yield no-cost abatement, Gould pointed out that volatility in oil and gas prices makes this a moving target. For 2020, due to low gas prices, only about 11% of abatement technologies were operating at zero cost—that is, producing enough gas to offset their implementation (see graph below).

In 2019, a more typical year, about 40% of technologies were functioning at net-zero cost, he said. "This underlines the importance of policy initiatives so that abatement is not undermined by varying prices," he said.

"The lesson you can take is that [when] companies [are] really engaged in methane reduction … they find that it is more cost effective and they are able to reduce methane emissions more than they anticipated. We view this as very positive signal on what is possible," McGlade said.

Stakeholders told the IEA a combination of policies will be needed, tailored to local conditions. "It's very clear that you must devise different regulations in an economy dominated by a national oil company than one with many private competitors," McGlade said. "Either way, political buy-in is crucial."

A sense of urgency also emerged from the discussions. "A question we encountered many times in this regulatory work was, 'What can we do in the absence of good methane data?'" McGlade said. "One of the things we would like to emphasize is that effective policy tools exist and can be implemented now—even without complete and accurate methane information. Some prescriptive command-control measures can be implemented without such data, and they can be powerful."

Leak-detection-and-repair programs to identify large fugitive leaks from pumps, pipelines, and other equipment are examples of prescriptive control measures used with success in Australia, Canada, and the US, he said.

Over time, prescriptive measures can be complemented by "performance-based" standards in which industry is given an emissions target, rather than told how to reach it; this is the approach in Alberta, Canada, the largest oil producing province in the country. Another method is to impose what Gould called "economic approaches," such as the taxes on flaring of gas imposed in Brazil, Nigeria, and Norway. South Africa has taken another approach, a tax on methane emissions from industrial operations.

The challenge for economic-based rules is having accurate data, Gould said. "Flaring taxes can potentially be a very efficient approach…. It allows operators to seek out the most efficient opportunities. This type of regulation … works well for flaring when a government has good information on the amount of flaring and who is doing it, but it's less useful with fugitive emissions [from pipelines], where efforts are better placed on improving our data on emissions first," he said.

Data gathering is improving, thanks to satellite detection, and is beginning to provide information "in real time and with finer resolution," Gould said. It will soon be implemented for other sources of methane emissions, such as leaks from ships transporting LNG across oceans. "But satellites still struggle with some tracking, such as offshore operations in the Northern Latitudes. I think we're getting there, but we're not there yet on pinpointing one route for transport is better than another," Gould said.