Highlighting a major data gap for the potent GHG, the International Energy Agency (IEA) 23 February released a study concluding that global energy sector methane emissions are 70% higher than reported by governments around the world, with improved satellite monitoring showing large 2021 releases in the Permian Basin and central Asia.

The IEA also said methane leaks from natural gas infrastructure can be reduced at almost no cost to producers, making the increase in methane emissions during 2021 "all the more striking given today's backdrop of very tight and volatile gas markets."

Figures in the Paris-based watchdog's Global Methane Tracker study are based on the latest studies and monitoring of energy sector operations showing numbers higher than what is provided in nations' official data.

"As more measured data becomes available, it becomes ever clearer that almost all the national inventories have been underreporting emissions," the agency said.

Methane is responsible for around 30% of the rise in global temperatures since the Industrial Revolution, meaning quick and sustained emissions reductions are key to limiting near-term warming, the study said. It dissipates faster than CO2, but is a much more powerful GHG during its lifespan, "meaning that cutting methane emissions would have a rapid effect on limiting global warming."

The report does not include emissions from abandoned oil and natural gas wells or coal mines, since reliable data on those sources are not available in most countries.

"These sources could, nonetheless, represent significant levels of emissions," the IEA said.

It pointed to US Environmental Protection Agency (EPA) estimates indicating that such sources are responsible for almost 5% of energy-related methane emissions nationally. IEA also cited a recent study estimating that coalbed methane leaking from abandoned mines could account for nearly one-fifth of methane from worldwide coal production.

IEA Executive Director Fatih Birol said the agency's study shows stronger methane reduction actions will have to be taken by the 111 nations that signed the Global Methane Pledge at last year's United Nations' climate conference, a pact that committed those countries to cutting emissions by at least 30% compared with 2020 levels by 2030.

"A vital part of those efforts is transparency on the size and location of the emissions, which is why the massive underreporting revealed by our Global Methane Tracker is so alarming," Birol said in a statement.

The agency also noted that of the five nations with the largest energy sector methane emissions—China, Russia, the US, Iran, and India—only the US has signed the Global Methane Pledge. Thus, it said increasing the number of nations taking part in the pledge will be essential for making progress on climate change. 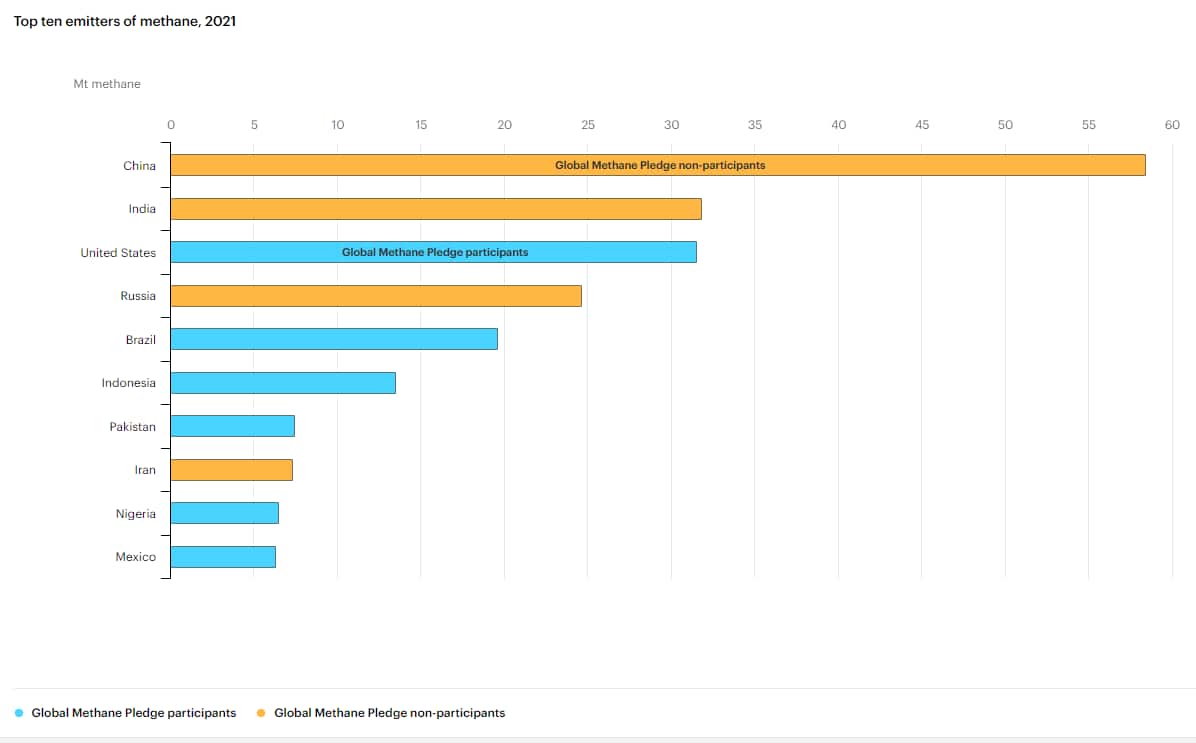 "If all methane leaks from fossil fuel operations in 2021 had been captured and sold, then natural gas markets would have been supplied with an additional 180 billion cubic meters (Bcm) of natural gas. That is equivalent to all the gas used in Europe's power sector and more than enough to ease today's market tightness," according to the report.

Additional supplies would be particularly welcome in Europe after Russia invaded Ukraine 24 February. Prior to the invasion, Germany—Europe's biggest energy consumer—suspended approval for the 55 Bcm/year Nord Stream 2 gas pipeline.

The IEA report for the first time included methane emissions from active coal mines, which along with leakage from upstream and downstream oil and natural gas operations made China the largest source of energy-related methane at 28 million metric tons (mt), followed by Russia at 18 million mt and the US at 17 million mt.

IEA noted that methane emissions rates from fossil fuel operations range widely from country to country, with the best-performing nations more than 100 times better than the worst performers. For oil and natural gas production, Turkmenistan, Venezuela, and Algeria have high methane intensity levels although their total emissions are relatively low compared to other nations. The US and Russia have higher total emissions while their methane intensity scores are relatively low.

That last category is included in the Global Methane Tracker for the first time, based on emissions factors from the Intergovernmental Panel on Climate Change for energy consumption in homes, industries, and transportation, the IEA explained. Some methane monitoring efforts suggest that emissions at end-use equipment are significantly underestimated, and the IEA vowed to update its estimates as the scientific evidence grows on that issue.

Among the seven global regions covered by IEA, only Europe had methane emissions reported to the United Nations Framework Convention on Climate Change (UNFCCC) above IEA estimates.

Many nations' official GHG figures reported to the UNFCCC have not been updated for years, and even those that have been updated use inventories that are not yet accurate enough to provide a clear picture of GHG emissions, IEA said.

The US EPA earlier this month released its draft GHG inventory to be filed with the UNFCCC, noting that total emissions for 2020 (the most recent year for full data) were about 10% below 2019 figures, largely due to effects from the COVID-19 pandemic, with less travel and economic activity, along with a drop in CO2 emissions in the power generation sector.

For countries looking to reduce methane emissions, the IEA noted that there are many approaches that have been taken with positive results, including in the US and Canada.

Canada's Natural Resources Minister Jonathan Wilkinson said in a statement alongside the report the country has set a target of reducing methane emissions by at least 75% below 2012 levels by 2030, and is putting into place regulations to help achieve that target. "This makes us the first country to sign up to the IEA's call to action," he added.

"If all countries implemented tried and tested policies that have already been used effectively in multiple settings, it would cut global methane emissions from oil and gas operations in half," the agency said. "These include banning non-emergency flaring, imposing mandatory leak detection and repair programs, and introducing equipment standards.

"Norway and the Netherlands have gone the furthest towards adopting a comprehensive regime, as they have robust measurement and reporting requirements, ensure best industry practices, and economic incentives that encourage abatement action," according to the report.

"Tried and tested approaches are already available for lowering methane emissions, but better and more transparent data are needed to facilitate targeted action," it added.

--Based on original reporting by Tom Tiernan for The Energy Daily,www.theenergydaily.com