In its World Energy Outlook 2020, released in November 2020, the International Energy Agency (IEA) for the first time added a scenario in which the world's energy sector would achieve net-zero emissions by 2050, as it underscored the importance of bringing the world's carbon emissions under control.

Compared to IEA's base case of a global recovery from Covid-19 by the end of 2021 and maintenance of national emissions goals (but no new goals), the Net Zero Emissions by 2050 (NZE2050) scenario would accelerate energy efficiency measures and installation of solar and photovoltaic power generation. NZE2050 also includes acceleration of energy efficiency programs and equity investments, such as universal substitution of cooking with biomass with propane or electricity.

"Primary energy demand in the NZE2050 falls by 17% between 2019 and 2030, to a level similar to 2006, even though the global economy is twice as large. Electrification, efficiency gains and behaviour changes are central to achieving this. Coal demand falls by almost 60% over this period to a level last seen in the 1970s," IEA said.

NZE2050 takes the SDS's modeling of about 26.7 Gigatons (Gt) of CO2 emissions in 2030, and then asks how this can be reduced to 20.1 Gt, which is the midpoint of the Intergovernmental Panel on Climate Change's estimate of the level of emissions that could enable the world to limit global warming to 1.5oC. This reduction would start the path towards zero net emissions in 2050. 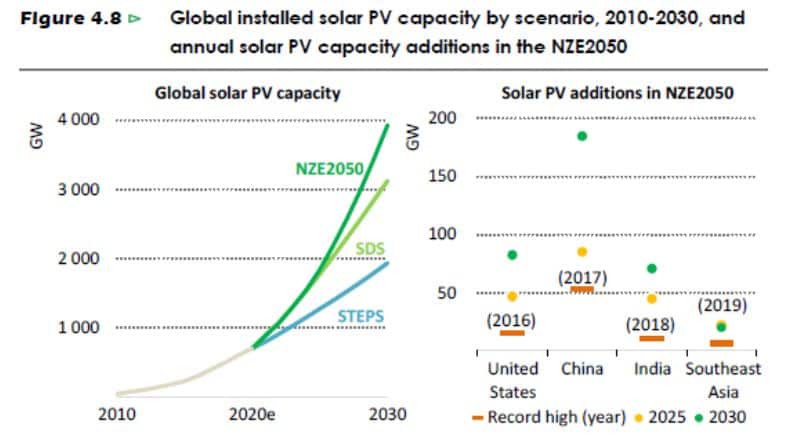 Those changes would drive down CO2 emissions from the power sector by 60% from 2019 through 2030. For context, IEA noted that the only recent example of a country's power sector reducing emissions at that pace is the UK during the period of 2008 to 2018. 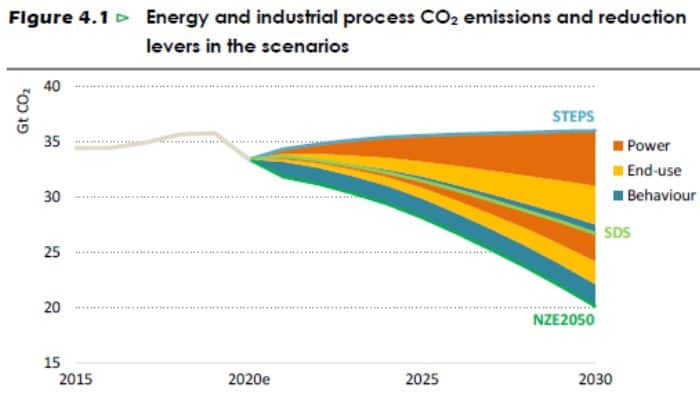 NZE2050 is very ambitious. The investment by the power sector would be immense: $2.2 trillion per year by 2030, with about one-third of that on strengthening and expanding the power grid. For comparison, global power sector investment in 2019 was $760 billion.

"Realising the pace and scale of emissions reductions in the NZE2050 would require a far-reaching set of actions going above and beyond the already ambitious measures in the SDS. A large number of unparalleled changes across all parts of the energy sector would need to be realised simultaneously, at a time when the world is trying to recover from the Covid-19 pandemic," IEA said.

In addition to shifts in power generation, another key element would be reduction in power demand. This would include 50% of new passenger cars in 2030 being electric, compared to 2.5% today. IEA notes that EV engines are fie times more efficient than internal combustion engines, which will further improve global energy efficiency.

Other measures would include retrofitting buildings to make them more energy efficient; use of electric heat pump systems in 100 million or more residences; mandating the use of ultra-efficient air conditioners; and electrification of one-third of low-temperature heating in industrial settings. IEA also forecasts that "green" hydrogen (hydrogen made through processes that do not generate carbon emissions) and other clean fuels would represent about 25% of the fuels mix.

IEA noted that the IPCC has created more than 90 forecasts of how the world can reach at least a 50% chance of limiting global warming to 1.5oC by 2100. In many ways, NZE2050 is more aggressive in renewables investments and more conservative about nuclear power and carbon capture than IPCC's 1.5oC scenario: