Grid-scale energy storage systems are unlikely to see any price declines until 2024, when manufacturing of lithium-ion batteries scales up to meet the increase in demand from automakers, according to an IHS Markit analysis of clean technology trends.

Released 3 February, the analysis finds that prices for lithium-ion batteries rose 10%-20% to $110 per kWh in the latter half of 2021, predominantly for LFP (lithium iron phosphate) cells, which is the favored technology for grid-energy storage.

However, IHS Markit analysts say these price hikes, which are driven by soaring raw material costs and demand from automakers, will be tempered by the anticipated rise in the global LFP cell production capacity.

Announced expansion plans currently suggest that LFP cell capacity across the globe will reach 330 GWh annually in 2025, compared with less than 200 GWh in 2020.

"In reality, capacity may reach much higher than this, as new expansions will be announced in reaction to increased demand," Sam Wilkinson, a director in the clean energy and renewables group at IHS Markit, wrote in a 6 January note on lithium-ion battery costs. 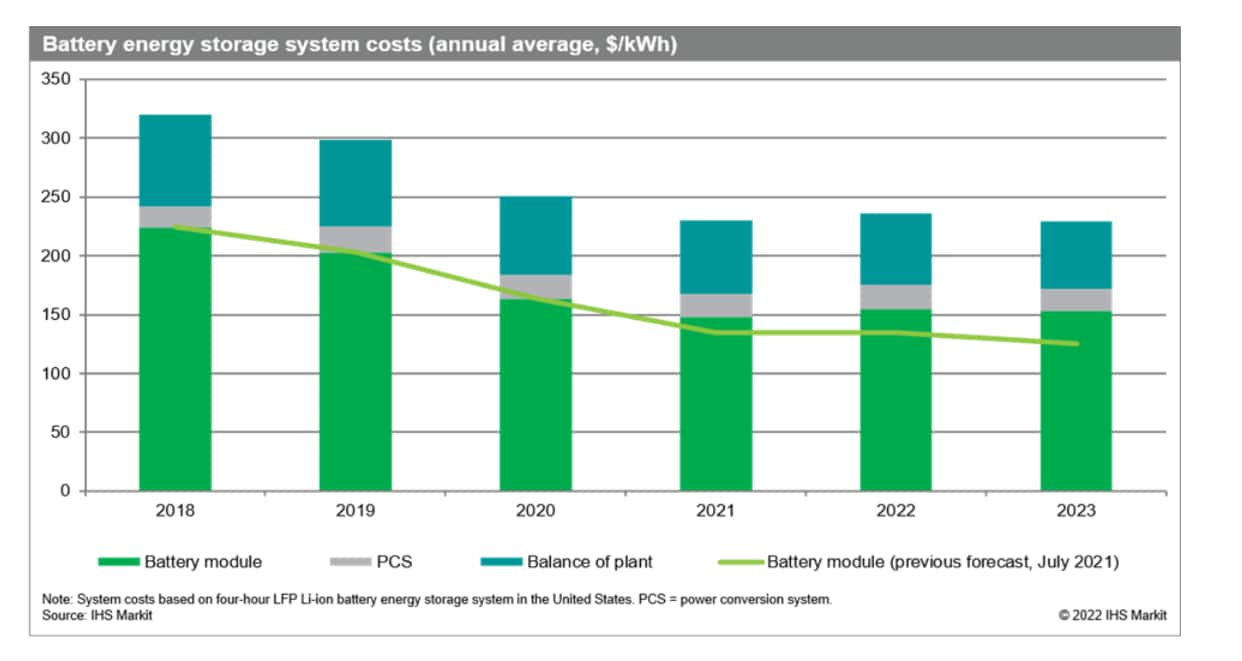 LFP batteries have been the choice of technology for the grid-scale energy storage industry in recent years due to their lower cost and better safety track record in comparison to the main alternative, NMC (lithium nickel manganese cobalt oxide) batteries, which automakers favored for EVs until 2020.

Some EV makers shifting to LFP

As automakers seek to ramp up their EV fleets in response to the net-zero pledges made by countries where they have a large market presence, such as China, Europe, and the US, they are seeing the value of LFPs. Last year, Ford took a cue from Tesla and indicated it would consider LFP cells for EVs.

Tesla announced in December it would begin offering its LFP-powered "standard range" models globally, rather than only in China as it had before. The EV giant already has positioned itself as the third largest energy storage integrator globally, holding 11% of the energy storage market.

But with automakers getting into the demand mix, the ample supply of LFP batteries that the energy storage industry enjoyed until 2020 is no longer the case, Wilkinson wrote.

The availability of LFP batteries depends on the pace at which automakers manufacture EVs using these cells as opposed other types of lithium-based batteries. In 2021, the automotive and transportation sector accounted for 80% of lithium-ion battery demand, a figure IHS Markit estimates is set to rise to 90% by the middle of the decade.

Any decline in the price depends on LFP manufacturing capacity quickly scaling up and energy storage system integrators securing supply agreements with a wider range of LFP suppliers that are less focused on the larger EV opportunity, according to IHS Markit.

S&P Global Platts reported that the seaborne lithium carbonate price soared 413% from the start of 2021 to $32,600 per metric ton (mt) on 14 December, while the lithium hydroxide price climbed 254% over the same period to $31,900/mt. Both compounds go in to making lithium-ion batteries, such as LFP, NMC, or nickel manganese aluminum oxide (NMA) options.

Battery cell manufacturers also have had to deal with the increases in prices of copper and aluminum, Wilkinson said. "In a bid to preserve—or even raise—margins, which have been persistently low, battery manufacturers have responded by increasing prices," he added.

Global LFP capacity could surge past the current forecast of 330 GWh in 2025, up from 200 GWh seen in 2020, Wilkinson added, as an increase in demand could spur more investment in production.